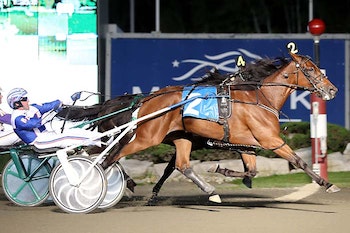 All the buzz is about Bee A Magician in this year's Oaks and with good reason. She's second only to Captaintreacherous in harness racing's Top Ten Poll and has won 8 out of 8 starts this year. She won her elim in 1:53.3. She won the Delvin Miller Memorial over Frau Blucher, a top contender and did it with a world record of 1:51. She's at 2-5 in the morning line and will probably go off at ridiculous odds, but it's hard to argue with what she's done so far this year. Brian Sears drives for Nifty Norman.

Mistery Woman is the other much talked about horse in this race. David Miller drives for Jonas Czernyson, who also has Ma Chere Hall, who lost to Bee A Magician in their elim. Mistery Woman, who had a very troubled start last year due to foot problems and sickness, still managed to win 3 out of 5 of her races last year. She also won her Oaks elim and was third in the Miller Memorial and second in the Reynolds Memorial. She has two wins, this season, out of seven races but has been in the trifecta 6 out of 7 times.

The second Czernyson entry, Ma Chere Hall, is a very tough little filly who has had a couple of rough trips lately, but still managed to hold her own. She was forced to check in the Miller Memorial, and won a division of the Reynolds Memorial in spite of an outside post. She also won a division of the Currier and Ives. With some better racing luck, she might figure in exotics in the Oaks. Corey Callahan will handle the reins.

Frau Blucher is a veteran of a very successful 2 year old campaign, winning the PA sire stakes in her division and has done very well in her 3 year old year, so far, also. She's driven by Jim Morrill Jr and trained by Chris Oakes, who also sends out Classic Martine in the Oaks. Oakes is the third winning trainer at Pocono with a good roster of young horses in his stable.

To Dream On, last year's Breeder's Crown winner, will be driven by Yannick Gingras and is trained by Jimmy Takter. She won 8 out of 9 races during her 2 year old season and is an off-the-pace type who might be in position to take a piece of the purse should the pace fit that scenario.

Coffeecake Hanover at 20-1, Fashion Athena at 30-1, and Time To Kill and Handover Belle both at 50-1 complete the field.

I expect Bee A Magician to be on the lead or in the pocket, and over the finish line first. Mistery Woman and Ma Chere Hall should be good for exotics.

Safe trips to the drivers and horses in this race and good racing luck.
Loading...