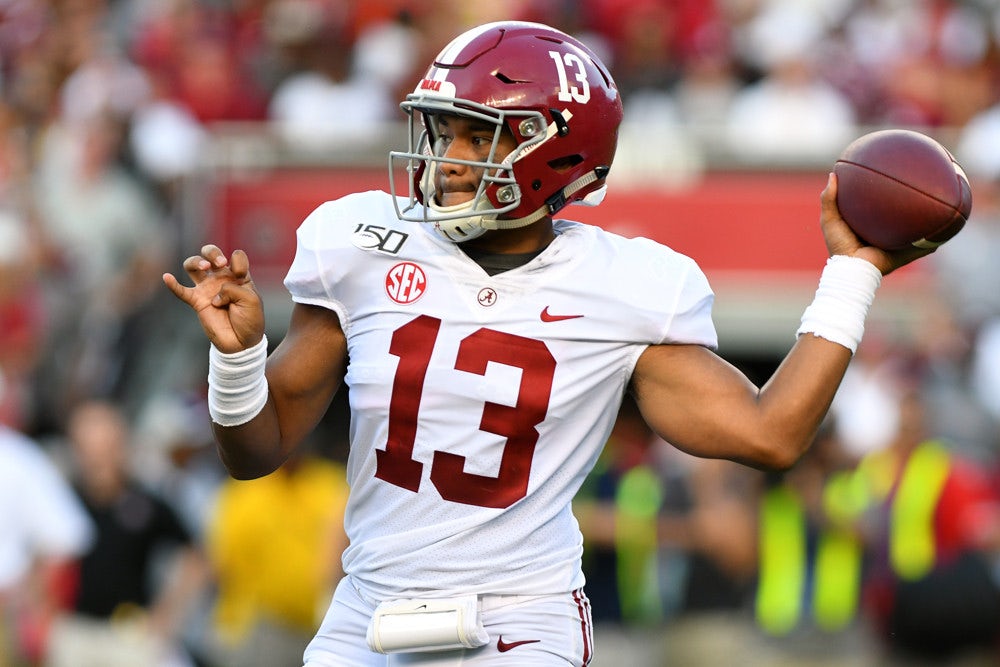 It’s not always end results that provide the lessons to be learned. Usually it’s the little things that aren’t in the box score that help us paint the picture of a team. Let's take a closer look at what we learned during Week 12 of the college football season.

Off a devastating loss at home to LSU, Alabama coach Nick Saban had a choice. He could rest recently injured star quarterback Tua Tagovailoa, or he could let him play. Early in the week most assumed that Tagovailoa would sit. The line adjusted accordingly from Alabama -21 to -17.5. However, as game time approached, the line crept back up to -21.

Tagovailoa played, and it was disaster.

With a huge lead and only a few minutes remaining in the first half, Nick Saban decided to keep Tagovailoa in for live reps in a two-minute drill. This proved to be a costly decision. Tagovailoa took a hit and dislocated his hip, which ended his season and put his pro prospects in question.
Alabama needed help to get into the College Football Playoff to begin with. There is a human factor to the voting, and I don’t believe the committee will have faith in an Alabama team without its star.

Minnesota ventured to Iowa off one of the most significant wins in the program's history. One would think the unbeaten Gophers would have been favored against an Iowa team with three loses. One would have been wrong, as bookmakers put up a line of Iowa -3. As ESPN Analyst Lee Corso would say, “Someone knows something about this game I don’t. I’m going with that someone.”

Sure enough, Iowa pretty much dominated the game and hung on to cover. It’s an important lesson to learn—perhaps the most important. We all should try to set our own lines before we see the real line. If the line departs from what we think it should be, question everything.

Michigan should not be overlooked

The Michigan Wolverines absolutely embarrassed Michigan State in a 44-10 victory.

This has been a trend since Michigan lost October 19 to Penn State. It seemed like something clicked during that game. After they trailed 21-0 to Penn State, the Wolverines found something and rallied back. They carried that momentum through routs of Notre Dame, Maryland and Michigan State.

A showdown with Ohio State looms November 30, and Michigan is a new team that shouldn’t be overlooked. The Wolverines will be an underdog against Ohio State, and we will look take advantage of that.


Wager on all NCAAF Week 13 action now at BetAmerica!