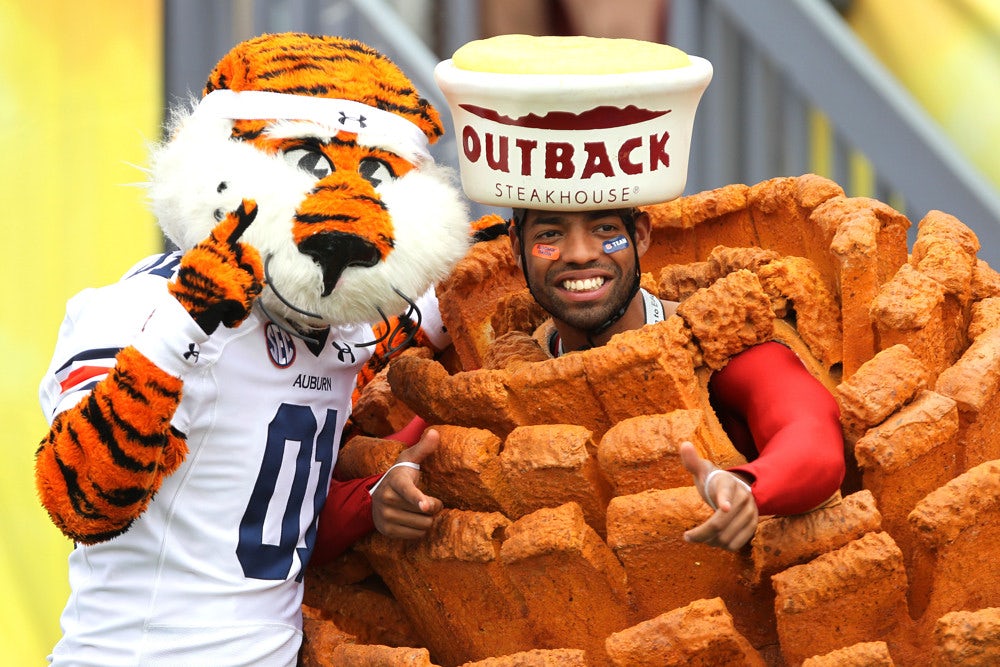 Perusing the list of lengthy and ludicrous college football bowl names is almost as entertaining as watching the games themselves. From the end of December to the National Championship Game on January 13, 40 different postseason exhibition games are set to take place, and there are no shortage of strange titles on the docket.

Had it been the Maker’s Mark bowl, it might have made the “best” list. Instead, it’s Makers Wanted, the slogan of the Illinois suburb Elk Grove Village, aka the “home to the largest industrial park in the United States.” Can you think of a more obvious choice to sponsor a game in the Bahamas?

The former Miami Beach Bowl relocated to Frisco, Texas in 2017 and has since transformed into the Tropical Smoothie Cafe Frisco Bowl. The name is a mouthful and invokes images of sand, beaches and drink umbrellas more than a gritty football game hosted in the Dallas-Fort Worth metro area.

Named after mythical pirate Jose Gaspar (seriously), the Bad Boy Mowers Gasparilla Bowl first existed as the St. Petersburg Bowl back in 2008, before it became the Beef O’Brady’s Bowl from 2009-2013.

In 2017 someone decided to spice up the postseason with more pirate references, and a partnership with Bad Boy Mowers would add some real muscle. On top of those changes, in 2018 the Gasparilla Bowl moved to Tampa Bay, the home of the Buccaneers. If the players are lucky, maybe Sea of Thieves will be a part of the 2019 gift package.

It’s a marked improvement from the Cheribundi Tart Cherry Boca Raton Bowl of 2017, but it’s still not great. The New York-based cherry juice company Cheribundi cleaned up the title in 2018 to make its bowl name less of a tongue-twister, though it may be better off going by something simple like “Cherry Bowl,” “Juice Bowl,” or “Superfruit Bowl.” OK, those aren’t any good, either.

Nothing says the holidays like San Diego County Credit Union. The generic “Holiday Bowl” is festive, but the lengthy title sponsor in front of it creates a bit of a distraction. On the plus side college athletes receive a gift suite and a Fossil watch as a reward for participating in the postseason contest—and all of it hassle free with no hidden fees!

If you’re a fan of the New York Yankees, you’re probably partial to the Pinstripe Bowl. The Bronx-based event at Yankee Stadium has been sponsored by New Era Cap Company since the bowl’s inception in 2010. Filled with baseball history and Big Apple pride, this outdoor football matchup provides an exhilarating yet chilly atmosphere, and its name is perfect for the backdrop.

This name is grrreat! Sorry, couldn’t resist. In 2019 Kellogg’s gained primary sponsorship of the Sun Bowl in El Paso, Texas, and gave its iconic Frosted Flakes mascot top billing on the marquee. The Sun Bowl has been around since 1935 and is the second-oldest bowl game, along with the Sugar Bowl and Orange Bowl. The name is silly, yes, but it’s a lot more appealing than the John Hancock Bowl (1987-1993), the Vitalis Sun Bowl (2004-2005) and the Brut Sun Bowl (2006-2009) of the past.

Previously the Humanitarian Bowl and the MPC Computers Bowl, the Famous Idaho Potato Bowl has been a mainstay of bowl season since 1997. In 2011 the Idaho Potato Commission signed a naming-rights deal to sponsor the event and bestowed college football with one of the oddest but most amusing bowl game names on the schedule. It also presented us with an unforgettable mascot, Spuddy Buddy.

You probably picture Australia, not Tampa, when you hear Outback Bowl. Or maybe you instantly think of Bloomin’ Onions from the titular casual restaurant chain. The Outback Bowl constitutes a rare case where the sponsor actually makes for a catchy bowl name. Fun fact: The nearest Outback Steakhouse to Raymond James Stadium, the site of the Outback Bowl, is just a six-minute drive.

The Rose Bowl has long exuded class and tradition, and not only features one of the best college bowl names, but it goes by a pretty sweet nickname too. "The Granddaddy of Them All” is the oldest operating bowl in college football and began in 1902 as the Tournament East-West football game.

Everything about the Tournament of Roses is awe-inspiring, from the Rose Parade to its colorful history. The Rose Bowl Stadium, one of the oldest venues in the country and one of the largest in the world, hosted the first Rose Bowl Game in 1923 and is considered a historic landmark in sports. It has staged Super Bowls, Olympic Games, a World Cup Final and numerous Pac-12/Big Ten matchups. In 2015 and 2018 the Rose Bowl also hosted a semifinal in the College Football Playoff. Dating back to 1945 it has achieved the highest attendance of all college football bowl games.


Bowl season is just around the corner! Check out BetAmerica for all your college football wagering needs!