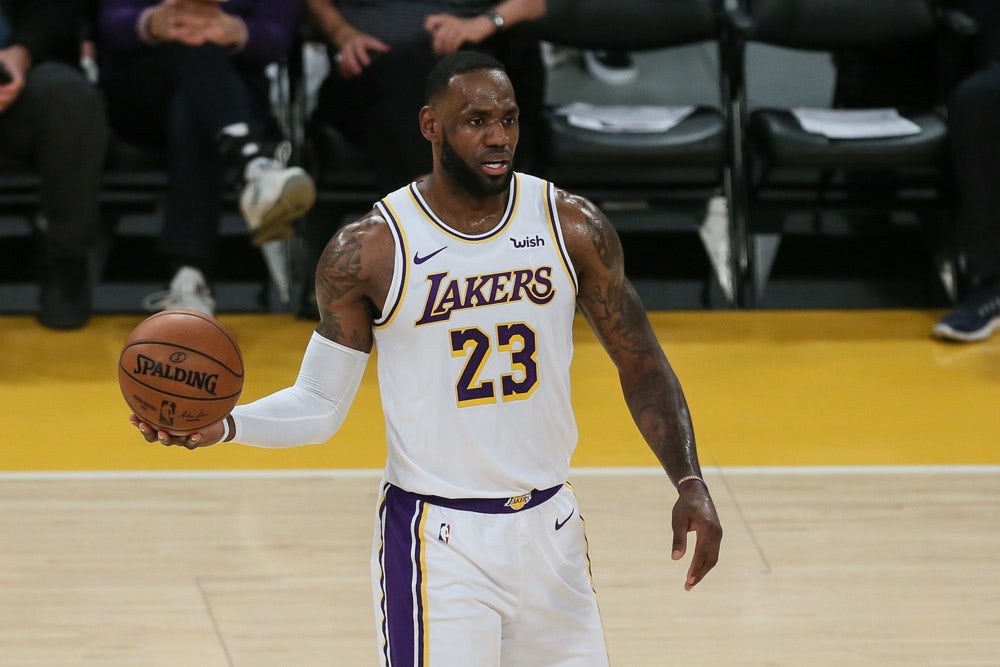 Kyrie Irving and LeBron James will add another chapter to their legendary rivalry on Thursday night when the Los Angeles Lakers visit the Brooklyn Nets at Barclays Center. Over in Pacific Northwest, Damian Lillard and Luka Doncic will go toe-to-toe when the Dallas Mavericks take on the Portland Trail Blazers at Moda Center. We have odds and picks for both marquee matchups below.

The Lakers have their mojo back. Los Angeles bounced back from a colossal 32 point loss to Boston on Monday by silencing New York 100-92 at Madison Square Garden last evening. LeBron James set the tone early with 19 points in the first half, and Anthony Davis shut the door on the Knicks with 17 points after the break.
The Lakers will try to make it two straight in the Empire State when they take on the reeling Nets tonight. Brooklyn has lost 11 of its last 13 and has posted one of the league's worst offensive ratings during that span. Part of their woes can be blamed on the absence of Kyrie Irving, who missed seven of those contests with a shoulder impingement, but the Nets' downturn goes beyond just Uncle Drew. Brooklyn ranks 19th in pints per game, 24th is field-goal percentage, and 28th in three-point percentage. Experience has taught us that it's hard to win when you can't get the damn ball through the hoop.

Things should get considerably better next season when Irving is flanked by dead-eye shooters like Kevin Durant and Joe Harris, but until then they'll be fodder for superior squads like the Lakers. Take L.A. and the points tonight.

Murphy's law has been in full effect this season in Portland, where the snakebitten Blazers have struggled with injuries to key personnel. Jusuf Nurkic, Zach Collins, and Rodney Hood have all missed large parts of  2019-20, forcing general manager Neil Olshey to get creative with free agent signings and under-the radar trades.

The result has been a dismal 19-26 record and one of the league's most porous defenses. The Blazers rank 24th in defensive rating and are getting murdered in the paint, where they're giving up 48.5 rebounds per contest. Their inability to clear the boards has led to a series of crushing defeats, including a 122-101 loss to Milwaukee in which they were out-rebounded 68-56.

Dallas, on the other hand, has exceeded all expectations this season. The Mavs are 27-16 and in fifth place in the Western Conference thanks to the wizardry of Luka Doncic. The sophomore sensation is averaging 29.7 points, 9.7 rebounds, and 9.0 assists per season and leads the league in triple-doubles. Thanks to Doncic, the Mavs rank in the top three league-wide in offensive rating, true shooting percentage, and points per game.
Tonight's game will mark the second time the Mavericks and Blazers have clashed in the past seven days. Dallas won their last meeting 120-112 behind a game-high 35 points from Doncic. The 20-year-old guard nailed a career-high eight three-pointers while also chipping in eight rebounds and seven assists. Damian Lillard paced the Blazers with 34 points, but shot just 1-of-6 in the fourth quarter as Dallas ratcheted up the pressure. Bettors can expect another similar result tonight as the tandem of Doncic and the recently returned Kristaps Porzingis will be too much for Portland to contain.