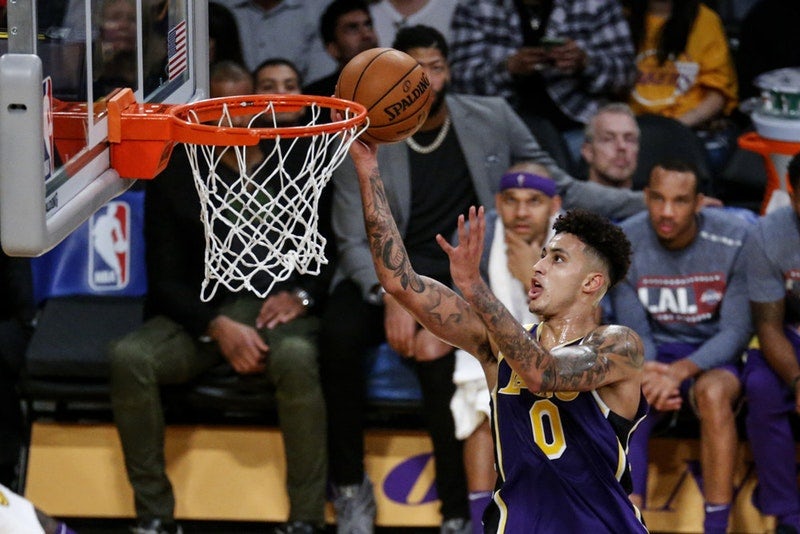 The NBA Trade Deadline is now right around the corner, and the rumor mill continues to churn out juicy tidbits and speculation, setting the stage for what could be another frenetic day of blockbuster moves.

We’ve talked in this space before about Kyle Kuzma, and the trade rumors aren’t going away. In fact, it seems they’re only just heating up leading into next Thursday’s trade deadline.

Earlier this month, with LeBron James and Anthony Davis both out of the lineup, Kuzma stepped in and had his two best performances for the Lakers. Since both stars returned to action, Kuzma has seen his minutes drop, as well as his point production. In L.A.’s last game, on Jan. 25 against Philadelphia, Kuzma went two-for-six from the field and had four points in 27 minutes.

Kuzma won’t be able to escape the rumor mill until the absolute deadline has passed, and he’s still a Laker. And even then, there may only be a brief reprieve.

Whether Kuzma moves or doesn’t move at the deadline could depend on the influence of LeBron James. The Lakers are likely going to want plenty back in return.

Speaking of L.A., there are reports that the Lakers are seriously interested in Bogdan Bogdanovic.

He’s a restricted free agent in the summer, which could put pressure on the Kings to move him. The Lakers are reportedly not the only team interested in the 27-year-old shooting guard, who is a career 37.5% shooter from three-point range.

Could the Kings start a bidding war over the next few days, with eyes on a substantial haul for the future?

We welcome Gordon Hayward to the rumor mill. The Boston Celtics are third in the Eastern Conference, behind the first-place Milwaukee Bucks, and could certainly make some noise in the postseason.

They could also make some noise at next week’s trade deadline, with speculation about the future of Hayward coming to the forefront.

Most of that has to do with the fact Hayward is a pending free agent at the end of next season. In the final year of a four-year deal, the 29-year-old Hayward is averaging over 17 points per game, and has been on a nice run in the past week, scoring 20 points or more in four straight contests.

There were reports last summer that Boston was approached about a possible Hayward trade and those talks didn’t go far at all.

Maybe the Celtics are more open to discussions right now with a deadline approaching, but what could’ve changed so much that they’d go from, "No way, not interested" in the summer to, "Let’s get a deal done for this guy" at the deadline?

The 24-year-old power forward is averaging 14.5 points per game for the Orlando Magic this season. Despite four losses in a row, the Magic are still in a playoff hunt in the Eastern Conference.

Recent reports suggest it’s the Minnesota Timberwolves that are perhaps interested in acquiring Gordon’s services, as they look to rebuild their program.

Gordon is in the second year of a four-year, $80 million contract. It’s relatively early in this deal, but there have already been rumblings from pundits that he’s in need of a change of scenery.

That’s not a good sign. But that also doesn’t mean something gets done within the next week.

Marcus Morris is a potential free agent at the end of the season, which, in theory, would make him a possible trade candidate. The New York Knicks are (a mess) and not going to the playoffs this year. That checks another box.

There are reports that Morris and the Knicks are interested in getting a contract extension done. Then again, there are also reports that the L.A. Clippers could be interested.

The Clippers went all in last summer by bringing in Kawhi Leonard and Paul George. If they’re again aggressively pursuing an impact player, they’ve already shown a willingness to pay a premium price.

Bet $50 and get $5 for every TD with BetAmerica's Big Game Touchdown Special!