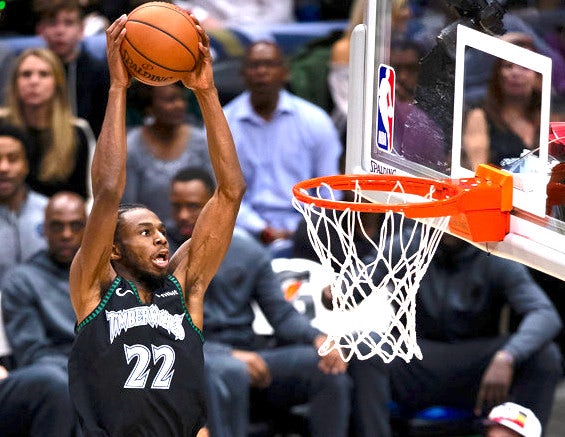 Robert Covington, who we have discussed here in previous weeks, is on the move from the Minnesota Timberwolves to the Houston Rockets in a massive four-team trade that went down Tuesday night. Clint Capela was another big name involved in that trade.

Another member of the Timberwolves is now rumored to be on the block, as Minnesota’s rebuild kicks into gear.

A change of scenery could be in the cards for Andrew Wiggins, the No. 1 overall pick in the 2014 NBA Draft.

Rumors earlier this week had the Timberwolves potentially moving the 24-year-old to the Golden State Warriors. Wiggins is in the second year of a lucrative, five-year, $147 million contract.

Wiggins is averaging 22.4 points per game, almost five points above his career average, but he’s been struggling of late and scored a season-low 10 points against the Sacramento Kings.

The Timberwolves have lost 12 in a row. They’re tumbling down the standings in the Western Conference and closing in on Golden State for the worst record.

Prediction: The Timberwolves have already made one move to accelerate this rebuild. When roster deconstruction begins, more major moves are usually on the way. I'm not sure this will involve trading Wiggins—at least not by tomorrow’s deadline.

Warriors point guard D’Angelo Russell is reportedly a player Minnesota has interest in acquiring in a trade that would (or could) involve Wiggins.

Discussions between the Warriors and Timberwolves appear to have hit a snag.

The 23-year-old Russell—the second overall pick in 2015 – is averaging 23.8 points per game this season, above his career average.

Russell is in the first year of a four-year, $117 million max contract. But the Warriors also won’t move him for nothing.

Prediction: A few teams are interested in Russell, so the Warriors can start the bidding process to suit their needs when it comes to salary and draft picks. There's no need to move a player if management is unhappy with proposed compensation. Russell could be on the move, but it’s not going to be tomorrow unless a team pays up.

Latest reports have the Phoenix Suns interested in acquiring Luke Kennard from the Detroit Pistons.

Kennard hasn’t played since Dec. 21 because of a knee ailment, and there doesn’t appear to be a timeline for his return. That could hamper any potential deal for tomorrow.

Prediction: If Phoenix is willing to give Detroit a first-round pick in a deal that involves Kennard, the Pistons should jump at the opportunity. This is a trade chip the Pistons can’t afford to sit on, so a deal involving the 23-year-old point guard will get done tomorrow.

There are a pair of New Orleans Pelicans guards mentioned in trade rumors this week. The first is Jrue Holiday.

Holiday has spent the last seven seasons in New Orleans and is averaging 19.4 points per game this season. He’ll have two more years left on his contract after this season, with an average annual salary of just more than $26 million.

J.J. Redick has popped up in trade rumors, although reports have indicated the Pelicans haven’t done much listening.

Redick, 35, remains a consistent three-point shooter, successful on 46.3% of his shots from beyond the arc this season.

Signed by the Pelicans to a two-year contract in the offseason, Redick has been a nice addition to this roster, and although the Pelicans are likely not going to the playoffs, he could provide value to a contending team.

Prediction: It seems the Pelicans are holding out until they have the absolute best deals on the table for both players. I'm not sure one will materialize before tomorrow’s deadline.

Get in the game with BetAmerica's NBA odds, props, and futures!