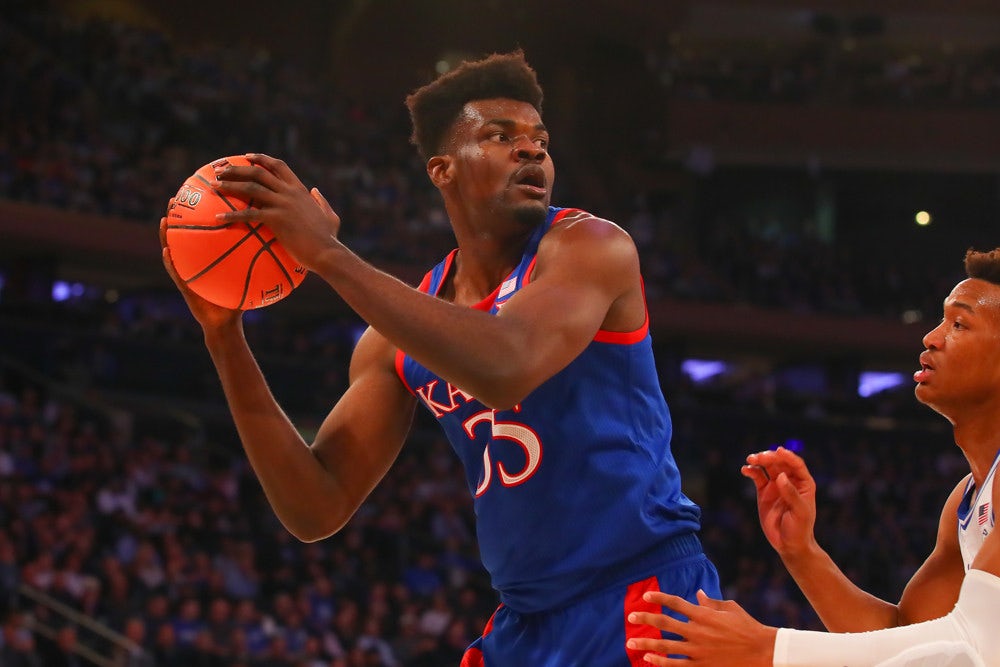 Kansas Jayhawks center Udoka Azubuike controls the ball during the first half of the State Farm Champions Classic. (Photo by Rich Graessle/Icon Sportswire)

The Jayhawks are looking for their 10th conference win of the season. If successful Wednesday night, they’ll record the 26th consecutive season with 10 or more conference wins, the longest streak in the country.

Kansas is currently second in the conference standings, only behind 11-0 Baylor. West Virginia is in fourth at 6-4, behind 7-4 Texas Tech.

Bill Self’s team has put together an impressive tournament résumé, with 10 Quadrant 1 wins. Their strength of schedule is No. 1 in the country.

Kansas will need another big performance from Udoka Azubuike if it wants to get the tough road win. Azubuike has been a beast for the Jayhawks, and is one of three players in the country averaging a double-double. His 13.7 points per game are topped only by sophomore Devon Dotson’s 18 points per game on the team, which leads the conference.

Wednesday’s matchup is an important opportunity for West Virginia. After a loss to Oklahoma, the Mountaineers dropped one spot to No. 14 in the AP Top 25 and will have a tough week, with matchups against Kansas and No. 1 Baylor.

Mountaineers head coach Bob Huggins has some bragging rights on the line in Wednesday’s matchup, as well. On Feb. 1 he moved past Adolph Rupp on the Division 1 all-time wins list. One more win and he'll be in a tie with Dean Smith for sixth place. He is three wins behind North Carolina head coach Roy Williams.

Huggins has the fourth-most wins among active coaches at the Division I level, behind Mike Krzyzewski, Jim Boeheim and Williams.