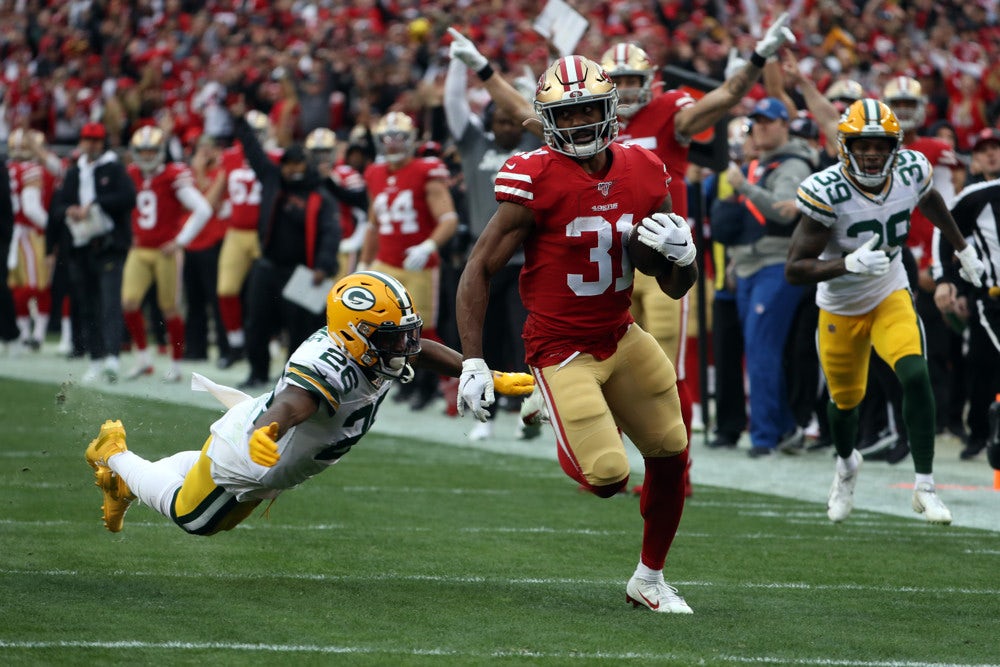 San Francisco 49ers running back Raheem Mostert breaks away to run for a touchdown. (Photo by Kiyoshi Mio/Icon Sportswire)

With every Super Bowl there are plenty of stories, matchups, and factors that contribute to the outcome. Every detail will be combed through in the next two weeks in anticipation of the big game, but we're getting an early start. Here are the the three biggest storylines of the game.

3. Will the 49ers defense be able to stop the Chiefs offense?

After the Chiefs fell behind early to both the Texans and Titans, their potent offense became unstoppable in each game. Those opponents, though, do not have the defensive prowess of the San Francisco 49ers.
Built with a stout defensive line, speedy linebackers, and a veteran secondary, this 49ers defense is legitimate. But will it be able to stop such a potent passing attack? The only comparable offense they’ve faced in 2019 was the Saints, who scored 46 points (but the 49ers won).

2. Will Mahomes continue his breakneck pace?

Chiefs quarterback Patrick Mahomes has thrown for 767 yards, eight touchdowns, and zero interceptions in the playoffs. He has also added 106 yards and  a touchdown on the ground.

With all due respect to eventual MVP Lamar Jackson, Mahomes—last season's MVP—is playing at an MVP level. The question that remains is whether he will continue at this level in the encore of the season. If Mahomes and his team plays to the level he is capable of, it’s hard to believe any defense in the league can stop him.

1. Will the 49ers overpower the Chiefs?

It's no secret what the 49ers want to do. While quarterback Jimmy Garoppolo has been a successful passer in 2019, much of his success has come because of the effectiveness of the San Francisco power running game.

Running back Telvin Coleman went down with an elbow injury in the NFC Championship Game against the Packers, so the next man up, Raheem Mostert, racked up 220 yards and four touchdowns. Mostert was the most efficient running back in the league this season, with an average of 5.6 yards per carry. Will the Chiefs, who ended the regular season 29th in the NFL in rush yards per attempt allowed, be able to slow down Mostert?

We still have to wait a little while for the game, but Super Bowl odds and props are up and ready to go at BetAmerica!