8 prop bets to make on the NFL conference championships 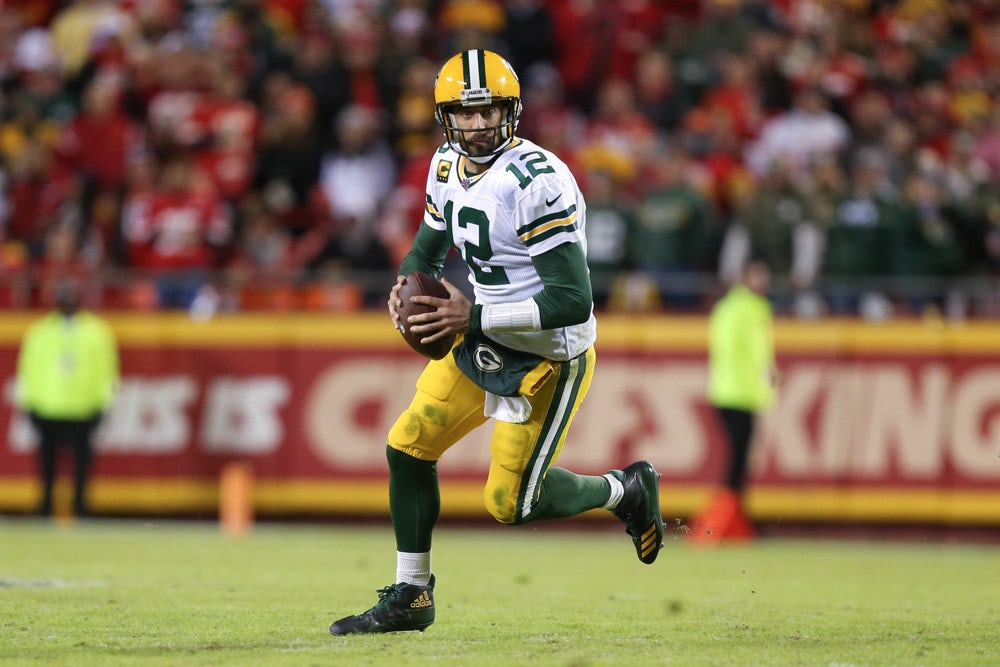 Sunday’s AFC and NFC championship games will decide which two teams will compete in Super Bowl LIV in Miami on Feb. 2. The Tennessee Titans hope to pull off one more upset at the Kansas City Chiefs’ home of Arrowhead Stadium at 3:05 p.m. ET. Then the Green Bay Packers get a rematch with the San Francisco 49ers’ stingy defense at 6:40 p.m.

Below are eight championship-round prop bets you can make on Sunday’s matchups, including highest-scoring team, most passing touchdowns, and lowest-scoring game.

Patrick Mahomes is the clear frontrunner for most passing yards Sunday. The Chiefs quarterback threw for 321 yards in Kansas City's 51-31 come-from-behind rout of Houston and has averaged 273.8 yards (most of the four remaining starting QBs) over his past five games.

The Titans have surrendered 277 passing yards per game in the playoffs, so Mahomes should be able to rack up yardage. Back in Week 10 Mahomes accumulated 446 passing yards in Kansas City's 35-32 loss to Tennessee.

Packers quarterback Aaron Rodgers passed for 243 yards in the Divisional Round against Seattle, but last time out at San Francisco, he managed 104 yards.
Ryan Tannehill is another player to shy away from, as he's generated just 80 yards per game through the air in the playoffs. That's largely because of Tennessee's focus on Derrick Henry and the run game, and the offense should continue to work through the tailback against the Chiefs' 26th-ranked rushing defense.

Mahomes again is the top choice for most passing touchdowns Sunday, after he piled on five against Houston in the Divisional Round. Before that game, though, he averaged 1.4 passing TDs in the last five games of the regular season.

While Tannehill has produced the fewest passing yards of the quarterbacks left in the postseason, he has still been called upon for big plays to the end zone and reeled off two passing touchdowns against Baltimore last weekend.
From Week 10 against Kansas City until the final week of the regular season, Tannehill passed for at least two scores in each game and averaged 2.3 passing TDs in that span.

The Chiefs secondary is far more talented than its run-stopping unit, but Tannehill may be called upon to change up the pace and could end up with the most passing TDs of the four quarterbacks.

Henry is the player to watch on Sunday. The NFL's rushing leader has been the key to the Titans' unexpected run, as he's broken through defenses and appeared impossible to tackle. His 195 yards against the Ravens on Saturday marked his third straight game with more than 180 yards on the ground. He is the first player to accomplish that feat in the NFL.
Against the Chiefs in the regular season, Henry collected 188 yards on the ground.

If Kansas City can somehow stop the bell-cow back this time, the next-best option for rushing leader in the conference championship round can be found in San Francisco.

In the last five games of the regular season, Mostert served as the lead back, but it may be Coleman's turn to step up Sunday. Coleman could surpass Henry for rushing yards this weekend.

Green Bay receiver Davante Adams had 160 receiving yards against Seattle's 26th-ranked defense last week. Now he'll go up against the best passing defense in the league. The star wideout led his team in receiving yards in Week 12 against San Francisco, though he pulled in seven catches for only 43 yards.

The better option in this matchup is George Kittle. The 49ers tight end reeled in six receptions for 129 yards against the Packers in the regular season, and he's due for another huge game after he laid low (three catches, 16 yards) against Minnesota.

The best bet, however, is on one of two receivers in Kansas City. Tyreek Hill notched 157 yards on 11 catches the first time the Chiefs played Tennessee. The Titans will probably focus on the wideout this game, which should open up the field for tight end Travis Kelce.
Kelce had 75 receiving yards against Mike Vrabel's squad in Week 10, and he registered 134 in the Divisional Round against Houston. The Titans allow the eighth-most yards to tight ends, so a Kelce showcase could be in store.

Based on Saturday's 51-31 shootout with Houston, the Chiefs are primed to put up points fast and often. Their opponent Sunday is averaging 24 points per game in the postseason but tallied 35 against the Chiefs in Week 10. The total for that game hit 67.

Tennessee has given up an average of 12.5 points per game in the postseason, and the Titans defense might find some success holding back Kansas City.

The Packers surrendered 37 points to the 49ers in Week 12 and 23 points to Seattle last week. This prop bet should come down to the Chiefs and Niners, and San Francisco has a solid chance of sneaking past the Chiefs as the highest-scoring team.

It's difficult to imagine the 49ers' pass defense permitting too many opportunities for the Packers. The Chiefs defense, on the other hand, has holes—especially against the run—and its conference clash should see far more scoring.

Kansas City allowed Houston to gain 442 yards of offense in the Divisional Round. The Titans defense conceded an average of 418.5 yards through two playoff games. Expect another shootout at Arrowhead Stadium and a total score in the mid-50s.


Bet each conference matchup, plus playoff props, at BetAmerica!