Can Joe Burrow turn the Bengals into a playoff contender? 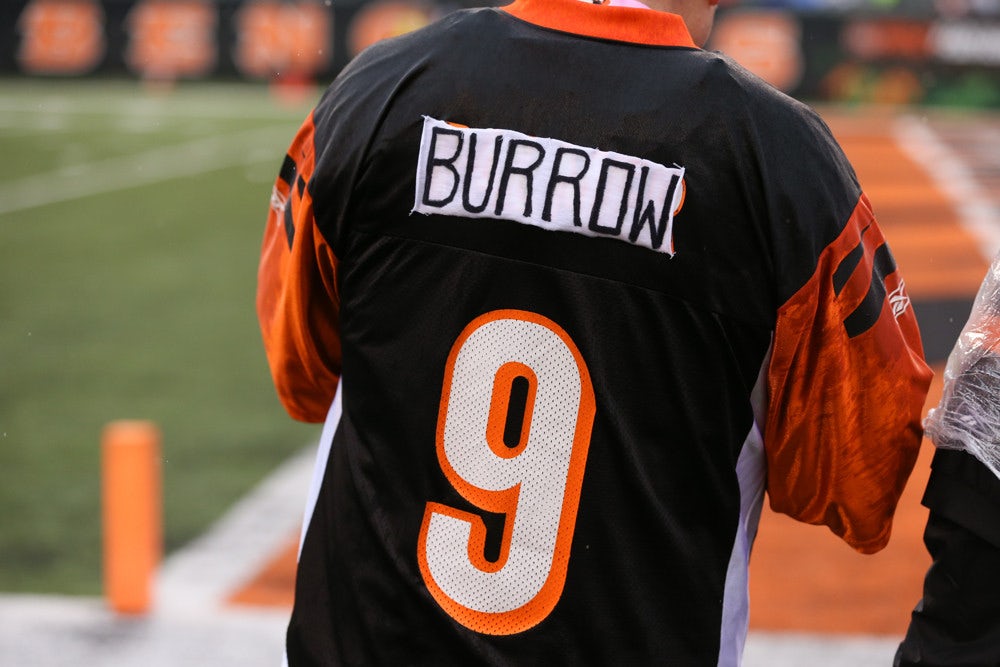 A Cincinnati Bengals fan wears a modified Joe Burrow jersey before a game against the Cleveland Browns in December. (Photo by Ian Johnson/Icon Sportswire)

It is pretty much a done deal that the Cincinnati Bengals will call Joe Burrow's name with their No. 1 pick during the NFL Draft on April 23. But will he be able to turn the franchise around? One of the most important factors on any playoff team is a playmaker at quarterback. The Bengals hope Burrow will be just that.

The quarterback position was ugly for the Bengals this season. Head coach Zac Taylor even decided to bench 32-year-old Andy Dalton for fourth-round pick Ryan Finley. That decision did not change anything. The quarterbacks combined for a 57.8% completion percentage, 18 touchdowns, and 16 interceptions. The impact of the decision was the clear message that the franchise would move on from Dalton next season.
The bright spots for the Bengals offense are at the skill positions. Running back Joe Mixon showed resiliency and leadership in 2019. In a lost season, with a struggling offensive line, he managed to average 102 rushing yards per game over his last eight games. Pro Bowl wide receiver A.J. Green sat out the entire season with injuries, but he is an unrestricted free agent, so it is unknown if he will be one of Burrow's weapons next season. Burrow will have Tyler Boyd, who has put together two straight seasons with more than 1,000 receiving yards. He will likely serve as the No. 1 option for Burrow.
Quality players at wide receiver and running back can be held back by poor offensive-line play. This was certainly the case for the Bengals in 2019. Pro Football Focus ranked the Bengals as the third-worst offensive line in the NFL last season. The Bengals had five linemen play more than 500 snaps and none graded in the top 50% of players at their position.

The Cincinnati defense is a good mix of veterans and young players, but struggled against the run. It finished last in the league at 148.8 yards per game. Only three teams have allowed more rushing yards per game in a season since 2012.

Cincinnati spent its 11th overall pick in the 2019 draft on offensive tackle Jonah Williams, out of Alabama. He spent the entire season on injured reserve, so the Bengals will hope to gain a monster on the offensive line next season. They also will likely look into the free-agent market for another lineman to help protect their franchise quarterback.

But the Bengals are currently in the middle of the pack (16th) in salary-cap space. They may be able to move Andy Dalton in a trade, but assuming they cannot find a buyer, that will be a $17.7 million hit in his final contract year. They could try to trade for Washington's Trent Williams, who is also in the last year of his contract and sat out the 2019 season. The list of mid-range talent in free agency is decent and could be snagged for a minimal salary hit.

The Bengals will also need to improve their passing weapons if they are unable to bring back Green. Boyd is great and John Ross has the deep-play ability Burrow needs, but they will need more options. There is not a lot expected from the free-agency market, so the draft will likely be where these improvements will come from.


If you already have your Super Bowl gambling itch, check out BetAmerica's betting options!