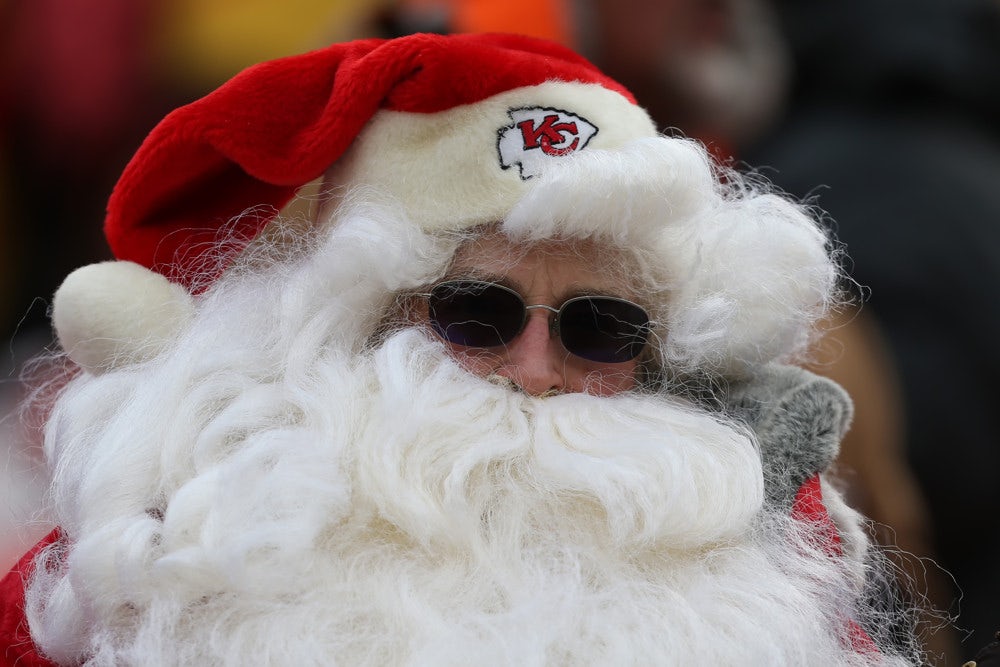 Let’s assume every NFL franchise made Santa’s “nice” list—even Cleveland. With the holidays edging closer, here is what each NFL team should ask for this Christmas.

Kliff Kingsbury ushered in a new era of offense in Arizona. Now the Cardinals need to upgrade the defense. Their stop unit gives up the most passing yards (294.2) and total yards (414.7) per game, and the run defense is pretty poor (24th in the league), too.

The Falcons asked for one last year, but Santa didn’t deliver. Maybe 2020 will bring better luck. Quarterback Matt Ryan has been sacked 39 times through 13 games (including a nine-sack outing against New Orleans) and is on pace to break last season’s mark of 42 sacks.

Buffalo benefited from adding receivers John Brown and Cole Beasley in the offseason, but outside of those two, QB Josh Allen doesn’t have many reliable options. The Bills rank second in passes dropped, with 20, and generate the sixth-fewest passing yards per game.

Head coach Ron Rivera is in search of another job, and Cam Newton is almost certainly out as a Panther in 2020. Carolina owner David Tepper is pursuing a team makeover, and an offensive-minded head coach, who can build around star running back Christian McCaffrey, might inject some life in the Panthers organization.

Cincinnati has faced issues with ownership decisions, injuries to star players (A.J. Green) and the performance of longtime starting quarterback Andy Dalton. With a 1-12 record, the Bengals are nearly guaranteed the first pick in the 2020 draft but need a lot more than one high-end player to fix the problems in Cincy.

Chicago has the slightest chance at making the playoffs, and the Bears need Trubisky to finally—after three patient and painful seasons—measure up to his status as the No. 2 overall draft pick from 2017.

The Browns entered the 2019 season surrounded by hype, mostly as a result of an Odell Beckham trade, but nothing materialized. Beckham created distractions on the field, Baker Mayfield snapped at a reporter and Myles Garrett infamously slammed Mason Rudolph with the Steelers QB’s own helmet in an absurd meltdown during Week 11.

Somehow Jerry Jones has yet to pull the plug on Jason Garrett, but it’s becoming all too obvious the 10-year head coach in Dallas has overstayed his welcome. Dallas’ roster is filled with talent, but the team is just 6-7. It’s time to find new leadership.

Rookie Drew Lock has shown promise in two starts, but it’s too soon to say if he is a long-term answer at quarterback. Since Peyton Manning’s retirement in 2016, the Broncos have gone through seven starting quarterbacks: Trevor Siemian, Paxton Lynch, Brock Osweiler, Case Keenum, Joe Flacco, Brandon Allen and Lock. Someone’s gotta be a fit in Denver.

The Lions defense is 28th in sacks per game (1.9), and opposing quarterbacks are averaging a passer rating of 100.5 against the unit. The Detroit offense has had its share of trouble, mostly because of injuries, but the defense is a huge liability.

The 10-3 Packers are guaranteed to host a playoff game if they can maintain possession of the No. 2 seed in the NFC. Playing at Lambeau Field is tough enough, but add in the potential for snow and freezing temperatures, and no one will feel good about encountering Green Bay in the playoffs.

Defense is bringing down the Texans. Houston gives up 265.8 yards per game through the air (sixth-worst in the NFL), and opposing quarterbacks are completing 65.42% of passes against the Texans.

After the Colts lost franchise QB Andrew Luck to unexpected early retirement, they succumbed to injuries on offense, and the “Iceman” Adam Vinatieri missed eight field-goal attempts, including a potential game winner against the Steelers, and six extra-point attempts in his 24th season in the NFL. Could Indy have been any unluckier in 2019?

Nick Foles signed a four-year, $88 million contract, with $45 million guaranteed, ahead of the 2019 season. Then he broke his collarbone in Week 1 and floundered after his return in Weeks 11-13. The Jaguars are in a bad spot with Foles’ contract, and the best-case scenario is to move him to another team via trade.

The Chiefs had Super Bowl hopes in 2018, but Patrick Mahomes’ exceptional play on offense couldn’t compensate for Kansas City’s defense. In 2019 the Chiefs got better against the pass, but the run defense still can’t seem to stop anyone.

It can be difficult to tell when you’re attending a Chargers home game, because fans of the opposing team often outnumber supporters of the former San Diego franchise. The Chargers didn’t experience the warmest welcome to Los Angeles, but maybe in time the city will warm up to the Bolts and create a true home-field advantage.

The Rams signed Goff to a four-year, $134 million contract ($110 million guaranteed), so moving on from the turnover-prone QB isn’t a realistic option. The best L.A. can ask for is drastic improvement from the fourth-year signal-caller in the coming year.

The 3-11 Dolphins are sitting on 14 picks in the 2020 draft, with three in the first round. The right moves in 2020 could launch this bumbling team into prominence in the next three years.

At 9-4 the Vikings are barely holding on to the sixth seed in the playoffs, and the Rams are slowly creeping in. With games against the Chargers, Packers and Bears remaining, the Vikes could easily slip out of the playoff picture.

The Pats offense is struggling, and Tom Brady is partially to blame, but a lot of the onus is on young receivers missing routes. If Brady can get on the same page with his receiving corps, the Pats might be able to get back to the Super Bowl.

New Orleans is on the hunt for a Super Bowl and fell just short of the big game last season, after NFL officials missed a blatant pass interference call. Officiating has been pretty pathetic in 2019, and the Saints are probably praying for a better bunch of referees come playoff time.

Sixth-overall pick Daniel Jones earned the starting quarterback job over Eli Manning in Week 3 and has proven to be just as turnover-prone as his predecessor. Jones has committed a league-leading 15 fumbles and could use some ball-security drills in the offseason.

Week 7 brought us the haunting of Sam Darnold. Against the Patriots the second-year QB saw “ghosts” on the field, as the Pats’ defense picked him off four times and held him to 34.4% passing. Darnold has gotten better since, but maybe a Ghostbuster could mitigate some of his issues next season.

The Raiders are set to call Las Vegas home in 2020 and need plenty of moving boxes. Not too many, though. It’s not like Oakland has a ton of trophies to transport.

The Super Bowl LII winners have experienced major regression, and while you could blame it on injuries or bad luck, coaching has a lot to do with Philly’s struggles.

27. Pittsburgh Steelers — another option at receiver

JuJu Smith-Schuster had the fifth-most receiving yards in the league last season, but his production has dipped in 2019, because of injuries, QB changes and opposing defenses double-teaming the third-year wideout. The Steelers need another viable threat in the receiving corps to help lift the Steelers offense and give Smith-Schuster some breathing room.

Few expected such a resurgence from the 49ers in 2019, but head coach Kyle Shanahan transformed a four-win team in 2018 into a Super Bowl contender. These Niners are eyeing a shiny Super Bowl ring and deserve to collect one at the end of the season.

Earl Thomas is now on the Ravens. Richard Sherman plays for the Niners. The rest of the founding members of the Legion of Boom—the nickname of Seattle’s secondary throughout most of the 2010s—are retired, and the current Seahawks backfield is hardly a shadow of the past.

Jameis Winston had five seasons to prove himself. In 2019 he has 23 interceptions, the most in the league, and 12 fumbles. His average yards per pass is a career-high 8.0, but his decision making can’t be trusted. It’s time for a new captain on offense.

The Titans are in the playoff hunt, largely because of Tannehill’s play. The former Dolphins QB is second in the NFL in completion percentage (73.4%) and has carried the Titans to a 6-1 record since he earned the starting job over Marcus Mariota in Week 7. Tannehill’s contract is up in 2019, but Tennessee should probably find a way to keep him around.

If you can’t score, you can’t win. That’s one of the many problems plaguing the 3-10 Redskins in 2019. Washington has averaged 14.5 points per contest, which is the worst number in the league. A reliable quarterback in the future may help the cause.


The NFL regular season is winding down, but there's still plenty of football action to wager on at BetAmerica!