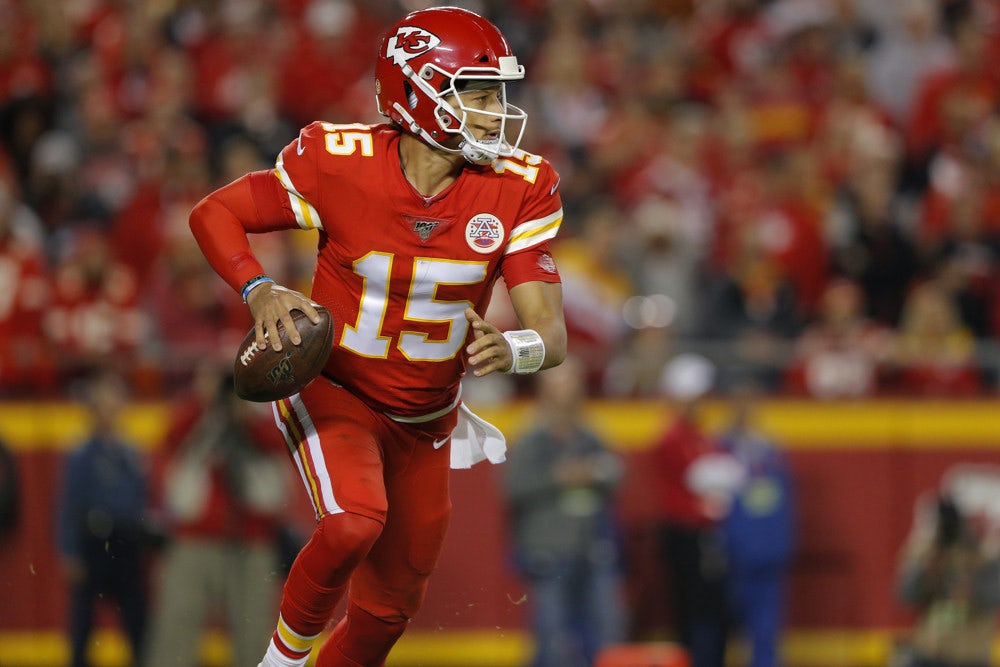 Kansas City Chiefs Quarterback Patrick Mahomes scrambles out of the pocket during a game against the Indianapolis Colts. (Photo by Jeffrey Brown/Icon Sportswire)

Before the start of Week 17, the Kansas City Chiefs were sitting as the No. 3 seed in the AFC and needed a lot to fall their way to get a first-round bye. Their odds to win the Super Bowl were +600, and they were the fifth choice to win it all.

Then the New England Patriots managed to lose at home to the Miami Dolphins, which vaulted the Chiefs into the No. 2 seed and a first-round bye. It also moved their odds to +375, which jumped the Patriots, San Francisco 49ers and New Orleans Saints.

Are they worth betting on with this new price?

The Chiefs' road to the Super Bowl

A Super Bowl appearance for Kansas City will likely feature tough matchups, barring any major upsets. The Chiefs are set to take on the Patriots first, if New England can defeat the Tennessee Titans this weekend. If the Titans win, the Chiefs will face the Houston Texans or Buffalo Bills. The next step would likely be the AFC Championship Game in Baltimore.

Kansas City went 3-3 against fellow playoff teams in the regular season, but the Chiefs were without quarterback Patrick Mahomes in two of those games (a loss to Green Bay and a win over Minnesota). The offense is certainly not a problem for KC. It ranks fifth in points scored and sixth in total yards. The Chiefs are entering postseason on a six-game win streak, following a loss to the Titans in Mahomes' return from injury. This includes a win at New England. Only the Ravens have a longer current win streak (12).
The most significant issue for the Chiefs have is their lack of running game and a poor rushing defense. They are 23rd in rushing offense and 26th in rushing defense. This combination can be a massive problem in playoff football. Teams like the Ravens, Titans and 49ers would completely own the time-of-possession battle and keep Mahomes off the field. I like this Chiefs team as a contender, but I am looking elsewhere at these odds.

Other teams to consider

The 49ers are the most complete team in the NFL. They finished second in points scored, fourth in total offense, eighth in points against and second in total defense. The emergence of Raheem Mostert and Deebo Samuel has led to this offense to an elite level. Only the Ravens come close to this balance of elite offense and defense.

The Saints' resiliency this season has been remarkable. The loss of quarterback Drew Brees for five games did not hinder this team one bit. The weapons are all over the place for Brees, with Alvin Kamara, Michael Thomas, Jared Cook, Taysom Hill and Latavius Murray. The greatest thing about this wager is, even if Brees goes down, you can trust Teddy Bridgewater to lead this team to victory.

This is an extreme longshot, but at these odds, they are worth a small wager. The Titans offense was rejuvenated by quarterback Ryan Tannehill, and I look forward to seeing what this team can do in the playoffs with a competent quarterback and standout running back Derrick Henry. The road is near impossible with the Patriots, Ravens and Chiefs all on the road in their way, but these odds are tempting.

There is value to be found if you can pounce on the right team before the playoffs begin. Check out NFL futures today at BetAmerica!