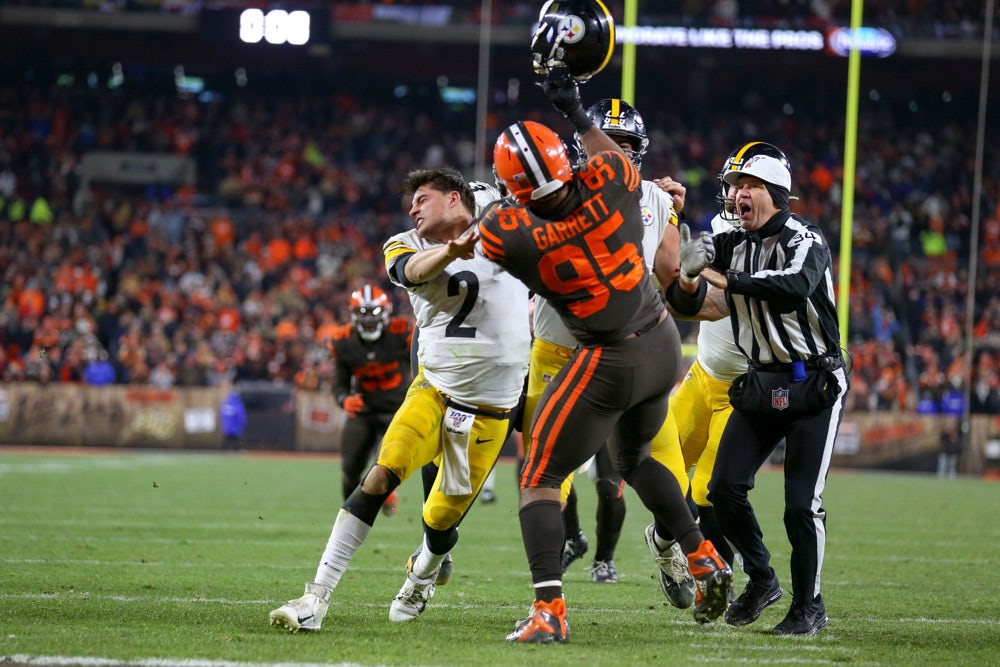 It’s the holiday season, and Santa Claus is making a list and checking it twice! We thought we would help him out, and let him know who has been naughty this season and who has gone above and beyond the call of duty. Here’s our breakdown of who deserves everything on their wish list and who should expect some coal in their stocking on Christmas morning.

It felt like cheating to have these as multiple different entries, so we are going to put them together for obvious reasons. On November 14 one of the more bizarre events in NFL history took place, when a contentious game between two bitter rivals erupted into a social media frenzy.

After he was sacked on consecutive snaps, Rudolph was hit a third time by Garrett after the quarterback threw a screen pass. Garrett slammed Rudolph to the ground, even though the quarterback no longer had the ball. Rudolph retaliated by trying to pull Garrett’s helmet off, and the defensive end responded by successfully ripping Rudolph’s helmet off.
As the Pittsburgh offensive line tried to pull Garrett away, Rudolph decided to get in Garrett’s face, which was followed by the helmet swing heard round the world, as the quarterback ate a blow to the dome from his own headgear. Pouncey then stood up for his quarterback and began throwing punches at Garrett’s head—why anyone would throw punches at someone with a helmet on is beyond me—as further chaos ensued.

When it was all over, Garrett was suspended “at a minimum for the rest of the season" and fined more than $45,000, Pouncey was suspended two games and fined a hefty amount, Rudolph was docked $50,000, Larry Ogunjobi (who hit Rudolph later in the melee) was suspended a game, multiple other players received fines and both franchises had to fork over $250,000 apiece. It was a black eye for both teams and the league, but at least we got this cool tree ornament out of it!

As someone who went to public school and whose mother struggled at times to pay for school lunch, I know the embarrassment that can come with that. That’s why the gesture made by Sherman is so significant to me and many others.

Just before Thanksgiving, Sherman made multiple payments of more than $27,000 to cover student lunch debt for a middle school in Santa Clara, California and for an entire school district in Tacoma, Washington. The defensive back was named the Week 11 Community MVP by the NFL. While it might be a small amount of money to him, it made a massive difference in the lives of many families, including some who have special-needs children, and shows how far a small gesture can go.

Did anybody really think the Patriots were suddenly going to stop trying to find every advantage they could? The story was big when it broke, but became even more damning when video was released this weekend by Fox Sports. The video, which was taken by a member of the Bengals’ security staff, shows footage of the Cincinnati sideline during a game against the Browns, which is in direct violation of the NFL rules.

When confronted, the videographers—who claimed they did it by mistake as part of a “Do Your Job” web series for the Patriots—offered to delete the footage and pretend it never happened. Their claim was that they were trying to get “field perspective” and that they did not know filming the sideline was against the rules.

The lengthy press release put out by the Patriots in the aftermath of the discovery was met with skepticism, and the video only makes it harder to believe what the franchise put out as an explanation. The video scout’s own reasoning doesn’t seem to add up, either, and the videographer who was caught taking the footage has been suspended by the Patriots.

NFL commissioner Roger Goodell is awaiting conclusions from the league's investigation before he takes action. This is not the first time, obviously, the Patriots have been caught using video to break the rules.

Guillain-Barré syndrome is a rare medical condition that causes rapid weakness of the muscles, and affects the immune and nervous system. It makes everyday tasks difficult and makes football tasks close to impossible at times.

The fact that Travis Frederick is still playing football is an amazing feat. He missed the entire 2018 NFL season and has returned to play in every Cowboys game this season. However, that is just part of his story. For the second time in three years, Frederick has been named the Cowboys’ nominee for the Walter Payton NFL Man Of The Year Award, given to the player who “truly embodies the spirit of Walter and his legacy of leaving the world better than he found it."

The offensive lineman has put in immense work in the Dallas-Fort Worth area. He has helped more than 70,000 children fighting hunger in the area through his Blocking Out Hunger Foundation. He also volunteers with Salvation Army and Make-A-Wish Foundation and continued that work even when he was out of the NFL last year. Few players deserve a special gift from Saint Nick more than this giant heart in the heart of Texas.

Josh Gordon once again has put his career in jeopardy in order to use banned substances, and this time it is likely permanent.

The wide receiver began the season with the Patriots, but they parted ways with him at the end of October. The Seahawks claimed him off waivers, and through four games with them, he registered seven catches for 139 yards.

His suspension this week, for violating NFL policies on performance-enhancing substances and substances of abuse, ended his season and possibly his career. At only 28 years old, the talented wide receiver has been suspended six times in his career. While everyone hopes he can finally get his life together, it’s very likely going to be a life without football, at least for the foreseeable future.

The Bears’ linebacker paid off around $80,000 worth of layaway accounts at a Walmart in his hometown of Fort Pierce, Florida. The payment was made for more than 300 families via the Khalil Mack Foundation, which helps inner-city families and under-privileged youth.

While many players with the money Mack has tend to flaunt their wealth, the linebacker is known for being a “regular guy,” who enjoys shopping at stores like Target, and has turned down multiple endorsement deals and an appearance in HBO’s “Ballers” series.

Earlier in the year he also sent more than 100 pairs of Nike cleats to a football team in his hometown. Mack is a very humble and generous player, and more than deserving of a spot on Santa’s “nice” list this year.


The end of the calendar year might be coming, but the NFL season is just heating up ahead of the playoffs!