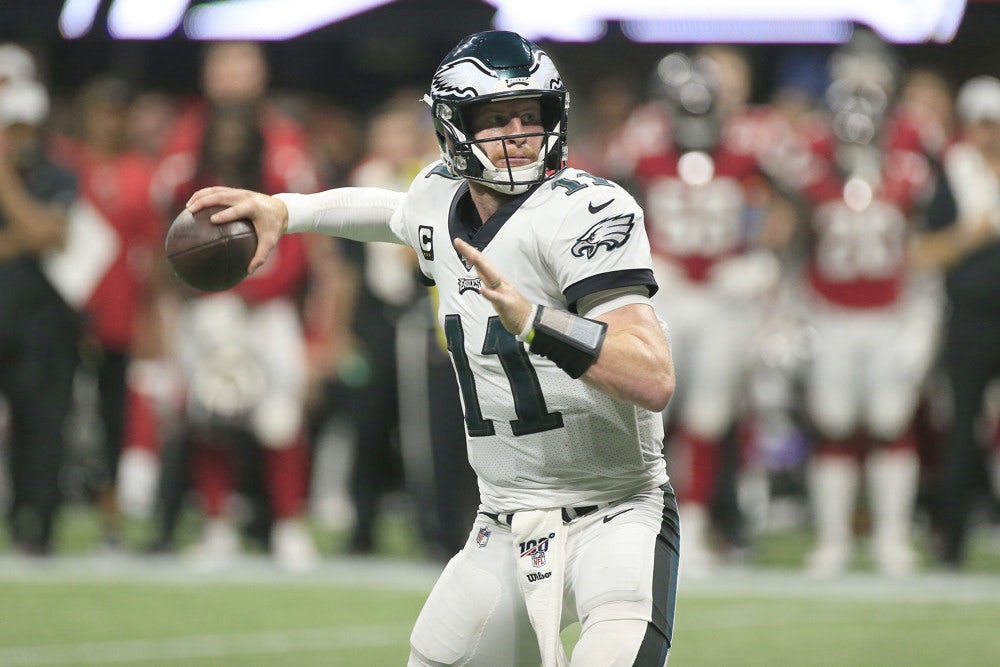 The late afternoon NFL games this weekend feature four teams in the midst of the playoff race looking to solidify their position heading into the final third of the season, including the top team in each conference. San Francisco looks to rebound as they host Arizona, while New England, fresh off their bye week, looks to get back to form as they travel to Philadelphia. In the final game, hapless Cincinnati will finally see some fans in the stands, but only because they will be on the road against the Oakland Raiders. It’s a busy afternoon, and we are here to help you win some money with a few free picks.

Following a tough overtime loss on Monday night to the Seahawks at home, the 49ers welcome conference foe Arizona before embarking on a very tough three-game stretch where they face the Packers at home before traveling to Baltimore and New Orleans. As such, this is an important game for San Francisco, as they look to keep their lead on Seattle in the division, with a gap of only half a game between them at the moment. The Cardinals, stuck at the bottom of the division, have little left to play for this season beyond pride and a draft pick position, as they had gotten back to a 3-3-1 record before embarking on their current three game losing streak.

Given how their first meeting ended, with a narrow 28-25 win just three weeks ago, the 49ers will not be overlooking the Cardinals. Arizona trailed by two touchdowns heading into the fourth quarter, but San Francisco had to hold on late to win. Kyler Murray played well in that game, and has kept them in some competitive losses as of late, while Jimmy Garoppolo has seen his recent form dip with injuries to Emmanuel Sanders and George Kittle, his favorite target.
In their loss to Seattle, Russell Wilson had a field day against the secondary, throwing for more than 358 yards. As such, the 49ers will likely look to control the clock with their run game, keep Arizona’s offense off the field, and take the ball out of their quarterback’s hands.

The Cardinals have been the underdogs in nearly every game this season, but they have covered the spread in five of their last six games. However, I believe the 49ers should be favored by closer to two touchdowns, if Kittle and Sanders are both healthy. Since their status will likely not be known until closer to kickoff, I’m going to assume one or both will miss out, and that should lead to a low-scoring affair. I’ll take the safe play and go with the under, which has hit in four of the last six meetings between these two teams.

Super Bowl 52 ended with the Philly Special, as the Eagles took down the Patriots in an epic ending. If that Patriots team had the secondary this one has, that play may well have gone for a touchdown in the other direction. New England’s defense was putting up record numbers in the first half of this season, but all of that came to a screeching halt in their last game. Lamar Jackson didn’t put up flashy numbers, but he was very methodical against the Patriots’ defense, and the Ravens relied on running the ball and keeping Tom Brady off the field, and forced a few turnovers of their own. Given that the Patriots faced only one team with a winning record over their first eight games, the Ravens may have exposed some flaws for the rest of the league.

The Eagles are a team that is equipped to take advantage of a few of those weaknesses. Philly ranks 11th in the league in rushing yardage, and have topped 100 yards in their last three outings. They will want to limit the Patriots’ time on the field, as their pass defense has been suspect this season against good offenses. They have also had a week to rest up, and will look to build on a two-game winning streak that has seen them allow just 27 points in that span. Their worst performances have been on the road this season, and they will want to stay tied with, or pass, the Cowboys atop the NFC East standings with a win.

All that said, I’ve learned never to bet against Bill Belichick after a bye week, especially when he wants revenge. The Patriots haven’t forgotten about their Super Bowl loss, and if they get the lead, I expect them to look to run up the score against a Philly defense that struggles against the pass.

The Bengals are terrible, and there’s no nicer way to put that. The offense has given the reins over to Ryan Finley, and he did nothing in his first start to give anybody confidence that he is the man to lead them to better days. Meanwhile, the defense has told the offense to hold their beer, as they’ve been even worse this season. At this point, it’s looking more and more likely that Cincinnati may end up 0-16 when things are done, having lost each of their last three games by double figures.

Now, they are yet again a double-digit underdog as they travel to face the Raiders, who are on a two-game winning streak and looking like they have righted the ship. Oakland has alternated two-game streaks with two-game skids, but look likely to break that trend this weekend. Their defense has improved over the last month, upping their interception numbers, and they will face a Bengals’ offense that ranks 29th in turnover differential. Meanwhile, their offense will look to capitalize against a Cincinnati defense that is worst in the league at stopping the run.

The Bengals have little to play for as they travel to the west coast, where the Raiders have covered the spread in six of their last seven outings. Meanwhile, Oakland will look to move to 6-4 and stay right in the thick of the race for the AFC West. Take the home team in a game that will likely be a blowout.

Wager on all NFL Week 11 action now before kickoff!