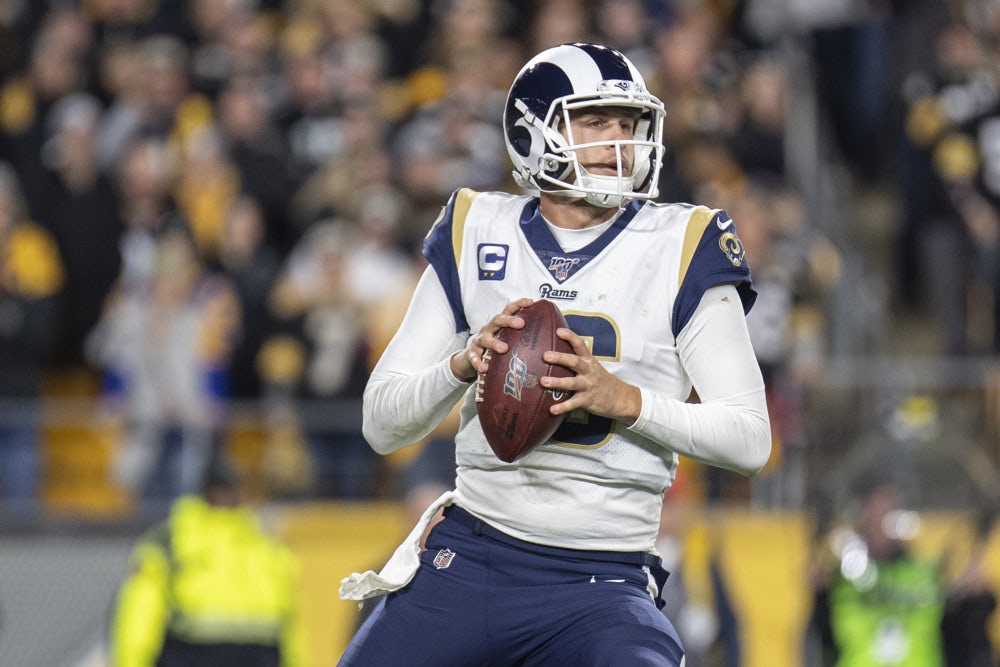 The final weekend of the NFL regular season will be quite an intriguing one. Even though all but a few playoff spots are clinched, there is still a ton of movement possible for seeding. The big matchup of the day is the final one, as the 49ers visit Seattle in a game that will decide the winner of the NFC West. Oakland will need to win and get a ton of help to make it into the playoffs as they travel to Denver, while the Rams will finish out their season with a whimper against the Cardinals after blowing their chance at sneaking in last weekend. Join us as we break down three of the best games of the final weekend!

It has been a frustrating season for Jon Gruden, as he has watched his team lose the division lead with a four-game losing streak, capped by blowing a 16-3 lead at home to the Jaguars in their final home game two weeks ago. Despite all that, the Raiders needed nine things to happen last weekend to keep any hopes of making the playoffs alive. You’d be very rich if you had bet on that parlay happening, as Oakland come into the final weekend with a slim chance. They need losses by Tennessee and Pittsburgh, and a win by the Colts, in order to sneak in. They also, of course, have to take care of business in the Mile High City against a Denver team that has looked much improved since Drew Lock took over the quarterback job.
The Broncos started the year 0-4, but a coaching change and the emergence of Lock over the past month have given them hope moving forward. They have scored at least 23 points in three of their last four, with the sole loss being on the road at the Chiefs. The secondary has been outstanding as well, giving up only 180 yards passing at home this season, and they will be facing a very banged-up Oakland offense that will likely be without starting RB Josh Jacobs, which is bad news for Derek Carr.

With neither team eligible for the playoffs, this is a game with really good value for the betting public. The Rams are the favorite at home, but after being humiliated last week by the Ravens in their own building, they are looking more and more like they will bench multiple key players. This includes Jalen Ramsey (who has officially been ruled out) and Eric Weddle, two major parts of their secondary, as well as the key cog of their offensive line in Andrew Whitworth. With little to play for, the Rams might just decide to throw different guys out there and see what they have moving forward.

The problem for the Cardinals is that Kyler Murray is a game-time decision as he deals with a hamstring issue. If he is out, Brett Hundley will get the start, which means the Cardinals will likely run the ball a fair amount with Kenyan Drake, who has almost 300 yards and six scores in his last two games. If Murray does start, the Cardinals could very well go on the road and win this contest, against a team that has beaten them five straight times, including a 34-7 beating just a month ago.

The total has gone under in seven of the Rams’ last 10 contests, and Arizona has covered in six of their last eight road games, with one push. They also have covered the spread four of their last five visits to Los Angeles. If Murray can go, take the points in a game Arizona may very well win. If he’s out, then look for both offenses to be a bit stagnant in a low-scoring game.

The final game of the weekend has the biggest implications of any. Depending on results ahead of their game, either team could win this game and be the top seed in the conference. A loss for the Seahawks, however, could see them as the fifth seed and playing on the road on Wild-Card weekend. The stakes could not be higher, which is why the banged-up Seahawks reached into their past and signed Marshawn Lynch this week to a contract through the playoffs.

Beast Mode will be as fresh as a player can be, but his age and lack of practice time will likely be an issue. That said, he’s motivated to take care of “unfinished business”, as he put it. It might not be enough to overcome the absence of Duane Brown at left tackle, but the Seahawks will badly want to run the ball and avoid dealing with the top-ranked pass defense of the 49ers. If they become one-dimensional, it could become a repeat of the first matchup that saw Russell Wilson get sacked five times. Given that Seattle’s offense looked pretty bad last week against Arizona, where they converted just once in 12 third-down attempts, it could be a long day for the home team.

The 49ers will need to take better care of the football than they did in the first matchup between these two, and will look to take advantage of a banged-up Seattle defense this weekend. They have won six of their seven road games this season, with only the Ravens taking them down, so the environment should not be too much of a concern, but Jimmy Garoppolo cannot have a repeat performance of the three-turnover outing he had against the Seahawks earlier this season. Look for George Kittle to get targeted often against a linebacker corps that may be without two starters this weekend.

These two teams battled it out in their first meeting, and the 49ers have seen the over hit in seven of their last nine contests. The total has also gone over in six of the last eight matchups between these two, and in seven of their last eight matchups with any team from the NFC West. The total has come down as the week has gone along, so take advantage and enjoy what should be a close game to the very end.

Wager on all NFL Week 17 action now at BetAmerica!