Kansas City looks to keep their high-powered offense rolling in a NFL Week 4 Monday Night betting battle against the AFC West rival Denver Broncos. Can the Chiefs maintain their winning streak, or will the Broncos end it? This line has been moving all over the place, so we have to figure out what exactly is going on here.

Chiefs Offense vs Broncos Defense Andy Reid has always had a capable offense ever since migrating to Kansas City, but this year's might be the best he's ever had. The Chiefs average 39.3 points per game. Quarterback Patrick Mahomes has thrown a record 13 TD passes and no interceptions in only 3 games. Mahomes’ quarterback rating is 137.4, but, but that's not even the scariest part for defensive coordinators. Kansas City doesn’t just rely on the passing attack. Running back Kareem Hunt can break it for a TD on any carry while the Chiefs average over 103 rushing yards per ranking 15th in the NFL. Denver’s got a decent defense, but it won’t come close to stopping the best offense in the NFL in Week 4 Monday Night betting.

Broncos Offense vs Chiefs Defense Although quarterback Case Keenum is a huge step up from the quarterbacks Denver sent to the field last season, he hasn’t been nearly as effective in Bronco orange as he was in Viking purple. Last season with Minnesota, Keenum completed 68.7% of his passes on his way to a 98.3 quarterback rating. Those numbers have dropped significantly over the first three games of the 2018 campaign with Keenum completing just 61.1% of his passes with a 71.6 rating.

The Broncos rushing attack has done all it could to help Keenum. Denver averages 144.7 rushing yards per, ranking it 3rd in the NFL.

Keenum’s definitely underperforming but there’s a real chance he turns it around against the Chiefs’ defense. Kansas City’s secondary allows 362.7 yards per game, ranking 31st in the league against the pass. Overall, the Chiefs allow 474 total yards per game. That's the most by any team in the NFL.

Kansas City’s defense is so bad that even a struggling quarterback like Case Keenum should have success. Denver’s offense has the edge over the Chiefs’ defense. 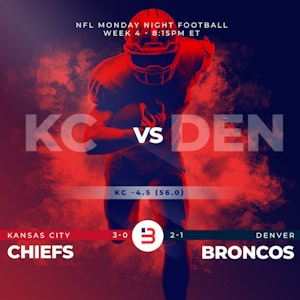 Chiefs at Broncos Betting Trends Week 4 Monday Night Betting Analysis and ATS Prediction The opening line for Week 4 Monday Night betting went from KC -3.5 to KC -5. It’s since normalized to KC -4.0. Are the Chiefs that much better than the Denver Broncos? On paper, yes, but in reality this game sets up for a possible Denver win on the moneyline. Unlike the past few seasons, the Broncos can rush the football as well as any team in the NFL. Denver uses two running backs, Phillip Lindsey and Royce Freeman, to keep defenses guessing.

If the Broncos can control the clock with their rushing game, they can keep Mahomes from tearing up their secondary. Denver's offense has been just below league average throughout the season, but they have an opportunity here against a very leaky defense. If they're ever going to have a breakout game, it's against the worst, statistical group of stoppers in the NFL. Denver should at least keep it close.