Retirement a real possibility for Tom Brady and Philip Rivers 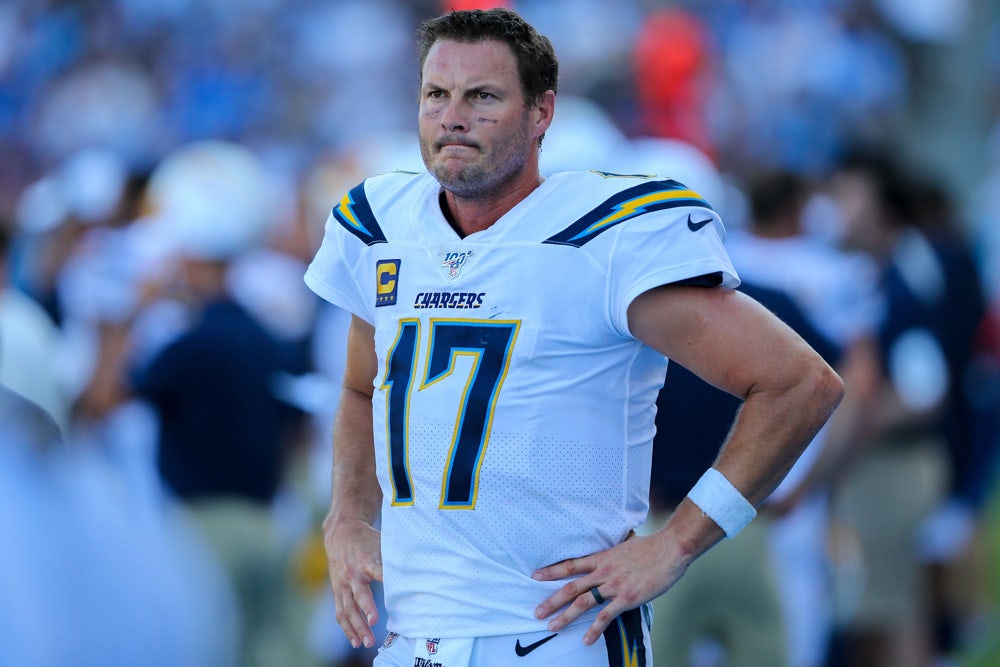 Los Angeles Chargers quarterback Philip Rivers could be nearing the end of his career. (Photo by Jordon Kelly/Icon Sportswire)

Week 11 commenced with an epic meltdown on Thursday Night Football, and it has only gotten more interesting from there. From Colin Kaepernick's comeback attempt to the Minnesota Vikings' 20-point rebound, here are the five main takeaways from Week 11 of the NFL season.

It was a disappointing weekend for the old guys under center. In the Patriots’ 17-10 victory over the Philadelphia Eagles, Tom Brady once again needed his defense to rescue the team, as the 42-year-old signal caller and his offense seemed lost on the field.

Brady went 26-for-47 and failed to record a touchdown through the air. The lone Patriots touchdown came on a pass from receiver Julian Edelman to Phillip Dorsett in the third quarter. It was the first time in Brady’s career that another teammate led the Patriots in touchdown passes when he played the entire game.
The Patriots offense continues to stumble against stiffer competition, and the schedule won’t let up anytime soon, with the Cowboys, Texans and Chiefs looming on the calendar.

Speaking of Kansas City, the team heralded for its offense and often condemned for its defense intercepted Philip Rivers four times Monday night. The 37-year-old Chargers quarterback completed 28 of his 52 passes and tossed just one touchdown in Los Angeles’ 24-17 loss in Mexico City.

Rivers has tallied 15 TDs to 14 interceptions this season, which doesn’t bode well for his future with the Chargers.

Both Rivers’ and Brady’s contracts are up at the end of the season. Could both of them decide it’s time to hang it up?

One quarterback still searching for a roster spot this season and beyond is Colin Kaepernick. On Saturday afternoon the NFL arranged a suspicious workout in Atlanta that had many people crying out conspiracy and further collusion to prevent Kaepernick from playing in the NFL.

In light of the strange circumstances surrounding the workout, Kaepernick cancelled the NFL’s event at the last minute and invited the media and any NFL executives who would like to attend to drive 60 miles to observe Kaepernick in action at a high school.

Kaepernick later addressed the media and called out the NFL for what he believed to be dubious motives. The workout couldn’t have gone worse for the NFL, but it also didn’t do much to help Kaepernick’s prospects, as he only proved his participation in the league would come with a distracting sideshow.

3. The NFL got the Myles Garrett suspension right

The Kaepernick situation was bad enough, but before Saturday’s debacle, the NFL had another issue on its hands, when Myles Garrett unleashed an attack on Mason Rudolph in the closing seconds of the Steelers-Browns game.

Cleveland only needed to let the clock run out and exit the field with a 21-7 win at home, but before the Browns could bask in their triumph, Garrett and Rudolph got into a fight, and Garrett went so far as to knock Rudolph in the head with the quarterback's own helmet. Other players got involved and penalties ensued. Then came the suspensions.

Garrett’s season is over, as the NFL suspended him indefinitely without pay. It’s unfortunate for the young star, who sat just 2 1/2 sacks behind the league leader, Chandler Jones, and could have easily overtaken him by season’s end.

Even in the Browns’ first dominant win in almost two months, Cleveland managed to come out feeling like the loser.

4. Vikings sail under the radar as a Super Bowl contender

Minnesota hardly looked like a viable playoff team Sunday, as it trailed the 3-7 Broncos, 20-0, at halftime—at home, no less.

Then Kirk Cousins snapped the offense into shape, and with six minutes remaining in the fourth quarter, the Vikes held the lead. In the second half Cousins completed three touchdown passes, plus Dalvin Cook ran three yards to the end zone for another score.

Cook also topped the 1,000-yard rushing mark for the first time in his career and is second in the NFL in rushing yards this season—42 yards behind Christian McCaffrey’s league-leading 1,059 yards.

Now 8-3, Minnesota is second in the NFC North and the projected sixth seed in the NFC. The Vikings rank third in rushing offense and sixth in rushing defense, and demonstrated Sunday they can fight back in the face of adversity. Keep an eye on Minnesota going forward, because this team should not be overlooked in the postseason.

5. The Falcons are the hottest team in the NFC South

Finally, the biggest surprise of November has been an unexpected predator of the NFC South. With a 1-7 record at the time, the Atlanta Falcons marched into the Superdome in Week 10 and handed the New Orleans Saints an embarrassing 26-9 loss, as the Falcons sacked Drew Brees six times and held him out of the end zone.

Many called Atlanta’s win over its historic rival a fluke, but the Falcons turned around and did it again Sunday against another NFC South foe, Carolina. Despite a hot start, quarterback Kyle Allen experienced his worst outing of the season, as the Falcons intercepted him four times and recorded five sacks.

In its second straight road victory, Atlanta left Carolina with a 29-3 rout of the Panthers and now owns a 3-7 record. Chances are the Falcons won’t make the playoffs, but if they can maintain momentum and pull off victories over Tampa Bay twice, and New Orleans and Carolina once more, it’s not out of the question.

If nothing else, it’s been fun to watch Dan Quinn hold on to dear life for his coaching job and inspire huge defensive performances from the Falcons in the second half of the season.


Wager on all Week 12 NFL action now at BetAmerica!