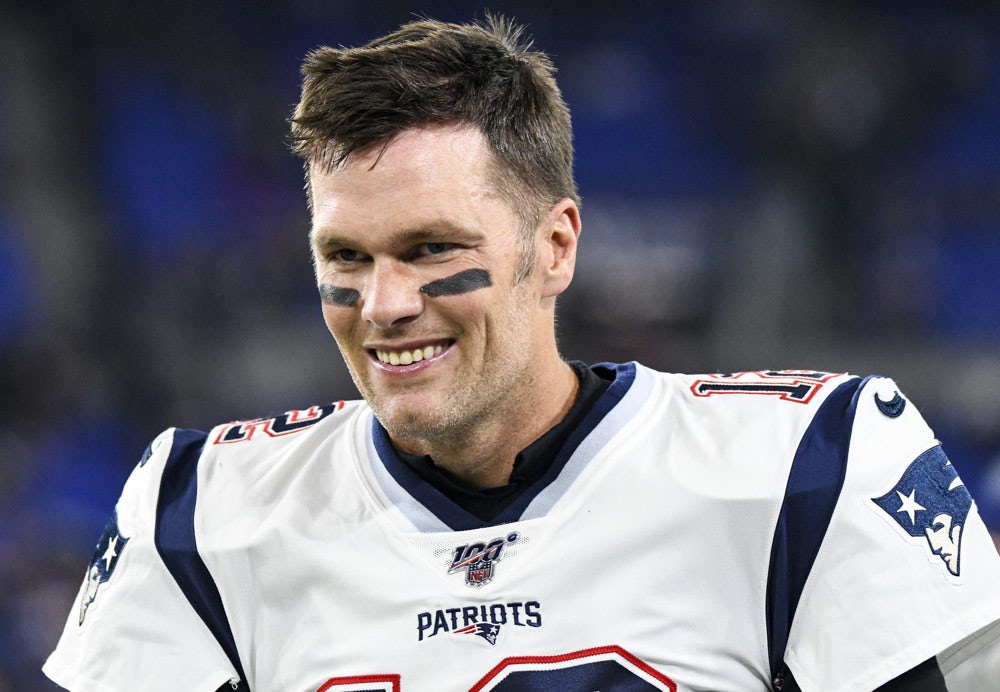 Tom Brady has had plenty to smile about during his career. (Photo by Mark Goldman/Icon Sportswire)

The playoffs are where legends are born, and there are some NFL playoff records that will likely never be matched. There are single-game performances that blow the mind and remarkable cumulative records. Here the most untouchable records in NFL playoff history.

We all know 28-3, and the significance of that score in NFL history. The comeback by the Patriots over the Falcons in Super Bowl LI was mind-blowing and instantly became legend. It also was a full touchdown less than the largest comeback in NFL history.

That record belongs to the 1992 Buffalo Bills, who rallied from a 35-3 deficit in the third quarter, forced overtime and won, 41-38, to stun the sporting world. “The Comeback” or “The Choke”—depending on which side you were on—was so improbable because star running back Thurman Thomas left the game with a hip injury on the drive that pushed the deficit to 35-3, after an interception was returned for a touchdown by the Oilers.

The comeback was aided by a pair of fourth-down conversions on the Bills' first two touchdown drives and an onside-kick between them. They also forced an interception and a forced fumble during the rally, and it was a 17-yard touchdown pass that put the Bills ahead for the first time. However, Warren Moon, who had an outstanding game in his own right, drove the Oilers down the field to set up an equalizing field goal that sent the game to overtime. The Bills intercepted Moon again in overtime, and Doug Christie nailed a 32-yard field goal to win the game.

The Bills' play in the first half was so ugly that many fans left the game and tried to come back, which forced the stadium to re-open the gates to stop fans from climbing fences. Buffalo quarterback Jim Kelly, who also missed the game with an injury, joked that “150,000 people went to the Buffalo Bills game” after it was over. Steve Tasker once joked that he met “1.2 million people” who claim they attended the game. The Bills won their next two games but fell 52-17 in the Super Bowl to the Dallas Cowboys.

In 2005 the Jacksonville Jaguars went 12-4 in the regular season to earn a Wild Card berth. Their reward was a road game against the defending champion New England Patriots. It was not a fun reward for quarterback Byron Leftwich, who was sacked six times in a 28-3 loss.

Most of those sacks were registered by Willie McGinest. The previous record of 3.5 sacks was held by Rich Milot and Richard Dent, and they are the only three players to record more than three sacks in a playoff game.

Not only did McGinest set the single-game record, but his final sack set the NFL record for sacks in the postseason (16). With the rules changing in the NFL to protect quarterbacks, it makes it just that much more unlikely that anybody will break McGinest’s record.

Tom Brady has set so many records that it would take another article to break them all down. With that said, I have chosen a few specific records that stand out during Brady's long career.

Playoff starts for any player: 41

Brady has started 12 more games than the second player on the list, Jerry Rice. Barring an expansion of the NFL playoff structure, this record may never be broken. A player would need to average three starts per postseason, for 12 straight years, to eclipse this mark.

Playoff wins for a quarterback: 30

Brady has 14 more playoff wins than Joe Montana. A quarterback would need to win two playoff games in 15 seasons, or three each season for 10 years. It’s not going to happen.

He has nearly twice as many passing yards than Montana and Brett Favre. Drew Brees and Aaron Rodgers, combined, have nearly 2,000 fewer passing yards in the postseason. Peyton Manning’s 7,339 yards are still more than 4,000 yards shy of Brady’s mark over his 20-year career.

Montana, who won four Super Bowls, threw 45 playoff touchdown passes. He is second on this list. Aaron Rodgers is second among active players (36). If he doubled his current total, he would still be one touchdown behind Brady.


Will records be set this weekend in the NFL? Check out all the playoff matchups at BetAmerica!