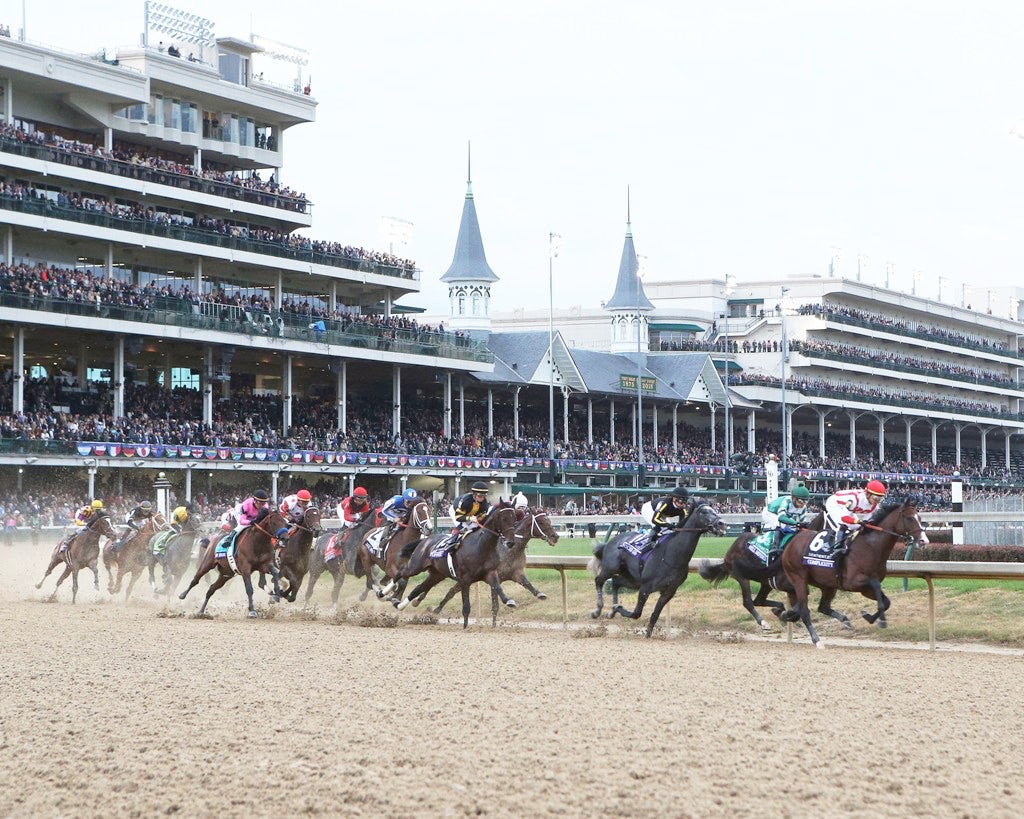 The field rounds the first turn of the 2018 Breeders' Cup Juvenile (gr. I) at Churchill Downs - Coady Photography

With the running of the Zen-Nippon Nisai Yushun in Japan on December 19th, the final Kentucky Derby prep race of 2018 entered the history books, giving us an opportunity to look back on the season before the calendar turns over and we continue headlong toward the 2019 Derby.

During the course of the primary Road to the Kentucky Derby, which kicked off with nine races between September and December, 32 different horses earned qualification points for the Derby. Leading the way with 30 points (practically enough to qualify already) is the Breeders’ Cup Juvenile (gr. I) winner Game Winner, while the Juvenile runner-up and Breeders’ Futurity (gr. I) victor Knicks Go sits in second place with 18 points.

Since I’ve been fully focused on the Derby trail ever since the Breeders’ Cup wrapped up, here are a few of my impressions on what we’ve seen so far, and what we might expect to see in 2019….

These 2yos Are Fast (But Not Too Fast)

While we haven’t seen any two-year-olds run off the charts in terms of speed figures—no triple-digit Beyers, for example—across the board, this seems like a pretty fast crop of two-year-olds without any clear standouts.

According to Daily Racing Form data, no less than 17 two-year-old males have cracked the 91 Beyer mark, with the best mark coming from the unbeaten Maximus Mischief, who posted a 98 while winning an allowance race. That’s a solid set of numbers from a wide variety of horses, and four of them (Maximus Mischief, Game Winner, Improbable, and Network Effect) have already cracked the 91 plateau twice. I’m thinking that the future looks bright for this crop of two-year-olds.

With two Triple Crown winners (American Pharoah and Justify) since 2015, trainer Bob Baffert has reemerged as a dominant force in the classics following his resounding success in the late 1990s and early 2000s. In what is surely an example of the “American Pharoah effect,” Baffert is training for more and more high-profile clients these days, and his current crop of Derby contenders might well be the strongest he’s ever had. Baffert has won races with no less than thirteen two-year-old males this year, including the three-time Grade 1 winner and probable champion Game Winner, the early favorite for the Kentucky Derby.

But Baffert’s barn also includes the unbeaten Los Alamitos Futurity (gr. I) winner Improbable and the promising maiden winners Coliseum and Roadster. One thing seems certain—even if Baffert doesn’t win another Triple Crown in 2019, he’ll surely be prominent along the Road to the Kentucky Derby.

Watch Out for Steve Asmussen Too

Already Godolphin’s Royal Marine has risen to prominence by scoring a narrow victory in the Prix Jean-Luc Lagardere (Fr-I) at Longchamp, which put him atop the European leaderboard with 10 qualification points. Trained by Saeed bin Suroor, the son of 2008 Breeders’ Cup Classic winner Raven’s Pass has the Derby as a long-range goal, though it sounds like he’s more likely to prep on dirt in Dubai this winter rather than continue down the European route to the Derby.

In Japan, the California-bred filly Make Happy was the first to strike by scoring a decisive win in the Cattleya Sho at Tokyo, earning 10 qualification points. But when she faced tougher competition in the 1,600-meter Zen-Nippon Nisai Yushun at Kawasaki—considered the top race for two-year-old dirt horses in Japan—she was under pressure throughout and struggled home fourth.

In the meantime, it was Nova Lenda who made a nice impression with a pace-tracking victory. Coming off a pair of easy wins going 1,800 meters, Nova Lenda broke smartly from post twelve, showed speed to press the leader for much of the race, was briefly headed by his rallying stablemate Gal Vihara at the top of the stretch, and then battled back to reclaim the lead and hold off a furious late charge from three-time winner Derma Louvre to win by a head.

Since the top four finishers had all won multiple races beforehand, it seems evident that the Zen-Nippon Nisai Yushun field was considerably stronger than that of the Cattleya Sho. Nova Lenda currently sits atop the Japan leaderboard with 20 qualification points, and while he might be lacking the flashy brilliance of last year’s Zen-Nippon Nisai Yushun winner Le Vent Se Leve—who has since become a Group 1 winner—Nova Lenda certainly warrants watching as the Japan Road to the Kentucky Derby continues.

The main Road to the Kentucky Derby resumes with the Jerome Stakes (gr. III) on January 1st at Aqueduct.
Racing