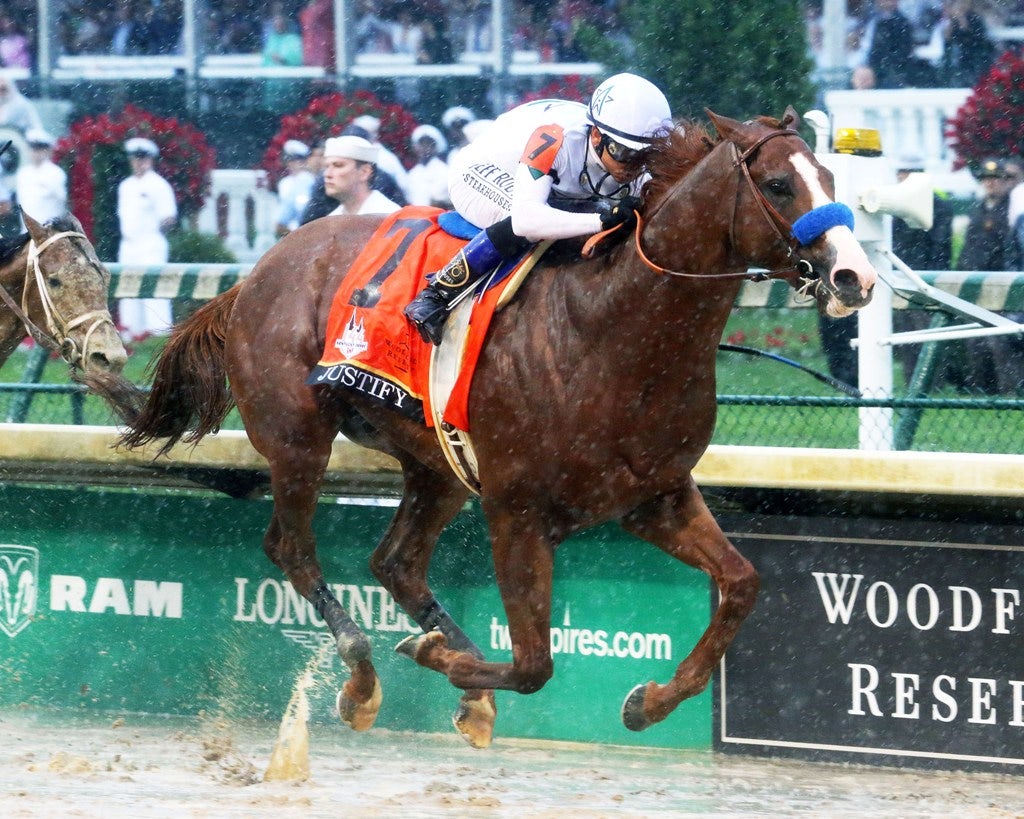 The results of the 144th Kentucky Derby are in the history books, and it was a day for records to broken.

Record rainfall. Record wagering. The demise of the fabled “Apollo Curse.” Throw in the fact that favored Justify delivered with a huge victory, and you have an unforgettable Kentucky Derby.

But the Preakness and Belmont Stakes are still to come, so Triple Crown season is far from over. With an eye on the next two legs of the series, let’s take a look at what happened to each horse in the Derby field….

Justify (1st): The Derby winner had the speed and talent to work out a great trip, pressing fast fractions of :22.24, :45.77, and 1:11.01 before taking command and turning back a bid from Good Magic to win by 2 ½ lengths. The fact that he survived such a fast pace and was pulling away at the finish is impressive, and he should be tough to beat in the Preakness.

Good Magic (2nd): Had a clean trip settling just off the lead and making a bid for supremacy in the homestretch, but he couldn’t keep up with the winner in the final furlong and had to settle for second.

Audible (3rd): From a pace perspective, he arguably got a better setup than Justify and Good Magic and he also benefited from saving ground through much of the race. He did have to steady briefly on the far turn, which may have cost him second place, but for a horse attempting to rally from the back half of the field, Audible received a pretty clean trip.

Instilled Regard (4th): Was bumped by Magnum Moon at the break and wound up in seventeenth place for the first six furlongs, then threaded his way through the field on the far turn to rally and finish a clear fourth.

My Boy Jack (5th): Dropped to the back of the pack is usual and had to steady behind horses while attempting to rally at the three-eighths pole, but subsequently shifted to the outside and finished strongly to secure the final piece of the purse.

Bravazo (6th): Was involved in an early bumping incident that compromised the chances of Mendelssohn (see below) and subsequently raced wide throughout, but put in a mild rally from mid-pack to finish sixth in very respectable performance.

Hofburg (7th): Saved ground early on but encountered a dreadful amount of traffic on the far turn, having to check repeatedly while constantly shifting lanes and bidding for holes that kept closing. When finally steered to the far outside, he finished strongly in a performance that was much better than it appeared at first glance.

Lone Sailor (8th): Was sent straight to the rail by jockey James Graham and stayed there throughout, riding the best part of the track to get as close as sixth in the homestretch before settling in eighth place.

Vino Rosso (9th): Had a wide but pretty much trouble-free trip, settling in eighteenth place before rallying mildly to wind up in ninth place, beaten 10 ½ lengths. I think this is an effort he can build on in the Belmont Stakes (gr. I) next month.

Solomini (10th): Didn’t seem to care for the muddy kickback early in the race and dropped back to last while carrying his head high. He remained at the back of the pack for much of the race, then threaded his way through along the inside to pass half the field and was closest at the finish line.

Firenze Fire (11th): Got off to a good start from post one to secure good early position and tried his best to make a move around the far turn before flattening out and fading in the homestretch.

Bolt d’Oro (12th): Raced very close to the fast pace and made a bid to challenge around the far turn, but had nothing left turning for home and dropped back through the field. Perhaps he didn’t care for the mud, or perhaps his two hard prep races for the Derby took a toll on him; in any, he’s going to get some time off before returning in the summer.

Flameaway (13th): After breaking just a step slowly, Flameaway found himself off the pace and behind horses, not an ideal position for a speedy colt. Nevertheless, he fought to stay in the mix through the mile marker before tiring in the final quarter-mile.

Enticed (14th): Was jostled around in traffic during the first three furlongs and never seemed to settle into a rhythm after that. He was jostled again on the far turn and failed to make a bid after shifting to the far outside, but that’s not surprising given the trip he endured. His trouble was subtle but significant.

Promises Fulfilled (15th): Went straight to the lead as expected and carved out fast fractions of :22.24, 45.77, and 1:11.01 before fading. Shorter races against easier company could see him rebound in the future.

Free Drop Billy (16th): Settled close to the pace for much of the race while saving ground, but ran out of steam on the far turn and steadily retreated to last place before re-passing a few colts that were eased near the finish.

Noble Indy (17th): Settled farther off the lead than usual in seventh place while racing wide, then had nothing left entering the far turn and dropped back.

Combatant (18th): Endured a very wide trip while starting from post twenty and understandably ran out of gas. Cutting back in distance might be beneficial.

Magnum Moon (19th): Made a sharp left-hand turn out of the starting gate and crashed into Mendelssohn, causing both to wind up much farther off the pace than usual. From there, Magnum Moon never got comfortable and was essentially eased in the homestretch.

Mendelssohn (20th): Was bumped hard at the start by Magnum Moon and subsequently wound up racing off the pace and behind horses, far from an ideal trip for a horse with no experience having mud kicked back in his face. He was eased in a performance that should be forgiven.
Racing