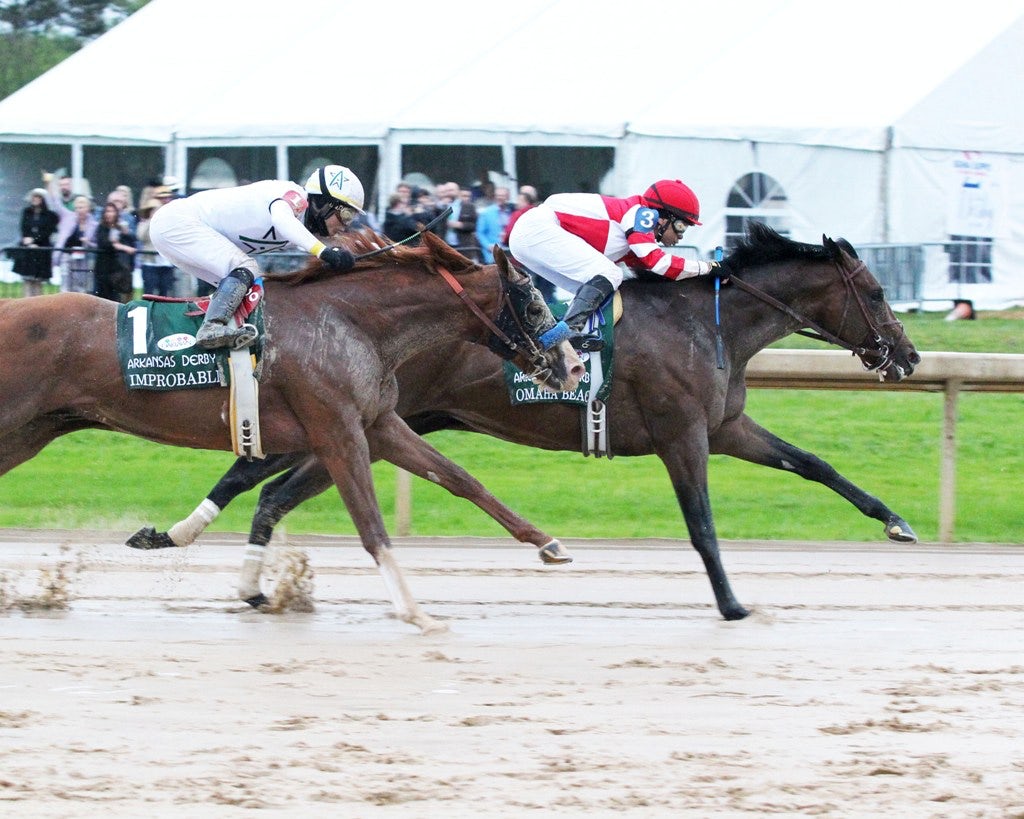 Omaha Beach turns back Improbable in the Arkansas Derby (gr. I) - Coady Photography

The expected field might be small, but the 2019 Breeders’ Cup Dirt Mile (G1) at Santa Anita is still shaping up to be a memorable race.

Based on pre-entries, as few as nine horses might start in the $1 million race, which will conducted as a two-turn mile. But quality runs deep, and one standout star might be worth singling in multi-race wagers.

Final entries and post positions for the Breeders’ Cup Dirt Mile will be announced on October 28. In the meantime, let’s take a horse-by-horse look at the pre-entries.

Son of Elusive Quality has decent dirt breeding, but his lone start over the surface yielded a distant third-place finish at 71-1 in the 1 1/8-mile Korea Cup in South Korea against much easier competition than he’ll face in the Breeders’ Cup. Against handicap company in Europe, Ambassadorial has been only fair.

South Korean sensation boasts a 7-for-8 record and beat a handful of U.S. sprinters (Heartwood, Holy Legal and Fast Pass) when he won the six-furlong Keeneland Korea Sprint. But his victory produced a Racing Post Rating of just 108, substantially lower than the career-best figures posted by Omaha Beach (122), Coal Front (117) and even Mr. Money (112). The Dirt Mile will mark a big step up in class and distance.

A once-beaten five-time grade 2 winner, Catalina Cruiser is cross-entered in the Breeders’ Cup Sprint (G1) and is expected to run there instead.

The Godolphin Mile (G2) winner bounced back from a couple mid-year defeats with a gutsy victory in the Parx Dirt Mile. The Todd Pletcher-trainee is a graded stakes winner around two turns and has the tactical speed to set or stalk the pace, an asset over the often speed-favoring track at Santa Anita. The cross-country ship shouldn’t be an issue, since he traveled halfway around the world to win in Dubai. He's a definite danger on his best day.

The winner of the Smile Sprint Stakes (G3) and twice placed at the grade 1 level, Diamond Oops is cross-entered in the Sprint, which is listed as his first preference.

Beaten a nose in the Vosburgh Stakes (G1) at six furlongs, Firenze Fire is cross-entered the Dirt Mile and the Sprint, and has first preference in the latter.

He hasn’t won since December 2017 and has been soundly beaten twice before in the Breeders’ Cup Dirt Mile, but he fired off a big effort when beaten just a head by Catalina Cruiser in the seven-furlong Pat O’Brien Stakes (G2) on August 24. He hasn’t run since, but the 2 1/2-month layoff might keep him fresh for the Breeders’ Cup. His best Beyer speed figures make him competitive here.

The late-running winner of the seven-furlong Woody Stephens Stakes (G1), this talented sophomore is cross-entered in the Sprint and has first preference there.

This grade 1 winner has shown flashes of serious talent for trainer Bob Baffert, but can be his own worst enemy at times, with poor starts from the gate. An unencumbered trip from an outside draw will be critical for Improbable to show his best. It’s encouraging to note Improbable’s career-best Beyer (104) was achieved in a two-turn mile.

The son of two-time Breeders’ Cup Dirt Mile winner Goldencents dominated four straight grade 3 stakes during the spring and summer, with future grade 1 winners Hog Creek Hustle and Math Wizard among his beaten rivals. He subsequently finished a neck behind Math Wizard in the 1 1/8-mile Pennsylvania Derby (G1), but was rank setting the pace that day and could improve while returning to stalking tactics. The cutback to a mile might also be beneficial.

Arkansas Derby (G1) winner is proven at a high level around two turns and recently returned from a six-month layoff to win the Santa Anita Sprint Championship (G1). Considering he cut back to six furlongs after a series of training setbacks, he really shouldn’t have won, but nevertheless he rallied tenaciously to beat the talented Shancelot with a career-best 103 Beyer. He’s continued to train forwardly for Richard Mandella (winner of nine Breeders’ Cup events at Santa Anita) and looms as one of the most likely winners of the 2019 Breeders’ Cup.

The battle-tested 4-year-old is a two-time stakes winner on turf, where he most recently claimed the $750,000 Tourist Mile at Kentucky Downs with a big finish. But this son of City Zip is 1-for-11 on dirt and has yet to crack the triple-digit Beyer barrier. The distance is ideal, but the surface and class level are question marks.

He owns the field’s best Beyer speed figure, when he earned a 110 to win the M.P. Vallezzi Appreciation Mile Stakes at Parx Racing by 6 3/4 lengths. But this performance essentially came out of nowhere (Spun to Run had finished fifth in the Pennsylvania Derby one start prior), and it’s fair to question the caliber of competition he defeated. I’m skeptical whether he can repeat his big speed figure against tougher company.

A group 3-winning miler in Europe, Trais Fluors has never raced on dirt and is cross-entered in the Breeders’ Cup Mile (G1), his first preference.

Last year’s Sprint runner-up has been cross-entered in the Dirt Mile to keep his options open, but has first preference in the Sprint.
Racing