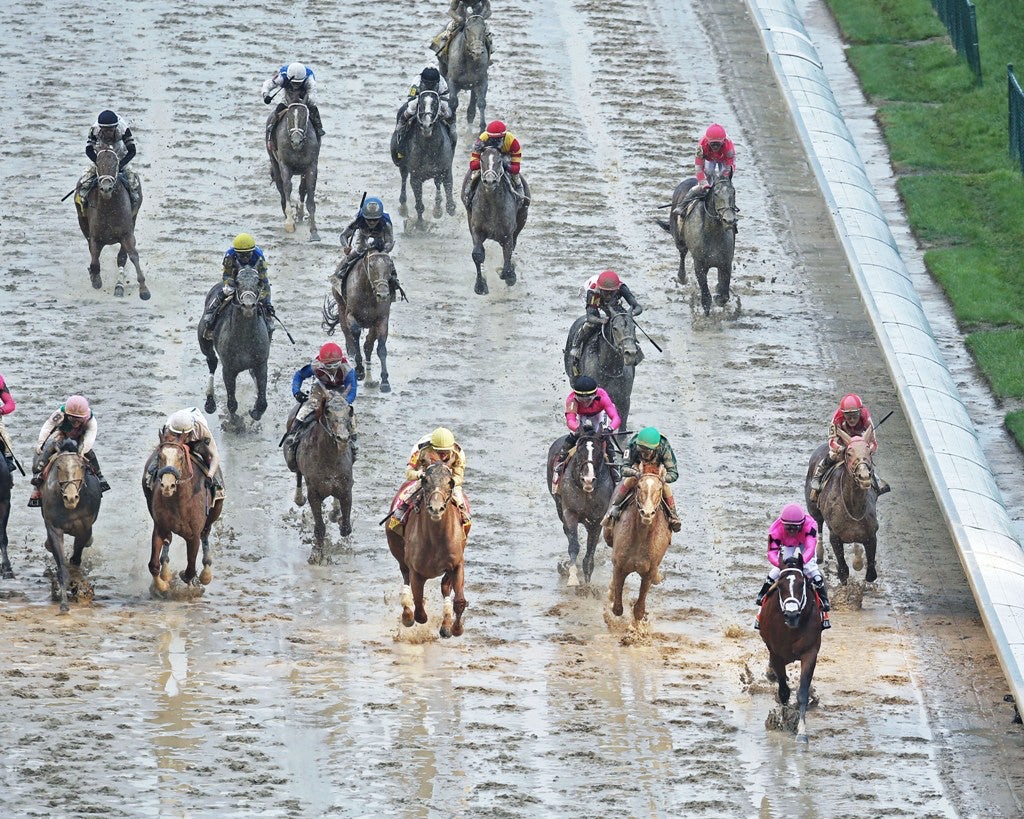 The finish of the 2019 Kentucky Derby (G1) - Coady Photography

The 2019 Kentucky Derby will go down as one of the strangest and most controversial in history, but for handicappers, it’s just another race to dissect the same as any other.

While most of the attention is being focused on the disqualified Maximum Security, the upgraded winner Country House and the troubled pair of War of Will and Long Range Toddy, it’s important for handicappers to take a broader view of the race and analyze how each horse performed from start to finish.

So how did the Kentucky Derby unfold? After reviewing the replay dozens of times, I’ve compiled trip notes for each of the nineteen starters:
Maximum Security broke cleanly from the gate and won the rush to the first turn through a :22.31 quarter-mile, the ninth-fastest in Derby history. He slowed down the pace dramatically during the third quarter-mile, causing the field to bunch up noticeably, then ducked out when switching leads on the far turn, causing a chain reaction that interfered primarily with War of Will and Long Range Toddy. Maximum Security then ducked back to the inside and bumped briefly with Code of Honor before straightening out and battling gamely in the stretch to pull away late and win by 1 3/4 lengths. Maximum Security ran the final quarter in a solid :25.30, but following a lengthy review, he was disqualified for the incident on the far turn and placed 17th.

Country House broke much better than usual, bumped with Code of Honor during the opening furlongs, then settled comfortably in mid-pack while racing wide. He steadily gained ground down the backstretch and around the far turn while racing between horses. He escaped generally unscathed from the incident on the far turn, reached nearly even terms with Maximum Security, but was turned back in the final furlong while holding on for second. He was awarded the victory via disqualification of Maximum Security.

Code of Honor reacted negatively to kickback on a couple occasions during the first half of the race, but nevertheless threaded his way to the rail for a ground-saving trip. When Maximum Security ducked out on the far turn, Code of Honor shot through the opening to claim a narrow lead, but shortly afterward exchanged bumps with the erratic Maximum Security and weakened slightly in the drive to settle for third place.

Tacitus was a step slow to get going, then weaved around repeatedly during the run to the first turn while tossing his head in response to kickback. After settling near the back of the pack, Tacitus advanced gradually in between horses, somewhat awkwardly fought his way through traffic on the far turn, shifted wide for the stretch drive and plugged away under vigorous urging to cross the wire fourth.

Improbable was a bit sluggish while under urging during the opening strides, settled between horses while racing a few lengths off the lead and shifted out for the stretch run, but couldn’t produce the needed acceleration and lost a photo for fourth.

Game Winner was forced inward at the start by stablemate Roadster and bumped with Master Fencer and Win Win Win. That caused Game Winner to drop nearly 20 lengths off the early pace. From there he gradually worked his way back into contention, but raced a minimum of eight paths off the rail around the far turn and ran well under the circumstances to rally and miss second place by just two lengths. According to data from Trakus, Game Winner ran 103 feet (nearly thirteen lengths) farther than Maximum Security.

Master Fencer broke slowly, ducked outward, bumped with Game Winner out of the gate and dropped back to trail by 23 lengths. He was still last at the top of the stretch, but made steady progress up the inside, aimed for a rapidly closing hole between horses and somehow made it through to continue his surge and finish seventh, beaten only four lengths.

War of Will was beaten to the lead from his rail draw and was reluctant to settle in the early going. He shifted off the inside on the far turn to make a run at Maximum Security, but was carried outward sharply when the latter changed leads, and the two horses nearly tangled legs. Despite this obstacle, War of Will re-rallied to challenge at the top of the stretch and was in contention until the final furlong, when he weakened to finish eighth.

Plus Que Parfait enjoyed a remarkably clean run, never racing more than two or three paths off the rail while always having room to run. He was less than two lengths off the lead turning for home and had every chance to contend, but weakened in the drive while beaten just 5 1/4 lengths.

Win Win Win bumped with Game Winner at the start, rated near the back of the pack, steadied slightly behind horses while waiting for racing room on the far turn, and passed tired rivals down the lane.

Cutting Humor settled in mid-pack while outside of horses, attempted to unleash a seven-wide rally around the far turn, briefly steadied to steer around the traffic incident, then came up empty in the homestretch.

By My Standards broke slowly and shifted outward after the start, raced wide and between horses heading around the turn and into the backstretch, then failed to rally when the real running began.

Vekoma was urged to secure good position in the run to the first turn and eventually found himself four wide in fifth place. He came under urging heading into the far turn, was squeezed briefly between horses, and steadily faded through the field.

Bodexpress raced wide while vying for the lead from post 20, but was weakening when squeezed out of a tight spot on the far turn, causing him to drop back farther. He then weaved around early in the stretch and churned on among tired horses to finish 15 lengths behind Maximum Security.

Tax broke outward before settling in mid-pack while racing on the rail. He remained inside every step of the way, but dropped back on the far turn and failed to challenge in the homestretch. According to Trakus, Tax covered the least ground of any horse in the Derby field.

Roadster took a left-hand turn out of the gate, interfering with stablemate Game Winner. He then reacted to kickback, steered wide into the first turn while racing far off the pace and made a mid-race move to gain ground on the leaders, but was fading on the far turn while racing extremely wide and retreated steadily in the lane.

Spinoff was urged out of the gate, raced five wide in seventh place around the first turn, bumped with Vekoma while fading on the far turn and was out of contention at the top of the stretch.

Gray Magician broke a bit awkwardly, got swallowed up in the pack during the opening furlongs, saved ground while racing toward the rear of the field, tried to rally on the far turn, and ran out of steam at the top of the stretch.
Racing