Each year the American Quarter Horse Association (AQHA) honors their top racing champions in a variety of categories. A committee of owners, breeders and industry leaders are selected to evaluate Quarter Horses who have raced in the United States, Canada and Mexico. The breed's most distinguished award is the naming of the AQHA world champion.

The 2014 honoree is Jrc Callas First. Bred in Texas, the son of Winners Award out of the Dirty Coup mare Calla Missy Jane is owned by Dana and Brian Stroud, who also trains the bay runner. The 4-year-old gelding, under regular rider, Damian Martinez,  began his year by racking up a succession of stakes victories at Sam Houston and Retama Park. He headed to Lone Star Park in September, becoming the  only horse in their history to win both the 400-yard BF Philips and $75,000 Refrigerator Handicap (G1). His victory in the $150,000 Zia Park Championship last November, over a full field of graded stakes winners, vaulted him into national prominence.

On January 21 in Oklahoma City, the AQHA Champions were announced and Jrc Callas First was honored with three titles for his performance in 2014: AQHA World Champion, Champion Gelding and Champion Aged Horse. 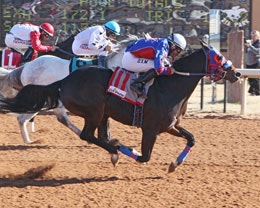 It was a thrill of his lifetime for the Strouds; Dana had sold her Paint horse to help Stroud with the purchase of Jrc Callas First. Jrc's career earnings of $227,914 helped the Strouds build their dream home in Sutherland Springs, Texas. Construction of a new barn on their property is in the works. As far as the 21-year-old Martinez was concerned, it boosted his career substantially and he began to pick up more quality mounts. He won the leading rider title in the 2015 Sam Houston Race Park meet.

Stroud is a native Texan who has been training since 1991. Conditioning a world champion in the Quarter Horse world is similar to winning the Kentucky Derby or Breeders' Cup Classic for a Thoroughbred trainer. The end result is that Stroud has more than doubled his stable since the big announcement in January.

Jrc Callas First had minor surgery at the end of 2014 and made his first start of the  year in the $50,000 Sam Houston Classic, running third. He scored his first victory of his 5-year-old campaign on June 24 at Retama Park near San Antonio, Texas, winning the $15,000 Tower of America Handicap by two lengths. His connections confirmed that the bay gelding will remain at Retama Park and return to action in the TQHA 550 Stakes on July 24. He has won each of his five starts at the distance of 550 yards.

The Strouds and Martinez are hoping that their Texas-bred will keep the wins coming as stakes at Retama Park, Lone Star Park and Zia Park are targeted for the remainder of his 2015 schedule.
Racing
Loading...