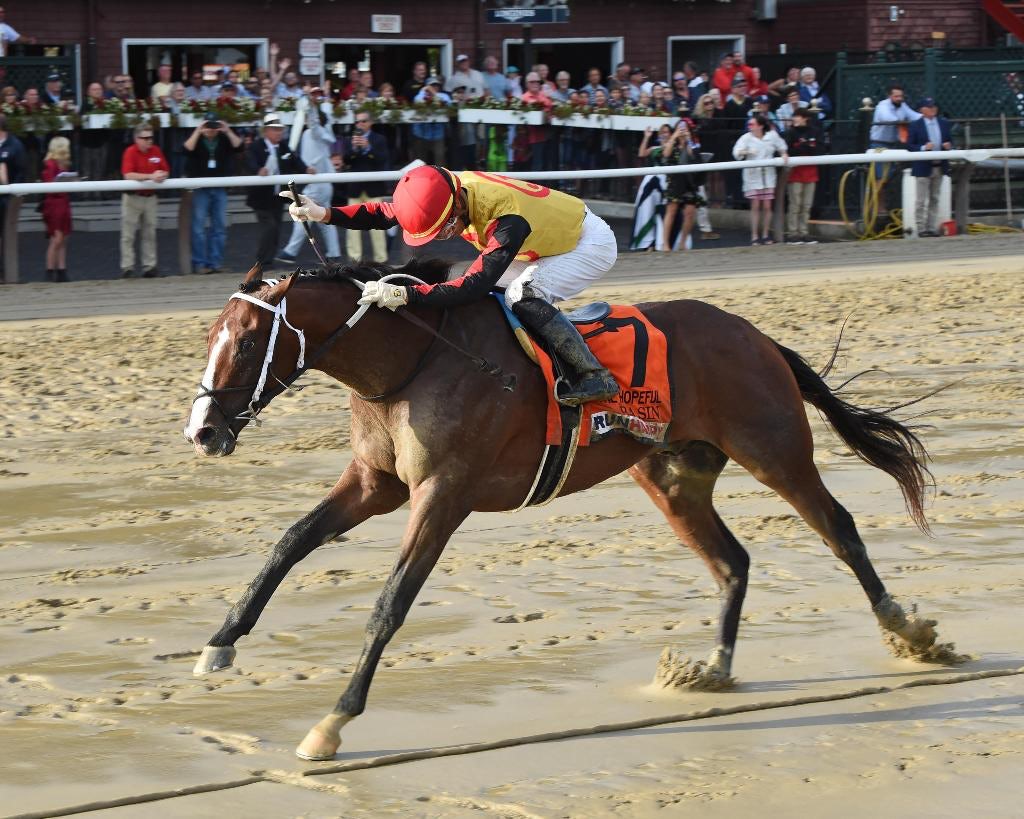 It’s been many years since a winner of the $350,000 Hopeful Stakes (G1) at Saratoga went on to achieve success in a Triple Crown race.

The Hopeful-Kentucky Derby double has proven particularly elusive. No horse has swept the two races since Triple Crown winner Affirmed in 1977-1978.

No one is comparing Basin to Affirmed just yet, but the Steve Asmussen-trained colt has made a positive impression in his first three starts, and his dominant triumph in the 2019 Hopeful suggests he might be on the verge of a very productive racing career.

Basin left no doubt about his superiority in the Hopeful. After an alert break under jockey Jose Ortiz, Basin soon settled into third place as stablemate Gozilla dueled with American Butterfly through quick fractions of :22.66 and :45.84. All the while Basin appeared full of run and poised to strike at any moment.

“I saw them going at it, and it was the first time going seven furlongs, so you’ve got to be a little careful,” Ortiz told the New York Racing Association publicity department. “I just took my time. I could have moved a little earlier, but I didn’t want to, since they were fighting. I gave my horse a really nice breather from the half-mile (pole) to the quarter pole, and that made a difference. I made just one move with him.”

And what a move it was. Basin raced a little greenly at the top of the stretch, as he drifted out suddenly while he rallied into contention, but once Ortiz straightened him out, Basin got down to business and opened up with authority down the lane. In front by 1 1/2 lengths at the eighth pole, Basin extended his advantage to 6 1/2 lengths at the finish line. Another Asmussen trainee, Shoplifted, rallied from last place to edge the weakening Gozilla for the runner-up spot, which gave Asmussen a sweep of the Hopeful Stakes trifecta.
“I’ve always been surprised with how much speed (Basin) showed,” Asmussen said. “Physically and pedigree wise, we were excited about him running long, and we were surprised at how sharp he was the first time he ran.”

Basin stopped the clock for seven furlongs in 1:23.48, which earned an 85 Beyer speed figure that ranks as one of the highest numbers assigned to any 2-year-old male so far this year. He previously finished second by a nose in his debut at Churchill Downs before he won a competitive Saratoga maiden race with an 86 Beyer.

As a son of 2015 Breeders’ Cup Dirt Mile (G1) winner Liam’s Map, out of a mare by Breeders’ Cup Juvenile (G1) winner Johannesburg, Basin has the pedigree to excel running a mile or perhaps farther. This bodes well for his chances of early success on the Road to the Kentucky Derby, in which case he would follow in the hoofprints of his older half-brother Rise Up, who joined the Derby trail with his victory in the 2013 Delta Downs Jackpot Stakes (G3).

Asmussen expects Basin, Shoplifted and Gozilla to head their separate ways for the time being. For Basin the October 5 Champagne Stakes (G1) at Belmont Park could be a logical target, since a victory in that “Win and You’re In” qualifier for the Juvenile would place Basin in the driver’s seat for champion 2-year-old honors.
Racing