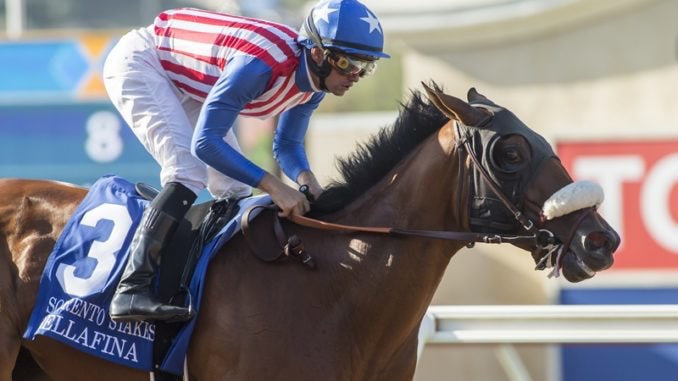 At some point in the lengthy history of the $2 million Breeders’ Cup Juvenile Fillies (gr. I), there has probably been a better field than the one that has assembled for Friday’s renewal of the race at Churchill Downs. But I’d be hard-pressed to tell you which field that might have been, because quite frankly, the 2018 Juvenile Fillies is shaping up to be a terrific race with top-to-bottom quality.

Ten fillies have been entered in the 8.5-furlong championship event, which will award the winner 20 qualification points on the 2018-19 Road to the Kentucky Oaks. Throw in the winner’s share of the purse (which amounts to more than $1 million) and a probable Eclipse Award as the champion two-year-old filly of the year, and it’s understandable why such an impressive field has turned out.

The cream of the crop, and the 2-1 morning line favorite, is Bellafina, who ships in from California after rattling off consecutive victories in the Sorrento Stakes (gr. II), Del Mar Debutante (gr. I), and Chandelier Stakes (gr. I). Trained by Simon Callaghan, the daughter of Quality Road boasts terrific early speed as her greatest weapon, though in the Chandelier—which marked her first start around two turns—she also showed tractability while rating in second place early on, so she’s not exclusively a front-runner.

That’s a good thing, because in Serengeti Empress, Bellafina will be facing a formidable rival with an abundance of front-running speed. Just look at what Serengeti Empress has accomplished in her last two starts—a powerful 13 ½-length romp in the Ellis Park Debutante Stakes and an effortless 19 ½-length tour-de-force performance in the Pocahontas Stakes (gr. II) over the same track and distance as the Juvenile Fillies. That’s two straight stakes wins by a combined 33 lengths—there’s no telling how good Serengeti Empress might be.

But wait—those aren't the only multi-stakes winners entered in the Juvenile Fillies. Jaywalk won the White Clay Creek Stakes at Delaware Park with a rally from off the pace, then stepped up in class for the Frizette Stakes (gr. I) and crushed the field gate-to-wire by 5 ¾ lengths. She’ll help ensure a strong early pace, which could be beneficial for the versatile Restless Rider, who won the Debutante Stakes at Churchill Downs this summer by 11 ¼ lengths. Following a runner-up effort in the Spinaway Stakes (gr. I) while rallying from mid-pack, Restless Rider stayed closer to the pace in the Darley Alicibiades Stakes (gr. I) and produced a strong finish to win by 2 ½ lengths.

Sippican Harbor hasn’t run since September 1st, but on that day she produced a powerful finish to win the Spinaway Stakes by two lengths over Restless Rider, so she’s yet another filly with the proven class to compete and win at the Grade 1 level. Cassies Dreamer, who finished third in the Spinaway and third again in the Frizette, adds further Grade 1 depth to the Juvenile Fillies field, along with the Alcibiades runner-up Reflect and the Chandelier Stakes runner-up Vibrance. Completing the field for the Juvenile Fillies are Splashy Kisses, runner-up in the Pocahontas, and Baby Nina, winner of the Miss Ohio Stakes at Thistledown and tenth in the Spinaway Stakes.

The Juvenile Fillies is the seventh race at Churchill Downs on November 2nd, with a post time of 4:40 p.m. Eastern. Check out the complete schedule of Breeders’ Cup races here!