Saturday, Oct. 3rd's featured BetAmerica Racing Contest is the $1,000 Graded Stakes Game. There is also a great contest going on for Red Mile. I'm not usually a big harness bettor. But, since Merv at BetAmerica told me that the card was a great one, I'm definitely going to take a look.

I've already made my selections for the $1,000 Graded Stakes Game. The races are Keeneland 5 through 9 and Belmont 7 through 10. Rains are expected to hit both Belmont and Keeneland on Saturday.

Pick: 2-Mongolian Saturday 6/1 - The Grade 3 Woodford is a 5 1/2 furlong race over the turf. It's doubtful that they move the race to the dirt, which means that the selection for the race should be a horse that runs well over yielding (soft) or at least good turf. Mongolian Saturday is in excellent form. He's finished first or second in his last 5 races. He won a 5 1/2 furlong sprint over yielding turf at Arlington Park only 2 races back.

Pick: 3-Nemoralia 5/1 - The Grade 1 Frizette at a mile over the dirt is for two-year old fillies. Although Nemoralia has never run over dirt (or mud!), she was sired by More Than Ready. Her broodmare was sired by Came Home. Nemoralia also gets Joel Rosario and runs with first time Lasix for the Frizette and she goes into this off of 2 wins.

Pick: 5-Leigh Court 3/1 - The Grade 2 6 furlong Thoroughbred Club of America for fillies and mares 3 and up over the dirt is going to have a huge favorite in 6/5 on the morning line Judy the Beauty. It doesn't look there is a lot of speed to press Leigh Court, though. Because the dirt surface is likely to be sealed, Leigh Court might be able to coast over it to the finish line first.

Pick: 3-Ready Dancer 5/1 - Ralis, the winner of the Grade 1 Hopeful, will be the chalk in the 1 mile Grade 1 Champagne on Saturday. Ready Dancer goes into the Champagne off of a maiden score. Usually, that would be an issue, but trainer Todd Pletcher knows what he's doing. Any improvement could put Ready Dancer into the winner's circle.

Pick: 11-Tepin 5/2 - On paper, the Grade 1 The First Lady looks like a contentious affair. Crowley's Law, Outstanding, Easter and My Miss Sophia all figure to get some play. But, the closer I looked at this race the more Tepin, the chalk, made sense. If there is any give to the ground at all, jockey Julien Leparoux is likely to just put her on the lead and run to a win. I usually hate selecting chalk in contests, but there just isn't enough speed to challenge the Just A Game winner.

Pick: 3-Hawkbill 8/1 - I really think that the Grade 1 Breeders' Futurity is a wide-open event because a lot of these horses are going around 2 turns for the first time. Charles Appleby, who won the 2013 BC Juvenile Turf with Outstanding, thinks enough of Hawkbill to put him into this race. Although Hawkbill isn't exactly bred for the turf, he was sired by Kitten's Joy and is out of a Giant's Causeway mare, he has run well over an artificial surface, he's won 3 in a row, and he gets Lasix for the first time. 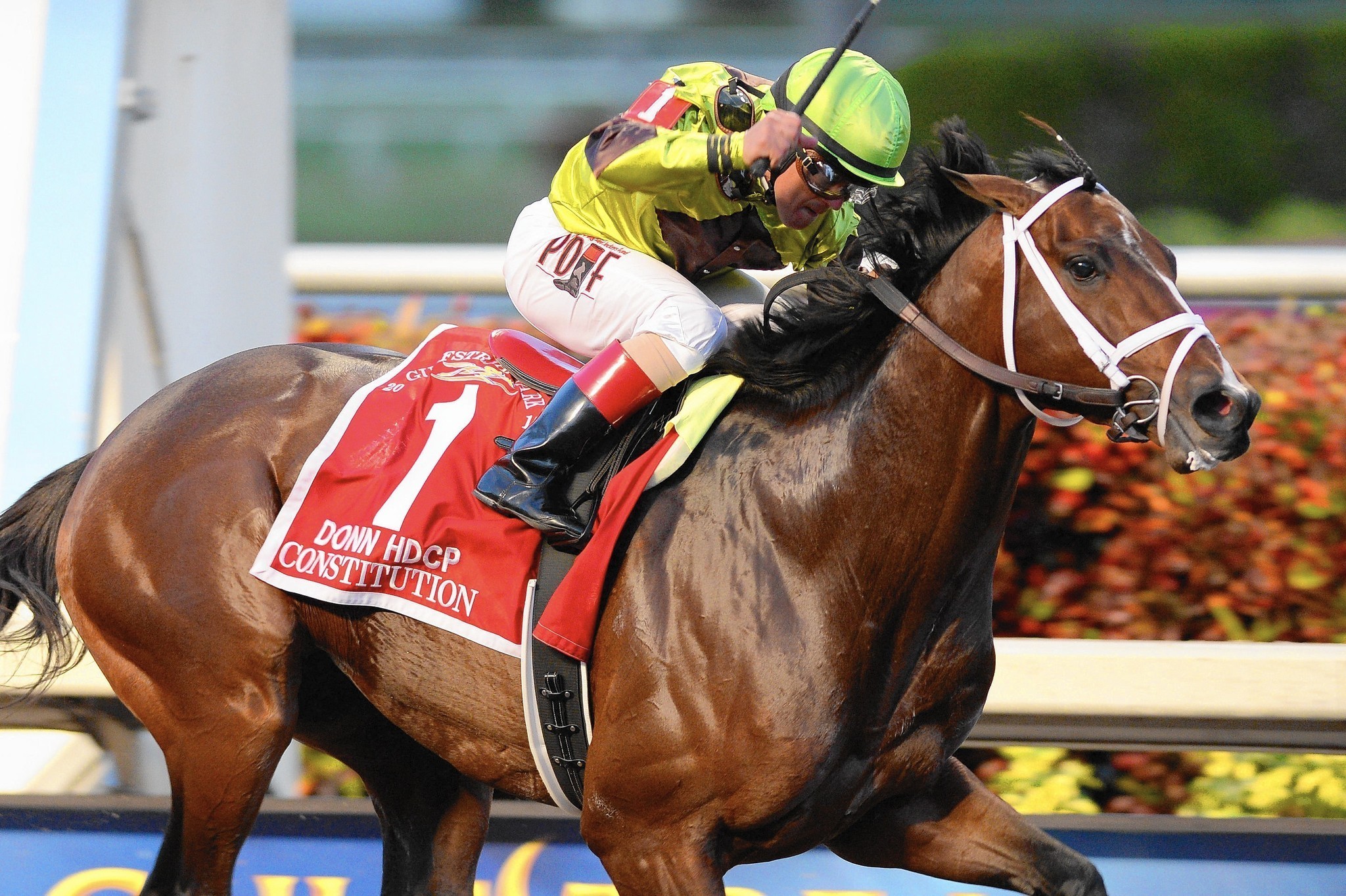 Pick: 3-Constitution 3/1 - The Grade 1 Jockey Club Gold Cup is at 1 1/4 miles over the dirt. 1 1/4 mile races start on the turn at Belmont. The favorite at 6/5 is Tonalist. I like Constitution. You can't knock the front-runner for not wiring the excellent field that he faced in the Grade 2 Bernard Baruch in his last. It was his first race since winning the Grade 1 Donn Handicap in February. It was also his first try over the turf. He'll get the lead. The only other speed appears to be the other Pletcher trainee, Coach Inge. It's doubtful that Coach Inge is less than 1 1/2 to 2 lengths behind Constitution in this. I think Constitution goes gate-to-wire. 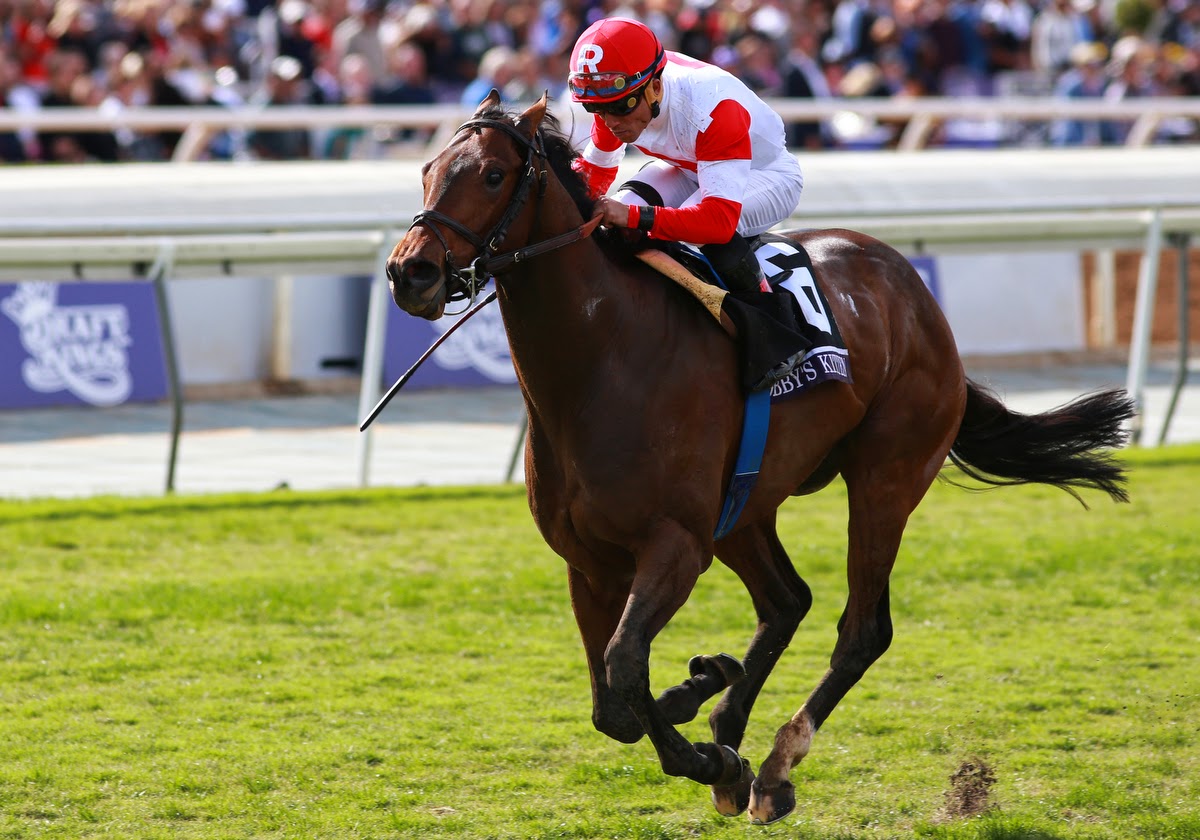 Pick: 9-Bobby's Kitten 6/1 - Man, it's hard to find a winner in the Grade 1 Shadwell Turf Mile!  The chalk is Dutch Connection at 4/1. Dutch Connection could win. So could Seek Again. So could Grand Arch or Heart to Heart. I settled on Bobby's Kitten. Bobby's Kitten ran terribly in his last race. But, that was his first race since winning the BC Turf Sprint last November. He had a reason to run so badly. The Chad Brown trainee is tractable and there should be pace if nobody scratches since King Kreesa, and Heart to Heart all figure to vie for the lead. Mike Smith should be able to get Bobby's Kitten into position for the stalk and pounce.