Breeders' Cup Classic Top 10: A new name at the top 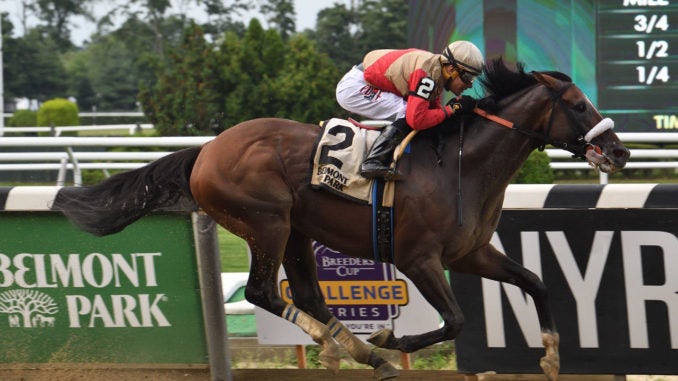 When was the last time we were four months out from the Breeders’ Cup Classic (G1) and the division lacked anything resembling a clear-cut group of top contenders?

This year’s Classic division is among the most wide-open in recent memory, thanks to an inconclusive season and a lack of standout older males. The Classic contenders have not been running particularly fast on the Beyer speed figure scale, which suggests almost any good horse could step up and become a serious win threat by November.

In the meantime here’s how I tentatively view the top 10 contenders for the Classic. I loved everything about Preservationist’s dominant victory in the Suburban Stakes (G2) at Belmont Park. He showed tactical speed and initially set the pace, but then rated comfortably along the inside when Catholic Boy became unsettled and took over. He rallied smoothly up the inside on the far turn to challenge for the lead, then flew home the final quarter-mile in :24.31 to win by 4 1/2 lengths in 1:59.99 (a 108 Beyer speed figure). Preservationist has had difficulty stringing races together in the past and has run just eight times in the last three years, but the 6-year-old son of Arch seems to be back on track and looms as a major player in the Classic division if he stays sound.
The Aug. 3 Whitney Stakes (G1) at Saratoga has been mentioned as Thunder Snow’s next target, though it won’t be an easy spot. The Whitney has produced three of the last nine Breeders’ Cup Classic winners and figures to attract a deep field. McKinzie, Vino Rosso and Gunnevera, all ranked in my top 10, are also targeting the Whitney. The Metropolitan Handicap (G1) runner-up breezed a half-mile in :47.80 June 30 as he gears up for another meeting with Thunder Snow, who finished just a neck behind McKinzie in the Met Mile. But that margin might be slightly deceiving, because McKinzie had a tough trip and wasn’t able to lengthen his stride until very late in the homestretch. With a victory in the Stephen Foster Handicap (G2) and a runner-up effort in the Pegasus World Cup (G1) under his belt, Seeking the Soul has compiled an admirable record against good company this year. His late-running triumph in the Stephen Foster yielded a 104 Beyer, a solid number in a year when not a single older male has cracked the 110 barrier. Despite his 4 1/2-length margin of defeat, Catholic Boy didn’t run poorly in the Suburban. He was rank early on and prematurely hauled his rider to the lead, but fought on gamely through the homestretch to finish second with a 102 Beyer. Now we’ll just have to wait and see whether his connections continue with a dirt campaign or switch Catholic Boy back to turf, which might be his preferred surface. He recently shipped from Belmont Park to Saratoga, where he breezed an easy half-mile in :49.52 July 5 in preparation for the Whitney. His victory in the Gold Cup at Santa Anita (G1) was a step in the right direction and his first graded stakes win since the 2018 Wood Memorial (G2). Now we’ll see if Vino Rosso can keep this positive momentum going. If you’re looking for a 3-year-old who could make some noise during the second half of the season, King for a Day might be the one. Although he missed the Kentucky Derby (G1) prep season, King for a Day returned a winner in the Sir Barton Stakes at Pimlico, where he decisively defeated a small but talented field. Then King for a Day took on the disqualified Kentucky Derby winner Maximum Security in the Pegasus Stakes at Monmouth Park and unleashed a relentless rally to win by a length with a 102 Beyer. Trained by Todd Pletcher, this son of Uncle Mo is on the rise and could be the “now” horse this summer. Maximum Security didn’t run poorly in the Pegasus, where he finished second after a stumble at the start, and even in defeat he posted his fourth triple-digit Beyer of the season. Considering how trainer Jason Servis wasn’t thrilled with how Maximum Security was training beforehand, this might be an effort Maximum Security can build on. Although Gift Box disappointed as the favorite in the Stephen Foster, where he failed to seriously threaten and came home fourth, I’m willing to forgive this performance for a couple of reasons. First and foremost, he was racing just 19 days after he ran hard to finish second in the Gold Cup at Santa Anita over a deep and tiring track. The Stephen Foster was something of a last-minute addition to his race schedule, and then he endured a wide trip to boot. Given more time to recover, I think we’ll see him rebound next time out. The Arkansas Derby (G1) winner is slowly working his way back into serious training and could still re-emerge as one of the leading 3-year-olds in the nation. He was just reaching peak form before missing the Kentucky Derby because of an entrapped epiglottis, so if he returns none the worse for wear, I’m curious to see what kind of an autumn campaign he can put together. Having posted a 101 Beyer in the Arkansas Derby, it’s not hard to imagine he could run faster with the benefit of maturity this fall.
Racing