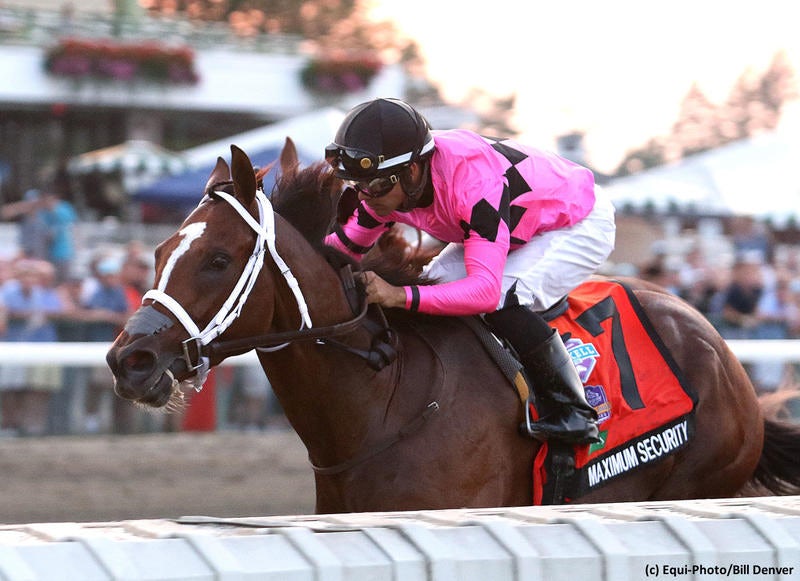 Slowly but surely the top contenders for the Nov. 2 Breeders’ Cup Classic (G1) at Santa Anita are sorting themselves out.

The Haskell Invitational (G1) and the Jim Dandy Stakes (G2) served to clarify aspects of the 3-year-old division, while a quartet of top-ranked older runners will square off in the Aug. 3 Whitney Stakes (G1) at Saratoga, a race that will surely shake up the division leaders.

In advance of this highly anticipated showdown at Saratoga, here’s how I rank the top 10 contenders for the Breeders’ Cup Classic. The impressive Suburban Stakes (G2) winner will try to nab his first grade 1 win in the Whitney Stakes (G1), where he’ll face Thunder Snow and McKinzie. His early speed could give him the tactical advantage he needs to spring a mild upset. If this somewhat delicate runner can string together another big performance, he’ll emerge as the Classic favorite. The world-traveling Thunder Snow has arrived at Saratoga for the Whitney, where he’ll seek his first victory in North America in his fifth try. The 1 1/8-mile distance of the Whitney should be more to his liking than the one-turn mile of the June 8 Metropolitan Handicap (G1), where he outran expectations off a layoff to finish third. The disqualified Kentucky Derby winner seized command of the 3-year-old division with his victory in the Haskell Invitational (G1), his second grade 1 win of the season. He also posted a 102 Beyer speed figure, his fifth straight triple-digit number. The Met Mile runner-up breezed six furlongs in 1:11 4/5 July 23, likely his penultimate move before facing Preservationist and Thunder Snow in the Whitney at Saratoga. McKinzie has a history of coming up short when facing tough competition, but most handicappers agree he suffered from a poor trip in the Met Mile and might have been the best horse on the day. With a 3-for-3 record going 1 1/4 miles, including back-to-back wins in the Delaware Handicap (G2), Elate certainly has no trouble negotiating the distance of the Breeders’ Cup Classic. It’s too early to say if she’ll target the Distaff or swing for the fences in the Classic, but her connections told the Thoroughbred Daily News the 1 1/4-mile Jockey Club Gold Cup (G1) Sept. 28 against males at Belmont Park is a possibility. A strong showing there could potentially propel Elate to a start in the Classic. Although Seeking the Soul is highly accomplished at distances up to 1 1/8 miles, his lone start at 1 1/4 miles yielded an eighth-place finish in the 2019 Dubai World Cup (G1). He’ll get another chance to stretch his closing kick over 10 furlongs when he ships west for the Aug. 17 Pacific Classic (G1) at Del Mar. Rather than switch back to grass following his defeat in the Suburban Stakes (G2), Catholic Boy will stay the course on dirt and target the Aug. 31 Woodward Stakes (G1) at Saratoga. This seems like a logical approach, because Catholic Boy didn’t run poorly in the Suburban, where he finished second with a 102 Beyer after a premature move to set the pace. Vino Rosso burst onto the Classic scene with his victory over Gift Box in the Gold Cup at Santa Anita (G1), but he’ll receive a stiff class test when he lines up against Preservationist, Thunder Snow and McKinzie in the Whitney. I don’t expect him to win at 1 1/8 miles—1 1/4 miles seems more to his liking—but as long as Vino Rosso stays on strongly and finishes within four or five lengths of the winner, I’ll view it as another positive step for this accomplished but inconsistent runner. After returning on short rest to finish a weakening fourth in the Stephen Foster Handicap (G2) behind Seeking the Soul, Gift Box will get a rematch with his conqueror in the Pacific Classic (G1). With plenty of time between starts, I expect Gift Box to come back refreshed in the Pacific Classic, and the 1 1/4-mile distance should help his chances. Don’t forget he out-battled McKinzie to win the 1 1/4-mile Santa Anita Handicap (G1) in the spring. The Arkansas Derby (G1) winner finally returned to the work tab July 23 at Del Mar, where he breezed three furlongs in :36 3/5. Now that he is on the comeback trail, it’s just a question of how quickly Omaha Beach can return to peak fitness. With luck he might have time to squeeze in two prep runs prior to the Breeders’ Cup.
Racing