Breeders' Cup Distaff Could Be A Legendary Race 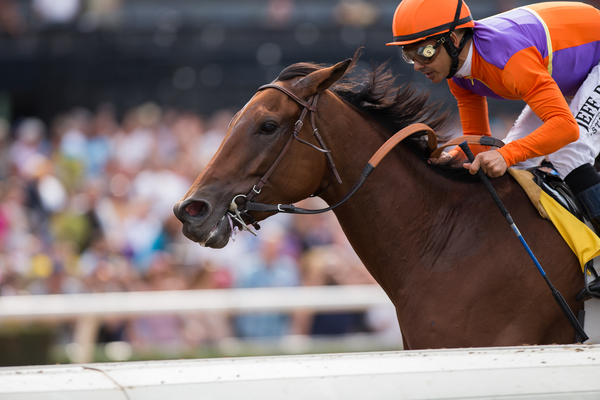 A lot of buzz is starting to build around this year's Breeders' Cup. The Breeders' Cup takes place over the course of 2-days, Friday, Nov. 4 and Saturday, Nov. 5, at Santa Anita this year. Although California Chrome, the world's best horse, runs on Breeders' Cup Saturday in the Classic, it's the BC Distaff that could emerge as a legendary, never forget, race. See below for my Top 5 contenders. Odds listed are my personal odds for the Breeders' Cup Distaff, the featured race, on Friday, Nov. 4.

The super mare is probable for the Grade 1 Zenyatta Stakes on Oct. 1. How she runs in that race is going to determine whether or not she takes on California Chrome and Arrogate in the Breeders' Cup Classic or goes to the Distaff. My belief is that trainer Richard Mandella has already decided to run Beholder in the BC Distaff. She's still tops in the division. To me, she ran an excellent race against California Chrome in the Pacific Classic. But, Papa Mandella knows that she's up against it versus Chrome and Arrogate. She'd have a real shot to beat 3-year old filly sensation Songbird in the Distaff. Plus, it would make for an exciting, top duel among five excellent horses.

Songbird's win the Grade 1 Cotillion makes her 11 out of 11. It also means that she's won races at Del Mar, Santa Anita, Keeneland, Saratoga and Parx. That's incredible. She's 5 for 5 at Santa Anita. She's won races from 6 furlongs, in her maiden win, all the way up to 1 1/4 miles in the the Grade 1 Alabama at The Spa. It's important to note that in Songbird's Cotillion win she showed the ability to rate behind a front runner. Although she's always had that ability, in the Cotillion she was super relaxed. There's no telling how good Songbird is. A win over Beholder and Stellar Wind in the Breeders' Cup Distaff would give us a clue.

She has 3 wins and 1 second place finish in 4 races over the Santa Anita dirt. The real advantage that she has in this race is that she proved she's just as good as Beholder in the Clement L. Hirsch, or can be as good as Beholder on any given day. Also, the pace of the race should flatter Stellar Wind in this. There's a good chance she gets the catbird seat, about 2 to 3 lengths, off of Beholder and Songbird as those 2 duel on the front end. If that happens, Stellar Wind should get the jump on both Curalina and Cavorting.

Curalina could run in this Saturday's Beldame at Belmont Park. She's likely to use that race as a prep for the Breeders' Cup Distaff. How good is Curalina?  When the race sets up for her, she can be exceptional. Johnny V. kept her close to the pace in the Grade 3 Shuvee, the race that I've attached above. The quarter in that race was :24.28. The half-mile was :48.59. She'll be about 5 to 6 lengths off the pace in the Distaff on Nov. 4. Curalina has a fantastic kick. If the track is playing fair, she could have a say in the outcome of the Distaff at much bigger odds than 6 to 1.

I have to admit that based on likely odds, I'm leaning this way. The Kiaran McLaughlin trainee has been absolutely sensational in her last 3 races. She's won the Grade 2 Ruffian, the Grade 1 Ogden Phipps and the Grade 1 Personal Ensign. I've attached her Personal Ensign win to show how quickly she made up ground versus Curalina and I'm A Chatterbox chasing an incredibly soft pace. She also went wide around the final turn at Saratoga. The most impressive thing?  How about how she responded to jockey Javier Castellano's cues through out the entire race?  Cavorting has a huge shot of upsetting things at overlay odds in the 2016 Breeders' Cup Distaff. I'm sort of hoping she loses in the Beldame on Oct. 1 so that she goes into the Distaff at bigger odds than expected.