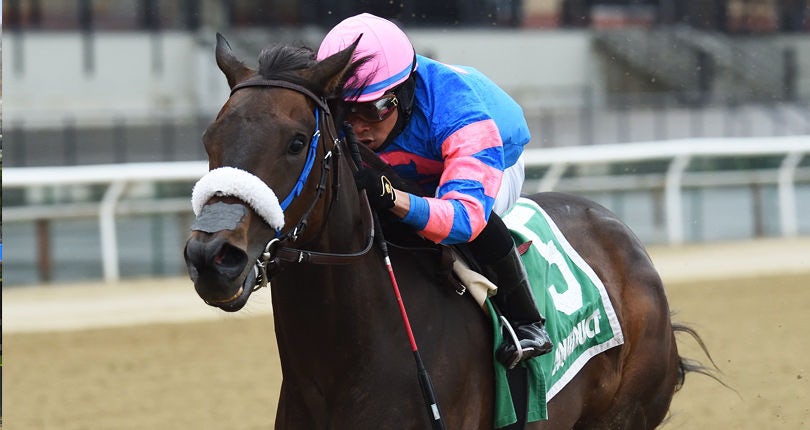 Ranking the top contenders for the 2019 Breeders’ Cup Filly & Mare Sprint (G1) at Santa Anita is harder than it sounds.

The division leaders have taken turns beating each other and have shifted in and out of form through the spring and summer. Adding to the confusion, last year’s winner Shamrock Rose has been retired, and six-time graded stakes winner Marley’s Freedom hasn’t posted a timed workout since July, which puts her status for the Breeders’ Cup into doubt.

The good news? The remaining contenders for the Filly & Mare Sprint have occasionally demonstrated serious speed and talent, so the seven-furlong showdown November 2 should be a great race no matter who prevails. Come Dancing had a few good reasons to lose the seven-furlong Ballerina Stakes (G1) at Saratoga. She was squeezed back to last at the start and was further compromised by a slow early pace. Despite these obstacles Come Dancing rolled past her rivals with authority and cruised to a 3 1/2-length triumph. Her fast finish (final three furlongs in :35.62) was promising, and while her 96 Beyer wasn’t blazing, we know she’s capable of faster. She threw down a 114 to win the Distaff Handicap (G3) in April. She’s emerged as the mare to beat.
Three-year-olds don’t have the best record in the Filly & Mare Sprint, but Covfefe has shown flashes of brilliance during her brief career and might defy the trend. After she shattered Pimlico’s six-furlong track record in the Miss Preakness Stakes (G3), where she won by 8 1/2 lengths in 1:07.70 for a 107 Beyer, Covfefe finished less than a length behind older grade 1 winner Mia Mischief in the Roxelana Stakes at Churchill Downs after she dueled hard for the early lead. Back against her own age group, Covfefe successfully stretched her speed over seven furlongs in Saratoga’s Test Stakes (G1), where she battled Kentucky Oaks (G1) winner Serengeti Empress in a thrilling finish. Come November, Covfefe might be more than a match for the division’s best older mares.
After she set fast fractions in the Test, Serengeti Empress was game to the finish and only lost by a half-length against Covfefe (conceding that rival four pounds). Serengeti Empress left multiple grade 1 winner Bellafina 8 3/4 lengths behind in third place, so although Serengeti Empress has achieved most of her success around two turns, she’s also flashed the speed to be competitive in elongated sprints like the Filly & Mare Sprint. Serengeti Empress also finished second in the one-turn-mile Acorn Stakes (G1) at Belmont after she posted blazing fractions of :21.89, :43.99 and 1:08.03. Dueling Covfefe into submission in the Roxelana Stakes seemed to take a toll on Mia Mischief, since she subsequently struggled home fourth in the Honorable Miss Handicap (G2) and fifth in the Ballerina, both at Saratoga. But Mia Mischief’s Roxelana performance was no fluke—she had previously defeated a quality field in the seven-furlong Humana Distaff Stakes (G1) at Churchill Downs—so if she bounces back to her spring form, Mia Mischief can still be a major player in the Breeders’ Cup. Based in California with trainer Peter Miller, Spiced Perfection hasn’t run since she finished fourth behind Mia Mischief in the Humana Distaff, but she has been training steadily at San Luis Rey Training Center and should return to action in the fall. It would be a mistake to let this five-time stakes winner slip through the cracks. She is a two-time grade 1 winner sprinting seven furlongs, where she has claimed the La Brea Stakes (G1) at Santa Anita and Keeneland’s Madison Stakes (G1). She’ll also have a home-court advantage with the Breeders’ Cup in California.
Racing