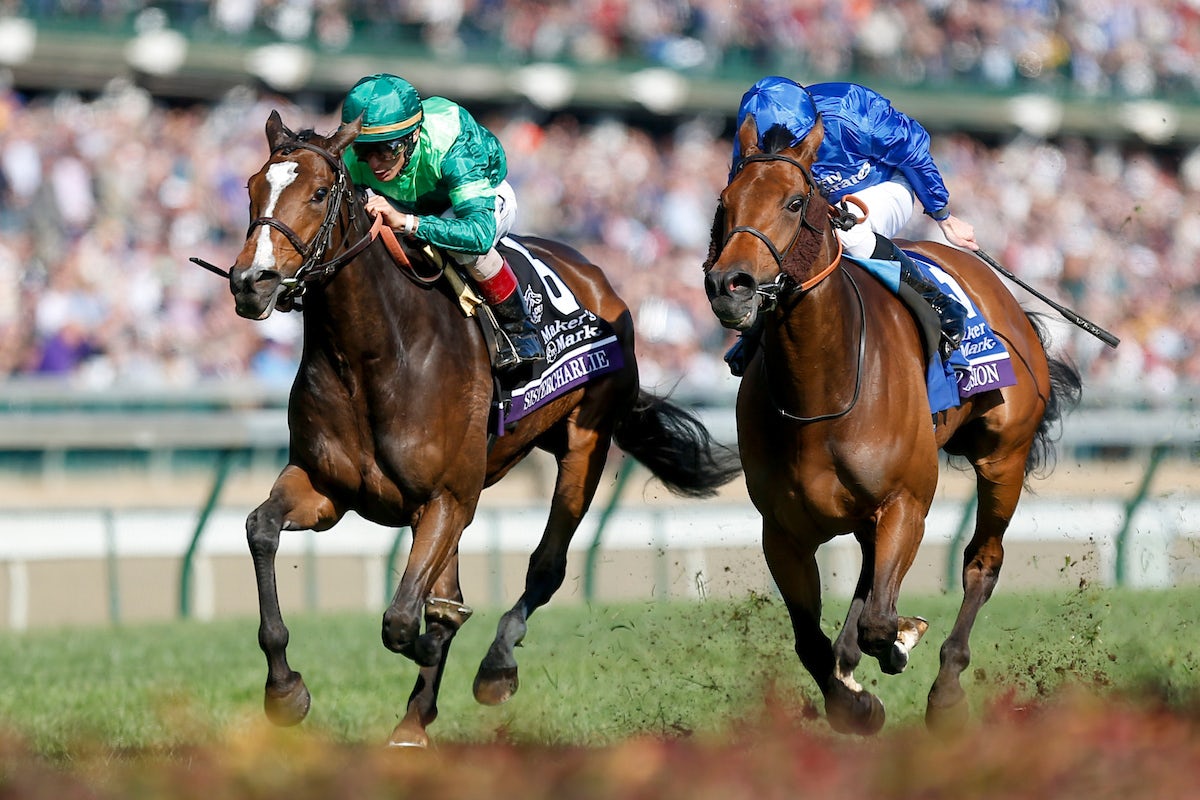 Although we’re still 2 1/2 months away from the 2019 Breeders’ Cup at Santa Anita, a clear favorite has already emerged for the Breeders’ Cup Filly & Mare Turf (G1).

I’m not talking about trainer Chad Brown and his brigade of talented turf mares, though you didn’t miss the mark by much. I’m referring specifically to Brown’s six-time grade 1 winner Sistercharlie, who has given notice to all her potential rivals that she’ll be a force to reckon with come November 2.

Which runners might challenge Sistercharlie in the Breeders’ Cup Filly & Mare Turf? Here’s how I currently rank the top 10 contenders for this championship race. The reigning Filly & Mare Turf winner has come back better than ever in 2019, as she's scored powerful triumphs in the Diana Stakes (G1) and Beverly D. Stakes (G1). In the Beverly D. at Arlington Park, Sistercharlie came roaring down the homestretch to win by three lengths in course-record time. Although she handled 1 3/8 miles just fine in last year’s Filly & Mare Turf, the 1 1/4-mile distance of this year’s championship event should be ideal for Sistercharlie.
Last year’s Breeders’ Cup Turf (G1) runner-up is set to clash with superstar Enable in the August 22 Darley Yorkshire Oaks (G1) in England. If Magical gives the Filly & Mare Turf a try in 2019, she’ll be a formidable opponent for Sistercharlie, though another run in the 1 1/2-mile Turf seems more likely at this point. Like Sistercharlie, Laurens has accumulated a half-dozen group 1 wins during her career, including a recent triumph in the one-mile Prix Rothschild Stakes (G1) at Deauville. She’s targeting the Breeders’ Cup, with the Mile the likely goal, but considering she won the 1 5/16-mile Longines Prix de Diana (G1, French Oaks) last year, it’s hardly a stretch to think this versatile filly could also be dangerous in the Filly & Mare Turf. Although Rushing Fall was no match for Sistercharlie in the Diana, there’s no disgrace finishing second to a champion. It’s possible 1 1/4 miles is a bit beyond Rushing Fall’s best distance, but her tactical speed is an asset, and in terms of class, she fits with the best. Maybe she’s capitalizing on a weak turf male division, but Magic Wand has run well in a series of major open turf races this year, most recently a runner-up effort in the 1 1/4-mile Arlington Million (G1). Fourth in last year’s Filly & Mare Turf, Magic Wand should enjoy the shorter 10-furlong event, though the longer Turf against males might be the easier spot. Homerique didn’t have the best of trips in the Diana, where she fell too far off the pace and encountered some traffic down the lane, but she was only beaten two lengths by Sistercharlie and a neck by Rushing Fall. The Winner of the 1 1/4-mile New York Stakes (G2), Homerique can rebound with a better setup next time. Awesometank has never won a group or graded stakes race, but she outran expectations in the Beverly D., where she was clearly second-best behind Sistercharlie. Conditioned in England by William Haggas, Awesometank might be the type of filly who thrives over tight-turning U.S. racecourses, in which case a return to North America for the Filly & Mare Turf would be a logical goal. Beau Recall has quietly compiled a solid record this year, most recently with a closing victory in the Yellow Ribbon Handicap (G2) at Del Mar. She’s thriving under the care of trainer Brad Cox and ran a deceptively good race against Rushing Fall in the Just a Game Stakes (G1) two starts back. This late-running mare could blow up the Breeders’ Cup exotics at a big price. With 14 victories from her last 17 starts, it’s safe to say Vasilika is a win machine. She finished behind Beau Recall and Storm the Hill in the Yellow Ribbon last time out, but she was closing strongly at the finish to come up just a half-length short of victory. Vasilika handled the course and distance of the Filly & Mare Turf when she won the 2018 Rodeo Drive Stakes (G1), so at least 1 1/4 miles isn’t a question mark. Although she was no match for Concrete Rose in the Belmont Oaks (G1), Cambier Parc had little difficulty unleashing a big rally to win the Del Mar Oaks (G1) by 1 1/4 lengths. She was facing easier competition, and that surely made a difference, but Cambier Parc also received a better pace setup and capitalized in a big way.
Racing