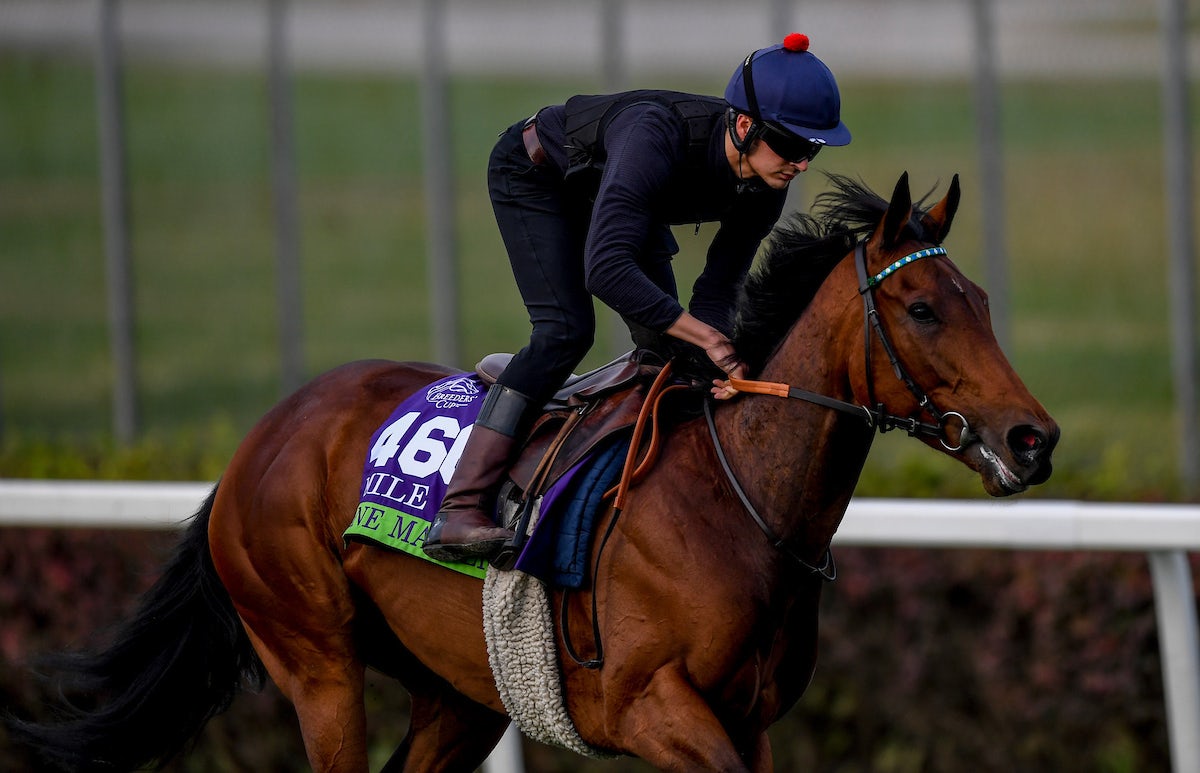 The one-mile grass event typically attracts a strong field of North American representatives and a high-class contingent of international challengers. The 2019 Mile figures to be no exception, and in attempting to compile a ranking of the top five contenders, I’ve scoured the globe in search of milers with the speed and turn of foot to excel at Santa Anita Park in November.

Here are the five horses I’ve come up with. Do you agree? The winner of the seven-furlong Prix de la Foret (G1) at Longchamp in October, One Master contested the 2018 Breeders’ Cup Mile and ran a big race in defeat, when he finished fifth, beaten just a length for all the money. One Master’s European form will never be particularly flashy, because she doesn’t quite have the stamina to handle the test of a stiff, straight mile—just look at her third-place finish in the Queen Anne Stakes (G1) at Royal Ascot, where she rallied to take the lead, only to lose it in the final sixteenth and finish third. But the stamina to handle a straight mile isn’t critical for excelling over a tight-turn U.S. racecourse like Santa Anita, where One Master’s excellent turn of foot can make her more effective than more stamina-oriented European milers. This is something of a hunch, but Win Win Win showed flashes of serious talent on dirt during the winter and sprin,g despite being a son of the turf miler Hat Trick. Following a couple of unsuccessful runs in the Kentucky Derby (G1) and Preakness Stakes (G1), Win Win Win cut back to a mile and switched to turf for the Manila Stakes at Belmont, where he produced a powerful rally to win in 1:31.56, just 0.33 seconds off the course record. Considering his pedigree, it’s possible Win Win Win has found his niche as a turf miler, and if he progresses with maturity, he could be a dangerous force come November. This 6-year-old veteran picked up his first group 1 victory in the Queen Anne Stakes at Royal Ascot, where he rallied from the back of the pack to take the lead and held off a late challenge to prevail by a neck. His only previous trip to North America wasn’t very productive, as he finished sixth in the 2018 Woodbine Mile (G1), but it’s worth noting Lord Glitters received an absolutely impossible pace setup that day and wasn’t able to make an impact, despite running the final half-mile in less than :44. Don’t hold this defeat against him—with a better setup in the Breeders’ Cup Mile, he could be much more effective. You can argue he benefited from securing an uncontested lead in the Shoemaker Mile Stakes (G1) at Santa Anita, but Bolo set an honest pace in that “Win and You’re In” qualifier and still found enough to defeat a deep and competitive field by 1 1/4 lengths. Among his beaten rivals were Delta Prince, winner of the Maker’s 46 Mile (G1), and Catapult, runner-up in the 2018 Breeders’ Cup Mile. With four stakes wins under his belt going a mile at Santa Anita, Bolo could be a true horse for the course. Although he was beaten a half-length by Win Win Win in the Manila Stakes, I liked the way Fog of War made a strong middle move into a hot pace and fought on gamely to the finish line. This was a big improvement off his sixth-place finish in the Paradise Creek Stakes to kick off 2019 and much more reminiscent of the form he displayed in the 2018 Summer Stakes (G1) at Woodbine, where he clocked a mile in 1:33.90 to defeat future Preakness winner War of Will. As with Win Win Win, if Fog of War improves with maturity, he could become a major player in the Breeders’ Cup Mile division.
Racing