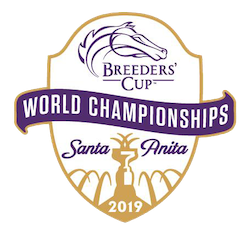 Find out who the official entries are along with the current odds for the 2019 Breeders' Cup Championships.

Below are the latest odds and entries for this year's Breeders' Cup Championships, along with post positions:

How Are the Breeders' Cup Odds Calculated?

If you’re a newcomer to wagering on the biggest days in North American racing, you may wonder how the return you will get for a successful bet is calculated.

The way it’s done is the same for every bet through TwinSpires. It uses a pari-mutuel system in which bettors are effectively competing against other bettors.

Simply put, the money that’s invested on a certain bet type is pooled. The track you’re betting on takes out a certain percentage of that money, which is used to cover expenses and to put into the prize money pool for future races, thus ensuring the jobs and investments of many thousands of employees in Thoroughbred racing, who in some form or another depend on prize money earnings.

Once the percentage has been removed, the return for each horse depends on the amount of money placed on it.

For example, in a 10-horse field with $100,000 invested by bettors on which horse will win, and if 17 percent is removed by the track, there is $83,000 remaining to be distributed to whoever backs the winning horse.

The same formula is used for other bet types like place, show, exactas, trifectas, and other exotic bets.

Bettors playing the Breeders’ Cup will often get a better payout than those playing a normal U.S. race. The rich prize money means there are frequently 12-14 starters, rather than the usual seven or eight. With more horses, the money invested is usually more spread around, thus producing bigger dividends.

So, if you can work out what’s going to win a Breeders’ Cup race, featuring the very best horses in the country (and in some cases, the world), you’re likely to do very well!