What looked to be a match race between Kentucky Derby winner Always Dreaming and the 2016 two-year-old champion Classic Empire, got thrown out of wack by one of the most unlikeliest winners, 14 to 1 shot Cloud Computing.

Cloud Computing was 14 to 1 for a reason. The Preakness Stakes was only his fourth lifetime race. But, as is often the case in horse racing, there are obvious reasons why Cloud Computing won. There's also a devastatingly simple reason why Always Dreaming faded to finish towards the end of the pack.

Before the Preakness, Chad Brown was known as the best grass trainer in the United States. His 2016 wins over the lawn were so numerous that Brown won the 2016 Eclipse for Oustanding Trainer. Among Brown’s turf running stars from last year was Sword Dancer Invitational and Manhattan Stakes winner Flintshire.
Brown also trained tough on her luck second place Breeders’ Cup Mile runner Lady Eli in 2016.

Don’t get me wrong. Brown’s horses have torn it up on the lawn this year. He’s won the Grade 2 Mac Diarmida Stakes with Wake Forest, the Grade 2 Sheepshead Bay with Sea Calisi, and the Grade 1 Gulfstream Park Turf Handicap with Almanaar.

But, Brown’s training job with Cloud Computing was all about getting a three-year-old horse ready for a Triple Crown Race. Cloud Computing appeared to take a step back in the Wood Memorial. Brown decided to keep Cloud Computing on the bench for the Derby. Not only did Brown want a fresh horse going into the Preakness, but he also wanted a more mature horse.

It was the type of moves that the most seasoned Triple Crown trainers, like Todd Pletcher, utilize for their horses. Man, did it work, or what?

Oh, yes, having the great Javier Castellano on board Cloud Computing didn't hurt.

The Derby winner had a full month in between the Florida Derby and the Kentucky Derby. Although I firmly believe that the rail aided Always Dreaming to his impressive score on May 6, I still thought he might run a decent race on May 20.

Looking back on it, my brother Eddie was correct when he pointed out a simple fact. Right after the Kentucky Derby, Eddie pointed out to me that Todd Pletcher preferred to run his horses 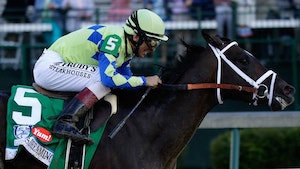 with a lot more than two weeks between races. He told me that Always Dreaming was suspect to win the Preakness Stakes because running a horse back after two weeks just wasn’t what Todd Pletcher usually did.

Always Dreaming’s form suggested that he was going to bounce at Pimlico this past Saturday because his trainer always gives his horses rest between races. Pletcher, like Brown, who learned his craft from Pletcher, usually runs his fresh horse in the Preakness.

Cloud Computing and Always Dreaming Could both Skip the Belmont

Todd Pletcher said that Always Dreaming appeared okay after the race. But since Classic Empire is a definite for the Belmont, it’s hard to see Pletcher throwing Always Dreaming in again versus a horse that has already run the Derby Champ into the ground.