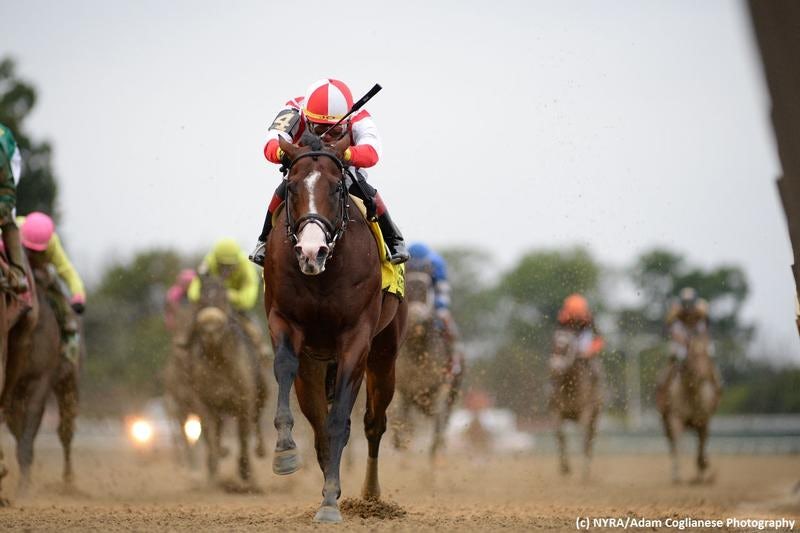 Pure speed is one of the greatest tactical advantages a racehorse can possess, and based on the results of Saturday’s $500,000 Champagne Stakes (gr. I) at Belmont Park, there’s no doubt that Complexity has more than his fair share of pure speed.

How can you beat a horse who can sprint you off your feet and just keep going? It isn’t easy, as Complexity’s nine rivals in the Champagne quickly discovered. With Jose Ortiz in the saddle, the son of Maclean’s Music bounded out of the starting gate and raced to the lead through a :22.51-second opening quarter-mile. Then he threw down a second quarter in :22.80… and a third quarter in :24.09… which was sufficient to give him a 2 ½-length lead while clocking six furlongs in a testing 1:09.40 seconds.

By that point, most of his pursuers were ready to throw in the towel, but Complexity still had plenty left in the tank. While he naturally decelerated over the final quarter-mile, he managed to extend his lead to five lengths at the eighth pole and cruised home from there to stop the timer for a mile in 1:34.63 seconds, the fastest Champagne since champion Uncle Mo clocked the distance in 1:34.51 in 2010.
Complexity’s front-running victory brought his career record to a perfect 2-for-2 and earned him 10 qualification points on 2018-19 Road to the Kentucky Derby, as well as a “Win and You’re In” berth to the Breeders’ Cup Juvenile (gr. I) four weeks from now at Churchill Downs.

But while Complexity’s speed is unquestionable, can he carry it over longer distances? The Champagne was a one-turn mile, whereas the Breeders’ Cup Juvenile will be contested at 1 1/16 miles around two turns. Following the race, trainer Chad Brown voiced some uncertainty about Complexity’s ability to handle the added distance, and the colt’s pedigree (by Maclean’s Music out of the Yes It’s True mare Goldfield) is indeed geared more toward sprints and miles than two-turn route races. It’s also worth noting that the Belmont main track was very fast on Saturday, which may have aided Complexity’s front-running effort; despite the quick final time, the winning Beyer speed figure was just 94, a solid but not overly remarkable number.

With that in mind, perhaps it’s worth keeping an eye on the Champagne runner-up Code of Honor. A stoutly-bred son of Noble Mission trained by Shug McGaughey, Code of Honor was making just his second start in the Champagne and lost nearly all chance at victory when stumbling badly just out of the starting gate. That poor break left Code of Honor in last place early on, about ten lengths off the pace, but he proved resilient from there, unleashing a wide rally around the turn to get back in the race and ultimately finish a clear second, three lengths behind Complexity.

It remains to be seen whether Code of Honor will proceed to the Breeders’ Cup or take a more conservative route, but like Complexity, he showed a lot of promise in the Champagne and the future appears to be very bright for both colts.
Racing