While many harness racing enthusiasts view the Delaware County Fairgrounds and Northfield Park as the two primary ovals in Ohio, this Friday evening many standardbred fans will get quickly acquainted with Dayton Raceway which will host a pair of lucrative stakes for older horses on the latter portion of the card.

Friday's feature race at Dayton is the $150,000 Dayton Pacing Derby for older pacers and the seven horses assembled represent the best of the sport. Reigning horse of the year Wiggle It Jiggleit (Montrell Teague) will leave from post five, while Always B Miki (David Miller) will start from post two just outside of Freaky Feet Pete (Trace Tetrick). But they are by no means the only three horses capable of winning this event.

Wiggle It Jiggleit arrives off a sharp, three-length score in the $150,000 Bobby Quillen Memorial at Harrington Raceway in 1:50 over a sloppy track. Last year's champion three-year-old colt pacer, pacer of the year and horse of the year could add another three Dan Patch Awards to his growing resume since he leads the division with 13 wins and $1.4 million banked from 21 starts and has traveled to numerous ovals to face the best older pacers in the land.

But three spots to his inside is Always B Miki, the ultra-talented Jimmy Takter trainee who has defeated 'Wiggle It' on several occasion 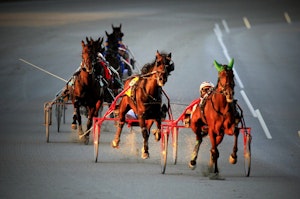 While Wiggle It Jiggleit and Always B Miki are the top two contenders for the champion aged pacer title and both will be vying for favoritism in this affair, the other five pacers in the group all merit respect.

Railbound Freaky Feet Pete sports a 6-3-1 slate and $400,000 bankroll from 14 starts this year and finished second to Always B Miki last week at Hoosier. He has finished ahead of 'Wiggle It' on several occasions this year and also beat him several times last year. Always At My Place has won six of 20 starts for trainer Ron Burke but has been one of the barn's underachievers this season. Luck Be Withyou is wicked fast off the gate and will be looking to garner good early position for trainer Chris Oakes. All Bets Off, who boasts a 3-5-6 slate and $500,000 banked from 21 starts this year, has been Burke's best older horse, while Shamballa has raced well at this level the past two years.

One race earlier it will be the older trotters on display in the $160,000 Dayton Trotting Derby, a race that will likely not impact the division title chase for this group but came up tough nevertheless.

Crazy Wow (Chris Page) drew the rail for Burke, while Maryland-bred Centurion ATM will start alongside him. Shake It Cerry has faced the boys on numerous occasions for Takter and will be a major player here. Wind Of The North, Obrigado, Il Sogno Dream, Maestro Blue Chip and Homicide Hunter are also among the serious contenders.

One race earlier in the $15,000 Open Handicap for older male pacers, Rockin Finish, Atta Boy Dan and Scott Rocks will vie for favoritism despite their assigned outside posts and one race earlier the older pacing mares will clash in the $15,000 F-M Open Hcp where Igottafeelinfran, Skippin By and Rock The Look will also seek to overcome their assigned slots to emerge victorious.
Racing
Loading...