Small pools usually aren't a good thing. But when dollars in small pools are disproportionately on a false favorite, for example a horse in a race at Delaware going off at 8 to 5 instead of 3 to 1, cagey horseplayers can make quite a bit of money.

Check out a profile of 3 tracks that aren't on the minds of most horseplayers:  Arlington, Woodbine, and Delaware.

Arlington's meet doesn't end until Sept. 23. That's almost a full month of excellent racing. The home of the Arlington Million is known for producing excellent grass events. Many times, horses that travel to Arlington to run in its grass races are overbet.

Pay attention to money that goes to local horses in both grass and all-weather track races. Local horses many times have an advantage. When it comes to Arlington's all-weather main track, handicapping based on pace is the way to do it. Speed ratings don't seem to mean all that much. 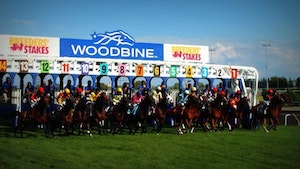 Canada's most famous racetrack doesn't end it's meet until Dec. 10. Woodbine is easily one of the most popular meets for grass trainers in the entire world. The Woodbine Mile regularly produces one of the favorites for the Breeders' Cup Mile.

Like Arlington's artificial main track, Woodbine's can be difficult to handicap. That's okay because if you do hit an exotic on a race over Woodbine's main track more often than not the payout is tremendous.
Delaware Park

That doesn't mean horseplayers can't make money by betting against successful trainers. In fact, that's the best way to make money at Delaware. Going against common thinking is a great way to ensure the most profit on winning tickets.

West Coast horseplayers remember Bay Meadows. The best way to ensure the most profit betting on races at Bay Meadows was to go against Jerry Hollendorfer and Russell Baze. You'd never make a healthy ROI betting on those two in every race.

Delaware Park is the same way. Find the winningest jockey/trainer combination in the race and leave it off your exotic plays. You won't hit a lot of tickets at Delaware, but when you do, you'll be assured of cashing at overlay odds.