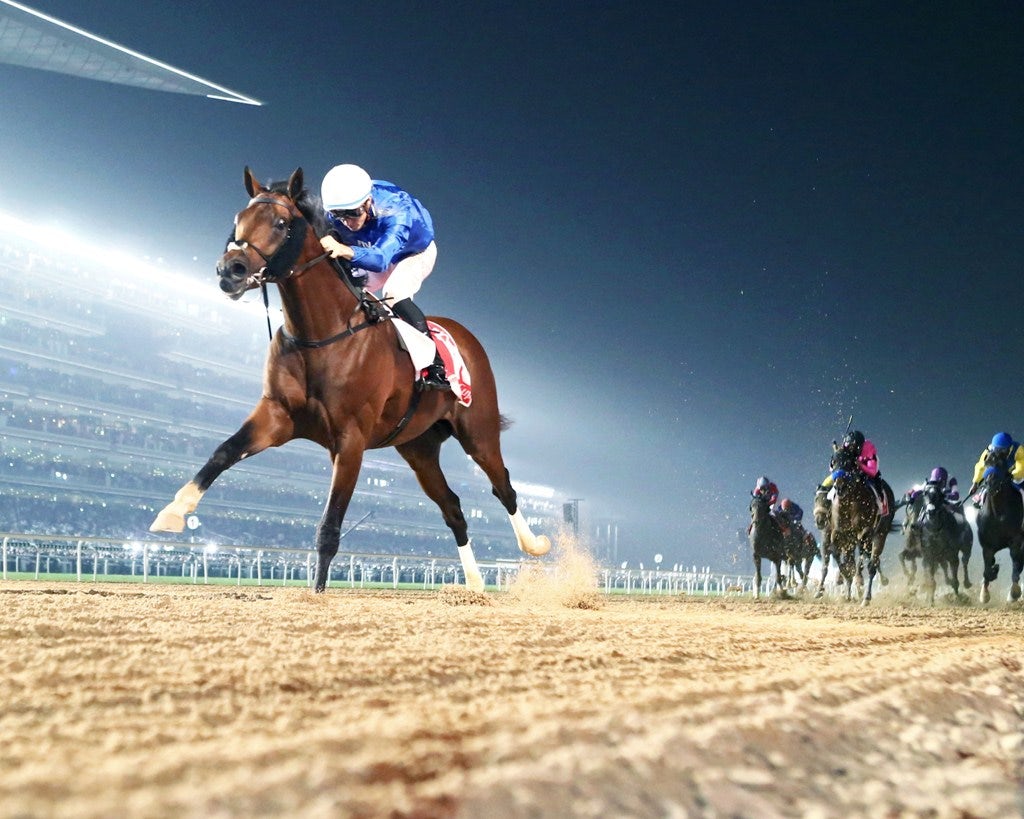 From the deserts of the Middle East to the bluegrass of Kentucky, who’s coming to Churchill Downs by way of Dubai?

With 170 Kentucky Derby qualification points on the line in the March 30 UAE Derby (UAE-II) at Meydan Racecourse in Dubai, we're bound to see one or two horses use the desert challenge as a springboard to Churchill Downs. Although no UAE Derby starter has ever prevailed in the Kentucky Derby, the race has consistently produced Derby starters, including Mubtaahij, Lani, Thunder Snow, and Mendelssohn since 2015.

We’ll get a look at some of Dubai’s top candidates on February 7 when the UAE 2,000 Guineas (UAE-III) is held at Meydan. The one-mile race has attracted eight starters, but none more prominent than #3 Walking Thunder, who is unbeaten and unchallenged in three starts at Meydan. The Florida-bred son of Violence has plenty of early speed and used it to crush a dozen rivals by nine lengths in the UAE 2,000 Guineas Trial last month. Notably, the distant runner-up—Manguzi—came right back to win the Al Bastakiya Trial at Meydan, flattering the form of Walking Thunder’s dominant victory.
Quite frankly, I’d be pretty surprised if Walking Thunder is beaten on Thursday. He’s a clear standout and should sit a perfect trip setting or stalking the pace. Making money on the race could be difficult, especially if the Al Bastakiya Trial runner-up #1 Estihdaaf finishes second for the always-dangerous owner/trainer duo of Godolphin and Saeed bin Suroor, but maybe we can catch a price or two underneath. #6 Moshaher, a son of Goldencents, was an easy debut winner going a mile at Meydan one month ago for top trainer Doug Watson, and #7 Sporting Chance (a Group 3 winner in France) has endured somewhat troubled trips in two turf sprints at Meydan and could be an interesting longshot if he takes to dirt and gets away to a more alert start.

Want to play the race? Then let’s shoot for a score in the trifecta:

Of course, the UAE Derby should be considerably more competitive than the UAE 2,000 Guineas. An impressive total of 37 U.S.-based horses have been nominated to the UAE Derby, including nine from the barn of Todd Pletcher and seven trained by Kenny McPeek. It’s impossible to say which horses (if any) might make the trip to Dubai, but notable names on the roster of nominees include the graded stakes winners Improbable and Mucho Gusto (both from the barn of Bob Baffert)  plus the Breeders’ Futurity (gr. I) winner Knicks Go, the top filly Bellafina, and the recent Holy Bull Stakes (gr. II) winner Harvey Wallbanger.

A sizable group of horses from Japan have also been nominated, led by Derma Louvre, who finished a close second in the Zen-Nippon Nisai Yushun in December, earning eight points on the Japan Road to the Kentucky Derby. Assuming all goes well with his prep run in the February 17 Hyacinth Stakes at Tokyo Racecourse, it sounds like he’ll make the trip to Dubai.

What else should we be looking forward to at the Dubai World Cup Carnival? A wide-open Dubai World Cup (UAE-I) for one thing. With no standout U.S. runners targeting the race, Meydan’s 1 ¼-mile showpiece on March 30 figures to be a wide-open event. McKinzie, Gunnevera, Yoshida, and Bravazo are possible starters, but at this point they’re not in the same league as recent Dubai World Cup winners California Chrome and Arrogate. You can check out some of the local contenders in Thursday’s Al Maktoum Challenge Round 2 (UAE-II), where the very talented (but somewhat inconsistent) North America looms as the horse to beat off a nine-length romp in the Al Maktoum Challenge Round 1.

In other developments, the Japanese Filly Triple Crown winner Almond Eye is targeting the Dubai Turf (UAE-I), where she’ll showcase her sensational talent on an international stage for the first time. Meanwhile, the veteran Vazirabad is tentatively scheduled to seek an unprecedented fourth consecutive victory in the two-mile Dubai Gold Cup (UAE-II), and U.S. sprinters such as Roy H and Imperial Hint could be among the favorites in the Dubai Golden Shaheen (UAE-I).

Suffice to say, the next two months of racing in Dubai should be fun to watch unfold!
Racing