Both thoroughbred and standardbred racing are often perceived as being dominated by wealthy owners with horses of impeccable breeding, but occasionally, as was clearly the case last Saturday night at The Meadowlands in New Jersey, it was a pair of Cinderella stories that earned top billing.

Heading into the $750,000 Meadowlands Pace final for three-year-old pacing colts, much of the attention was focused on Wiggle It Jiggleit, an oddly-named son of Mr Wiggles - who stands in Indiana - owned and trained by George Teague, Jr. and driven by his son, Montrell Teague. George Teague, Jr. had gained national recognition 10 years earlier thanks to the efforts of his sensational pacing filly, Rainbow Blue, who would win 20 of 21 starts an at age three en route to being horse of the year.

While Rainbow Blue was winning numerous major stakes across the continent with Hall of Fame catch driver Ron Pierce in the bike, Montrell Teague was simply biding his time. He would eventually get his chance to drive several very good pacers for his father, including Custard The Dragon, a multiple open stakes winner. But this season he has displayed skill and patience behind Wiggle It Jiggleit, the top rated horse of either gait or any age, whose lone defeat was a second-place finish behind Wakizashi Hanover in the $1 million North America Cup at Mohawk. 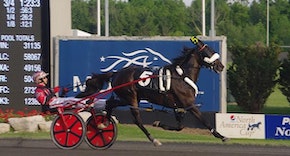 But last Saturday night in the Meadowlands Pace final, Wiggle It Jiggleit notched his third straight win against Wakizashi Hanover, who settled for third after a demanding first over journey, as the son of Mr Wiggles posted his 14th win in 15 starts this year and pushed his seasonal earnings close to $1 million. Both Teagues grew up in a small town in Virginia on the Delmarva peninsula but now are regulars at Harrington Raceway in Delaware where Rainbow Blue called home for three years during her Hall of Fame career.

Then one race after Wiggle It Jiggleit captured the Meadowlands Pace, JL Cruze (John Campbell) continued his amazing start to the season for trainer Eric Ell and owner Kenny Wood of Denton, Maryland. After winning only four starts and less than $30,000 last year, JL Cruze has emerged as the best trotter in North America. The "Denton Destroyer" has won 16 of 18 starts this year and over $625,000 thanks to a determined score in the $450,000 Hambletonian Maturity for four-year-old trotters last Saturday night.

In fact, JL Cruze has emerged as the best trotter in the land during a season in which many pundits had all but crowned Father Patrick, last year's champion three-year-old colt trotter, as champion older trotter and an early favorite for horse of the year. While JL Cruze has been nearly unbeatable in a busy campaign this spring and summer, Father Patrick is among the short list of flops in 2015 along with reigning horse of the year, JK She'salady and Artspeak, who was thumped again in the Meadowlands Pace final.

Both Wiggle It Jiggleit and JL Cruze also train within 25 miles of one another on the eastern shore, with the pacer in Delaware and the trotter in Maryland. Both, as do many beach-bound vacationers, travel frequently along Maryland route 404, a quiet stretch of highway through much of the year but generally hectic on holiday weekends beginning with Memorial Day. Both Cinderella stories currently occupy the top top spots in the National Top 10 poll and neither looks willing to relinquish thier slots to any rival right now.
Racing
Loading...