Former claimer could challenge for victory in Dueling Grounds Derby 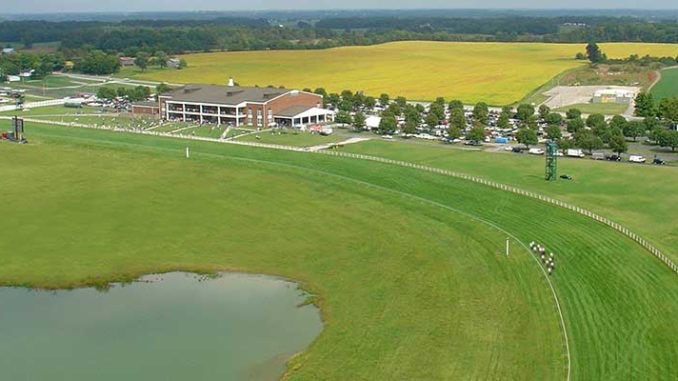 I’ve written frequently in the past about trainer Mike Maker and his remarkable ability to claim grass runners, stretch them out in distance and turn them into stakes winners.

On Saturday, Maker’s skills will be put to the test when #4 Temple contests the $600,000 Dueling Grounds Derby at Kentucky Downs. At first glance the 3-year-old gelding appears overmatched, but dig a little deeper and you can start to smell the makings of a major Maker upset.

He is a son of the long-winded and stoutly bred Temple City, whose most successful runners to date have excelled going a mile or farther, and Temple’s broodmare sire is Quiet American, another capable route runner who has sired similar sorts.

You can make a case Temple has been crying out to run 1 1/2 miles all along, and Maker is leaving no stone unturned in his quest to give Temple the best chance at victory. He’s bringing the gelding to Kentucky Downs, a unique European-style turf course where Maker has won at a 20% over the last five years. Maker has also secured the services of jockey Florent Geroux, who has ridden more winners at Kentucky Downs (40) than any other jockey over the last five years.

This brings us to Temple’s race record, which is better than you might expect for a former claimer. He lost his first seven starts and graduated for a $20,000 claiming tag going a mile at Gulfstream Park. But after he secured that decisive victory—he won by 3 3/4 lengths—the lightbulb seemed to come on. Facing winners for a $20,000 tag, Temple surged to a six-length victory going 1 1/16 miles at Gulfstream, then came right back to win by 3 1/2 lengths at the $35,000 level, where he covered the final quarter of the one-mile event in :23.08.

With three straight blowout wins under his belt—all against older horses while stepping up in class each time—Temple appears to have turned a corner. Now that he’s stretching out in distance and facing fellow 3-year-olds, there’s no telling how high he might ascend. If Maker’s past performances are any guide, a stakes victory in the Dueling Grounds Derby wouldn’t just be unsurprising—it would practically be expected.

Since Temple’s record as a claimer will ensure he starts at a fair price, I’ll make a straightforward win bet my main play. I’ll also key Temple in the exacta with #9 Journeyman (winner of the grade 3 Canadian Derby), #6 Channel Island (a well-bred son of English Channel conditioned by Maker) and #1 Social Paranoia (who drops in class after solid efforts against tougher company in the Belmont Derby and Saratoga Derby).