The first of the Challenge events will be the $36,720 Adequan Prairie Meadows Derby Challenge. The likely favorite will be Justified, a son of Foose, who is in pursuit of his fourth consecutive win. He has already qualified for his trip to California with a victory in the Canterbury Park Derby on July 10.  He will be making his debut at Prairie Meadows, after good campaigns at Les Bois, Turf Paradise and Canterbury Park.  Jess Paint Your Lips, who will break to the outside of Justified, has won three of her four career starts.

Perkin Desire was the fastest qualifier in trials run two weeks ago for the $53,100 John Deere Prairie Meadows Juvenile Challenge. The Colorado-bred daughter of Desirio made three starts at Arapahoe Park before shipping to Iowa. She won her trial from post position three and drew the same spot for the 350-yard final.

Send Me This Wagon will make her first start in more than three months in Saturday’s 400-yard, $32,580 Merial Prairie Meadows Distaff Challenge. Now 5-years-old, the daughter of Pyc Paint Your Wagon is the high-earner in the field. Her toughest challenge should come from Bye Bye Birdy who punched her ticket to California with a win on July 17 at Canterbury. 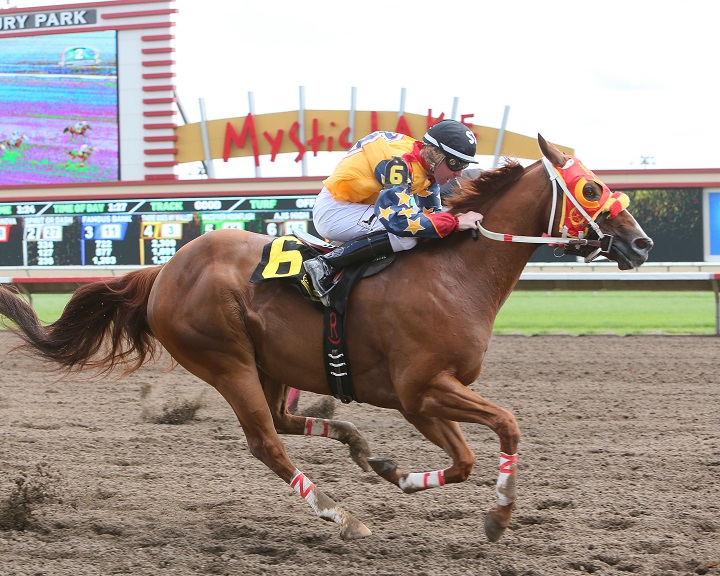 The final contest of the afternoon is the 440-yard, $74,340 Bank of America Prairie Meadows Championship Challenge Stakes (G2).  AJs High, who has won 12 of 18 starts, is the even-money choice. The 4-year-old son of Apollitical Jess has done his best running in Iowa, with six wins from eight starts. His ten rivals include Hialeah Park stakes winner Habits Secret and Tempting Valor, stakes-placed at Canterbury and Remington Park. The winner will advance to the $350,000 Bank of America Challenge Championship (G1) with an invitation to the $600,000 Champion of Champions should he win on October 29.