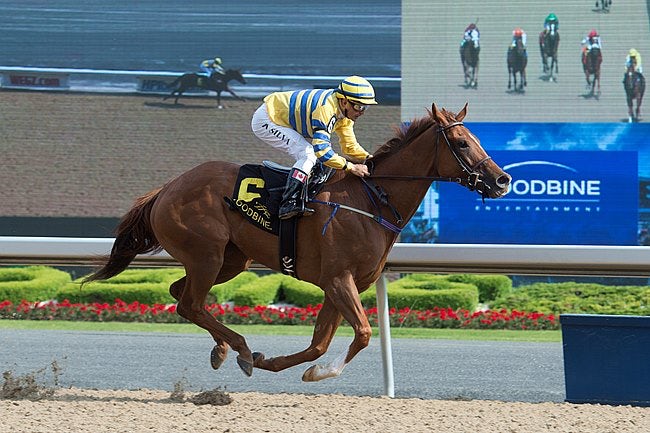 Churchill Downs and Del Mar take center stage in racing this Thanksgiving weekend, but there’s no shortage of top quality racing around North America for players to look at.

Graded races will be held at Aqueduct, Golden Gate, Hawthorne, and Woodbine, each including some of the better horses that have raced in 2017.

Two graded stakes are run at Woodbine in Canada this weekend, and one has implications for the Sovereign Award for Canadian Horse of the Year. Pink Lloyd has started in seven races, all stakes, and won all seven, the most notable being the Vigil Stakes (G3). Victory in the six-furlong Kennedy Road Stakes (G2) on Saturday on Woodbine’s all-weather track could well earn him the Sovereign Award.

Bold Venture Stakes (G3) winner Ikerrin and the recent Belmont Park allowance winner Tombelaine look to have the best shot of beating Pink Lloyd, whose last defeat was a runner-up finish in this race last year.

The other graded stakes race at Woodbine is the seven-furlong Bessarabian Stakes (G2), for fillies and mares on the all-weather. Moonlit Promise should be favorite as she seeks her third consecutive victory, having won the Ontario Fashion Stakes (G3) Oct. 28. Stepping up in class to take her on is Scotty’s Model, winner of three consecutive allowance races, while other contenders include Ontario Fashion Stakes runner-up Minks Aprise, Ruling Angel Stakes winner Sister Nation, and the River Memories Stakes runner-up Boreale.

At Aqueduct, six horses head to the post Nov. 25 for the 1 1/8-mile Discovery Stakes (G3) for 3-year-olds. It’s a good field that even includes a Classic placegetter – Senior Investment, who finished third in the Preakness Stakes after winning the Lexington Stakes (G3).

Most of the field have some stakes form: True Timber and Bonus Points were both in the money in the Withers Stakes (G3) and Jerome Stakes (G3) at Aqueduct earlier this year, while Control Group and Can You Diggit finished second and third, respectively, in the Empire Classic Handicap behind the well-regarded Twisted Tom. The remaining runner is the morning-line favorite Spieth, who has looked good in allowance races in the New York area.

In Chicago, the time-honored Hawthorne Gold Cup (G3) is held Saturday. The 1 ¼-mile contest was formerly one of the premier handicaps in the country – its winners include Round Table, Kelso, Dr. Fager, Equipoise, and Awesome Again – and it still draws a good field of handicappers. The consistent 5-year-old Eagle and the 2016 Marathon Stakes (G2) winner Scuba head a field of eight.

A full field of 14 runners contest the 1 1/16-mile Berkeley Handicap (G3) on the Golden Gate all-weather on Saturday. The morning-line favorite is the multiple graded stakes winner Hard Aces; he has a class advantage over most of the runners, but how he handles a drop back in distance from his third-place finish in the 1 ¾-mile Marathon Stakes (G2) Nov. 3 will be key.

If Hard Aces doesn’t have the zip required at 1 1/16 miles, then watch for horses like Force and Camino Del Paraiso, first and second, respectively, in the Rolling Green Stakes at Golden Gate Sept. 17; Seattle Serenade and Street Moxie, the first two home in the Bull Dog Handicap at Fresno Oct. 15; All American Stakes (G3) winner G. G. Ryder; and the recent allowance winners Editore and Rye.
Racing