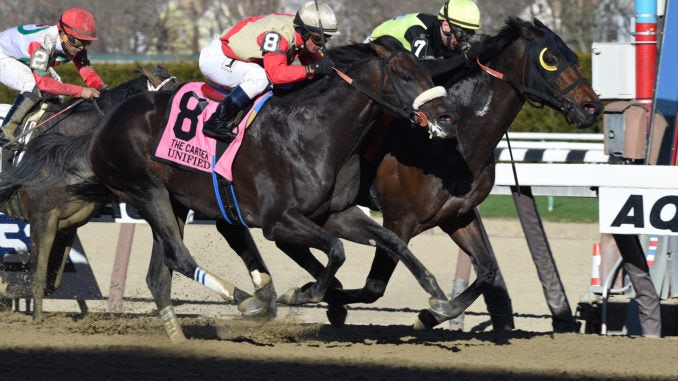 Although the major racing action on December 23rd is relatively quiet, with just five stakes races scheduled to be run in North America, Aqueduct racetrack in New York will keep things interesting with a nine-race card that includes two stakes races.

The $100,000 Gravesend Stakes, the seventh race on the card, is arguably the highlight of the day. The six-furlong sprint has attracted eight starters, including Threefiveindia, runner-up in the Fall Highweight Handicap (gr. III) at Aqueduct one month ago. Trained by Chad Brown, the son of Street Hero has yet to win a stakes race, but has placed in several and appears to have found the perfect spot to seek a defining victory. The four-time Eclipse Award-winning jockey Javier Castellano has the mount.

Green Gratto won the Carter Handicap (gr. I) at Aqueduct back in April but has gone 0-for-7 since then, most recently finishing sixth in the Fall Highweight. The Gaston Grant-trained runner could be a dangerous longshot if allowed to secure an uncontested lead, but such a perfect trip seems unlikely thanks to the presence of Chief Lion, a very fast seven-year-old gelding that enters the Gravesend off a gate-to-wire win in the Fabulous Strike Stakes at Penn National.

The eighth race on the card is the nine-furlong $125,000 Queen’s County Stakes, in which the well-bred Kiaran McLaughlin-trainee Watershed—winner of Keeneland’s Ben Ali Stakes (gr. III) in the spring—will attempt to end a three-race losing streak while making his second start off a layoff. He’ll face eight rivals led by Senior Investment, a three-year-old that defeated likely Eclipse champion West Coast in the Lexington Stakes (gr. III) back in April. The Kenny McPeek runner hasn’t won in five starts since then, but has shown improvement since taking a brief break during the summer, returning to finish fourth in the Ontario Derby (gr. III) and most recently second in the Discovery Handicap (gr. III). The Queen’s County will mark his debut against older rivals.

Discreet Lover, who defeated next-out graded stakes winner Fear the Cowboy in the Swatara Stakes at Penn National last month; Securitiz, winner of the nine-furlong Seattle Slew Stakes at Belmont two starts back; and Kurilov, decisive winner of the Grade 1 Gran Premio Hipodromo Chile back in May, are among the other prominent entrants in the Queen’s County.