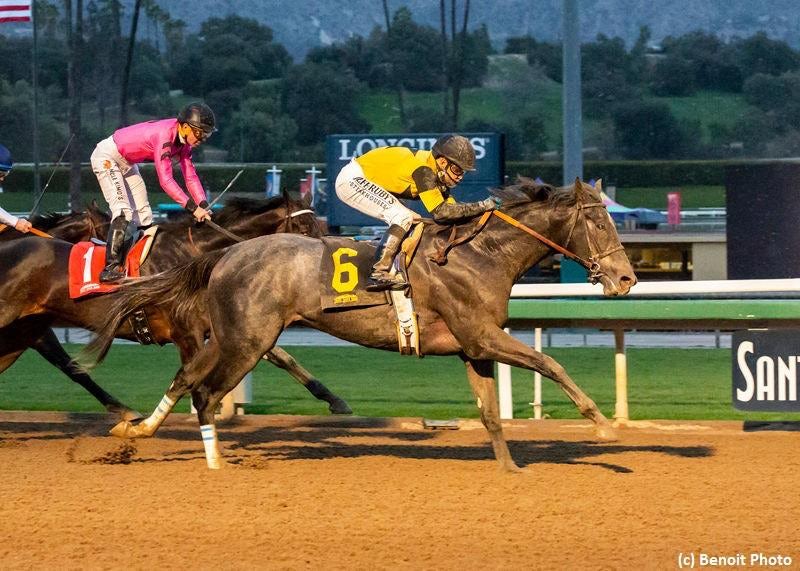 When the dust settled in the aftermath of Saturday’s $100,000 Sham Stakes (gr. III) at Santa Anita, racing fans were surely left scratching their heads over one of the strangest Road to the Kentucky Derby prep races in recent memory.

Much of the pre-race hype centered around Bob Baffert’s promising debut winner Coliseum, a quirky son of Tapit who started as the overwhelming 3-5 favorite. But when the gates opened for the one-mile race, Coliseum came out awkwardly and spotted the field a length or two almost immediately, which left him racing wide and near the back of the pack after the opening quarter-mile. From there, he failed to settle particularly well and flattened out after a mild rally to eventually finish sixth.

This left Coliseum’s stablemate Much Better in a position to save the day, and after tracking quick fractions of :23.46 and :46.95, the well-bred son of Pioneerof the Nile blasted to the front through six furlongs in 1:11.64 and appeared to have the race wrapped up. Passing the eighth pole, he was in front by 2 ½ lengths and no one was gaining much ground.

But then Much Better took a detour toward the inner rail, changing back to his left lead and suddenly losing all his momentum. In the blink of an eye, Much Better’s lead was gone, and as he decelerated sharply he was passed with explosive suddenness by the patiently-ridden Gunmetal Gray, who was flying down the center of the track under jockey Mike Smith.
Gunmetal Gray, coming off of a fifth-place finish in the Breeders’ Cup Juvenile (gr. I), was the clear second choice in the wagering, though his backers must have surely been feeling antsy halfway through the race, when Gunmetal Gray was disconnected from the main body of the field and trailing by a wide margin.

“I didn’t expect to be that far back,” Smith told Santa Anita publicity after the race. “I got taken off my game plan a little bit. Coliseum kind of slipped and broke to the right. He really hit me in behind and set me farther back than I wanted to be.”

But in the end, the fast early/slow late race shape of the Sham played directly to Gunmetal Gray’s running style, and the son of Exchange Rate rolled to victory by a length in 1:38.96 seconds. His late rally was aided by a final quarter-mile timed in :27.32 seconds, with the final furlong elapsing in a particularly slow :14.10.

“He got up, got back into the race somewhat and got into a nice, comfortable stride,” said Smith. “I figured from that point that he would run well, we just had to be good enough to catch them and he was.”

Sueno, coming off of a victory in the Gold Rush Stakes over the Tapeta track at Golden Gate Fields, produced a mild finish to secure the runner-up spot, three-quarters of a length in front of Much Better. Gray Magician, Easy Shot, Coliseum, and the pace-setting Savagery rounded out the field.

For his victory, Gunmetal Gray received 10 Kentucky Derby qualification points, bringing his total to 14 and placing him fourth on the current leaderboard. Trained by Jerry Hollendorfer, Gunmetal Gray was bred by Lee Pokoik and races for a partnership comprised of Hollendorfer, Pearl Racing, and West Point Thoroughbreds.
Racing