Handicap the Kentucky Derby Like Any Other Horse Race

Because it's the Kentucky Derby, there's a tendency to over think it. Horseplayers aren't the only ones that overthink the Kentucky Derby. Remember War Emblem winning the Derby in 2002? War Emblem led gate-to-wire to take home the roses that year. How did War Emblem do it? His jockey, Victor Espinoza, decided to go for the lead even if everyone else believed the pace was going to be swift.

The other jockeys laid off War Emblem. Victor rode him to a first place win. Those other jockeys over thought the Derby. That's why they lost. Don't over think the Kentucky Derby. It's just another horse race.

Below, I attempt to handicap the Derby as if it's another horse race.

Handicap the Kentucky Derby Like Any Other Horse Race

On the surface, the pace looks to be crazy fast. Not so fast, though. Audible, listed here above winning the Florida Derby, can run up front or come from the clouds. Mendelss 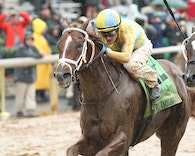 ohn ran just off to win the BC Juvenile Turf while although Justify was on the lead in the Santa Anita Derby, he ran the half-mile in 47.4. That's not incredibly fast. That's cruising for a horse like Justify.

Favorites that Can Rate

Like I wrote above, the favorites for the Run for the Roses this year can all rate. Justify can rate.
Mendelssohn can rate. Audible can rate. Magnum Moon can rate. Good Magic can rate. So can Bolt d'Oro.

That means the front runners could end up being cheap speed horses like Bravazo and Promises Fulfilled. Then again, at their fastest neither Bravazo nor Promises Fulfilled can keep up with Mendelssohn's and Justify's cruising speed.

Longshots that Can Rate

Instilled Regard can definitely rate. So can Vino Rosso, Enticed, and Solomini. Again, that doesn't mean those horse can win on Saturday. It does mean those horses have a shot to get into the super and tri.

Come From the Clouds Contenders

There are two come from the cloud horses that could give their backers a thrill late in the Derby on May 5:  My Boy Jack and Hofburg. Hofburg can stick closer to the pace if need be. My Boy Jack will come from well off it. Both can sneak into the tri and super

Closers with a shot - Hofburg, My Boy Jack

From the looks of it, the winner on Saturday should come from one of the 9 horses above listed. If you feel that the cheap speed messes with Mendelssohn, Justify, and Magnum Moon, it might be worth looking at one of the true pressers to get it done. If you feel that the true pressers also end up suffering from the pace, Hofburg and My Boy Jack might be the plays on top.