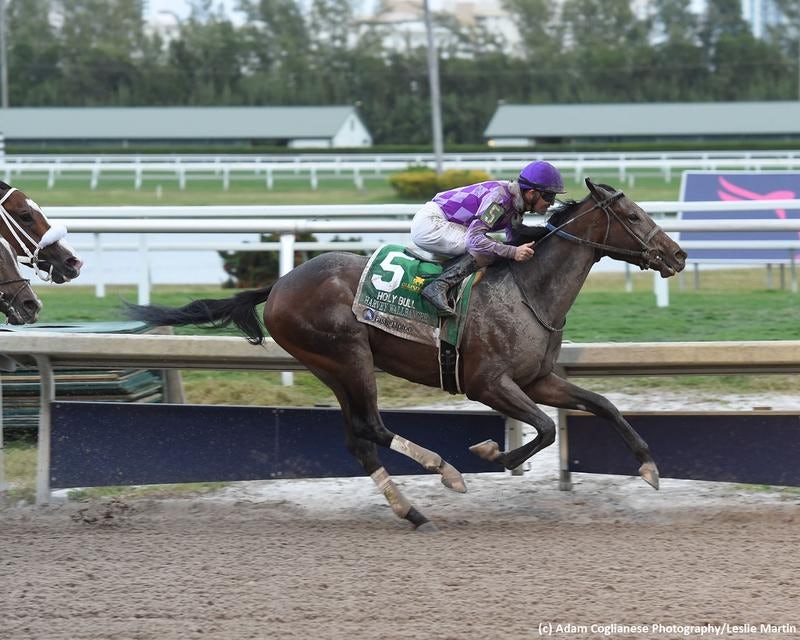 Harvey Wallbanger spent much of Saturday’s Fasig-Tipon Holy Bull Stakes (gr. II) at Gulfstream Park racing in last place, but the 29-1 shot made the last move and ultimately had the last laugh as he rallied to post a stunning upset victory.

The early pace of the 8.5-furlong Road to the Kentucky Derby prep race wound up more contested than expected as Epic Dreamer raced away to establish a clear lead while heavy favorite Maximus Mischief was hard-urged out of the gate to secure a forward position and avoid racing wide on the first turn. The result was Epic Dreamer carving out quick fractions of :23.18, :46.76, and 1:10.89, which spread out the nine-horse field over ten lengths.

Rounding the far turn, many expected Maximus Mischief to seize command and draw away to his fourth straight resounding victory, but the 9-10 favorite came under pressure surprisingly early and struggled to close the gap on Epic Dreamer. As the two front-runners decelerated through a fourth quarter-mile in just :25.91 seconds, Maximus Mischief finally got the better of his rival, but by then both were exhausted and vulnerable to late runners.

Enter Harvey Wallbanger. Under a perfect ground-saving ride from Brian Hernandez, Jr., the son of Congrats came roaring up the rail in the final strides, pulling clear to win by a length in the time of 1:43.69 seconds. Even more surprising than the winner was the runner-up, Everfast, who saved ground behind the leaders before shifting out and rallying late to edge Maximus Mischief for second place at the staggering odds of 128-1.
The Holy Bull marked Harvey Wallbanger’s 2019 debut as well as his first run against winners. Last year, he competed in four maiden races, finishing second on three occasions before breaking through with a victory on November 17 at Churchill Downs.

“It’s a horse race. You can’t duck one, can you? He showed he had some good, solid ability. I was thinking he’d rise up to whatever level you put him in,” winning trainer Kenny McPeek told Gulfstream Park following the race. “All we did last fall was really kind of teach him what to do. The end of the season he was a little tired after his fourth race and we backed off, came down here, and took our time.

“I had some options to run in an a-other-than and I told [co-owner] Harold [Lerner], ‘Let’s find out how good he is, because he can’t be training any better,” McPeek added. “Today, I told Brian, ‘If they go, let them go. Don’t worry about it. Just tuck in, save some ground, and make your run.’”

The strategy worked to perfection and earned Harvey Wallbanger 10 qualification points for the 2019 Kentucky Derby. Maximus Mischief earned two points for his third-place finish and brought his total to 12 points, though jockey Jose Ortiz was naturally disappointed with the favorite’s performance.

“He broke good, clean. He sat second behind the speed, but I felt like they were coming on my outside, so I made my decision to go. When I asked him, he wasn’t going the way I wanted him to. I just had to start riding,” Ortiz said. “I had a hard time catching the horse on the lead.”

For the winner—who is owned by the partnership of Harold Lerner LLC, AWC Stables, Nehoc Stables, Scott K. Akman, and Paul Braverman—McPeek indicated that a start in the March 2  Fountain of Youth Stakes (gr. II) at Gulfstream Park could be on the agenda.
Racing