Friday and Saturday night at Remington Park will be very exciting for horsemen and Quarter Horse fans alike. The entire card of both nights will be dedicated to trials for the Heritage Place Futurity (G1), the richest race in the 2016 Quarter Horse meet at the Oklahoma City racetrack. 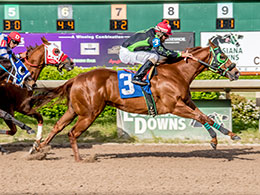 Duponte, winner of the Harrah's Entertainment Futurity, runs in trials for the Heritage Place Futurity at Remington Park on Saturday night

Two dozen 350-yard trials with a total of 198 runners will be run this weekend. The five fastest qualifiers from 12 races on Friday and 12 on Saturday will advance to the final.  The purse is expected to surpass $1 million, so the June 4 final will yield a very rich payout for the talented 2-year-old champion.

Two 2016  futurity winners,  Coronas First Diva and Duponte will take on a slew of lightly raced rivals.  Coronas First Diva, a Corona Cartel filly, trained by Charles “Duke” Shults, drew post 8 and will be ridden by James Flores in the 11th heat on Friday. The filly will be making her first start since March 26, when she scored a three-quarter length victory in the 300-yard, $440,000 Oklahoma Futurity (G2).

Sweet Annie GL, the runner-up to Coronas First Diva in the Oklahoma Futurity, will be ridden by Agustin Silva from post 7 in the eighth heat. A gray gelding by One Sweet Jess who has earned $73,346 from two outs, Sweet Annie GL is trained by R.L. “Rick” Robinson for the Garza Laurel Partnership LLC.
Duponte, winner of the $268,000 Harrah's Entertainment Futurity(G3) at Louisiana Downs, will run in Saturday's first trial.
Duponte, a graded stakes winning son of American Runaway racing for Kristen Ashley Paredes, will make his first start in Oklahoma in Saturday’s first trial. Trained by Josue Ponce, Duponte will be stretching out in distance off of his three-quarter length win in the 300-yard, Harrah’s Entertainment Futurity (G3) at Louisiana Downs on March 23.Francisco Ramirez Jr. will ride Duponte from post 6.

Gregorio Garcia Garza’s El Carretonero G 3, a son of leading AQHA sire, Pyc Paint Your Wagon, trained by Rolando Almanza, will be ridden by Esgar Ramirez from post 4 in the fifth trial. El Carretonero G 3 is coming off of a second-place finish in the 330-yard, $540,000 Sam Houston Futurity (G2) on April 23.

First post time for each night of Heritage Place Futurity trials will be 6 p.m. (Central).