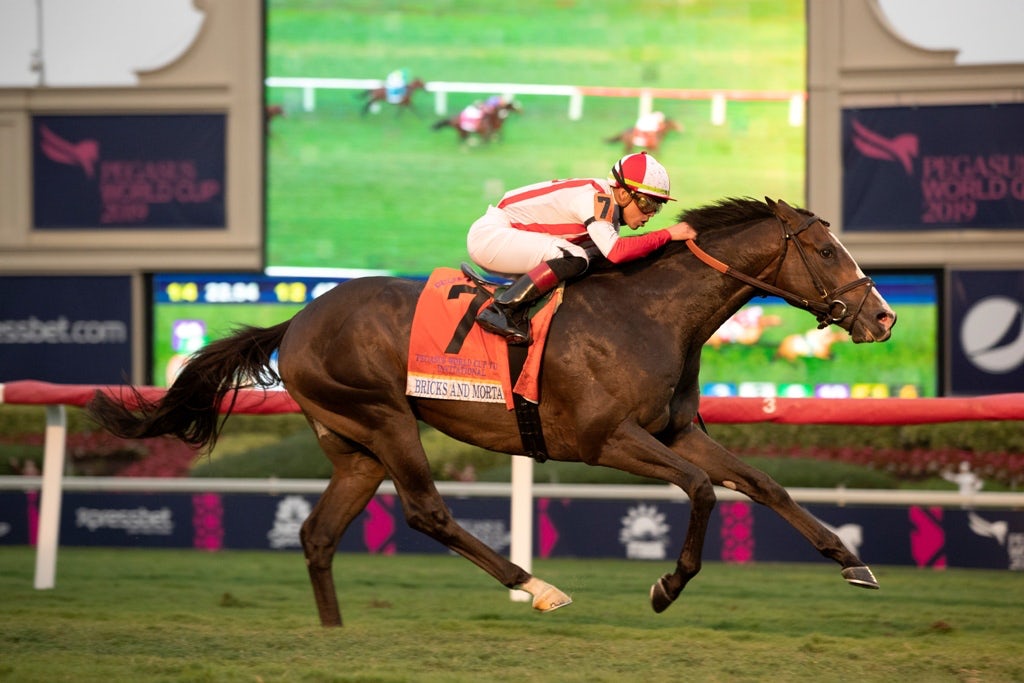 Through the years, Europe has dominated the $4 million Breeders’ Cup Turf (G1), providing 17 of the last 21 winners. But when the 1 ½-mile grass race heads to Santa Anita on November 2, the home team might just steal the show thanks to the sensational #9 Bricks and Mortar.

This son of Giant’s Causeway has shown serious talent and tremendous acceleration since his three-year-old campaign, but he’s been absolutely unstoppable since returning from a long layoff in December 2018. Six subsequent starts have yielded six victories, including four Grade 1 triumphs in the Pegasus World Cup Turf, Old Forester Turf Classic, Manhattan Stakes and Arlington Million.

Bricks and Mortar has never tackled 1 ½ miles, but his best efforts have come in his longest races, and the powerful finishing speed he’s demonstrated suggests he won’t have any trouble stretching out in distance. This is a horse who can sprint a final quarter-mile in :22-and-change like he’s out for a morning stroll. Just look at his performance in the 1 ¼-mile Arlington Million. He didn’t get the cleanest trip in a slow-paced event, but when he shifted out for racing room, he sprinted the final quarter in :22 1/5 to swallow the capable Magic Wand and win easily.
I’m optimistic Bricks and Mortar has picked the perfect year to give the Breeders’ Cup Turf a try. With all the key players from the prestigious Prix de l’Arc de Triomphe (G1) in France skipping the Turf, the European contingent is weaker than usual.

For example, Investec Derby (G1) winner #5 Anthony Van Dyck warrants respect for six-time Turf-winning trainer Aidan O’Brien, but the son of Galileo has been a cut below the division elite in Europe and was soundly beaten in the 2018 Breeders’ Cup Juvenile Turf (G1). The globe-trotting #10 Old Persian could be a more formidable opponent after winning the 1 ½-mile Northern Dancer Stakes (G1) at Woodbine, but he received a perfect pace setup and has likewise struggled to beat the best Europe has to offer.

For these reasons, I’ll take a stand and key Bricks and Mortar on top of my wagers in the Breeders’ Cup Turf. The conditions of the course at Santa Anita (firm going, a downhill start, three turns, and short straights) figure to make the Turf a test of acceleration more than stamina, playing to Bricks and Mortar’s strengths. If the home team is ever going to snatch a victory in the Turf, this looks like the year. Good luck!
Racing