How to play the Arlington Million Pick 4 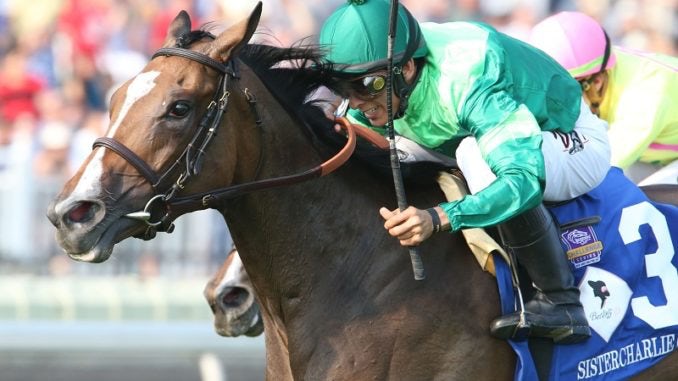 Del Mar and Saratoga have been dominating the horse racing headlines in recent weeks, but they will take a back seat to Arlington Park this weekend, when the Chicago-area racetrack hosts a stakes-packed card, led by the Arlington Million (G1).

There are four graded stakes scheduled, and they’ll be strung together in a high-profile Pick 4 with a $300,000 guaranteed pool. Need some tips for assembling a ticket? Here’s how I would play the Arlington Million Pick 4 on a $25 budget.

#7 Sistercharlie won the Beverly D. last year, on her way to an Eclipse Award as the champion grass mare of 2018. Trained by Chad Brown, who has won the Beverly D. four years in a row, Sistercharlie kicked off 2019 with a decisive victory in the Diana Stakes (G1) at Saratoga and looms as the lone grade 1 winner in the field. With stablemate #8 Thais entered to secure a good pace, anything less than victory would be a surprise for Sistercharlie, so we’ll single her in the Pick 4.

Brown also holds a strong hand in the Secretariat, with #6 Fog of War and #7 Valid Point. The former won the one-mile Summer Stakes (G1) in September over eventual Preakness Stakes (G1) winner War of Will, while the latter is 2-for-2 going a mile and recently won an allowance race at Belmont Park, with a last half-mile in :44.50.

But don’t count out #3 Never No More, who ships in from Ireland for trainer Aidan O’Brien, who has won the Secretariat four times. Never No More is stepping up to graded stakes company for the first time, but he has won three of his five starts sprinting over left-handed courses at Leopardstown, Naas and Dundalk. With his sprinting speed and proven success negotiating reasonably sharp turns, Never No More strikes me as the type of European who can excel going a mile over a tight-turning U.S. racecourse.

Brown’s #1 Robert Bruce won this race last year with a tremendous rally from off the pace, but chances are he’ll be overshadowed this time by stablemate #3 Bricks and Mortar. With four graded stakes wins under his belt this year, including three grade 1 events, Bricks and Mortar is an early frontrunner for Horse of the Year honors.

Bricks and Mortar and Robert Bruce faced off in the 1 1/4-mile Manhattan Stakes (G1) at Belmont two months ago, in which Bricks and Mortar rallied wide to win comfortably by 1 1/2 lengths. With his strong turn of foot, Bricks and Mortar has repeatedly overcome unfavorable pace scenarios, stamping him as a horse to single in the Pick 4.

A dozen 3-year-old fillies will contest this 1 1/8-mile turf race, but unless Brown’s wide-drawn #11 Cafe Americano delivers at a short price (she’s dropping in class out of the grade 1 Belmont Oaks), this race could be difficult to decipher. The pace scenario is muddled with an abundance of pressers, trackers and closers, and there isn’t a single graded stakes winner in the field.

Since we’re using just a handful of horses in the first three legs of the Pick 4, we can afford to spread deep in the Pucker Up Stakes. Let’s hit the “ALL” button on one ticket, then play another ticket singling Cafe Americano. If we can catch a longshot winner, the payoff should be enticing, but if not, our extra money on Cafe Americano should yield a reasonable return on investment.