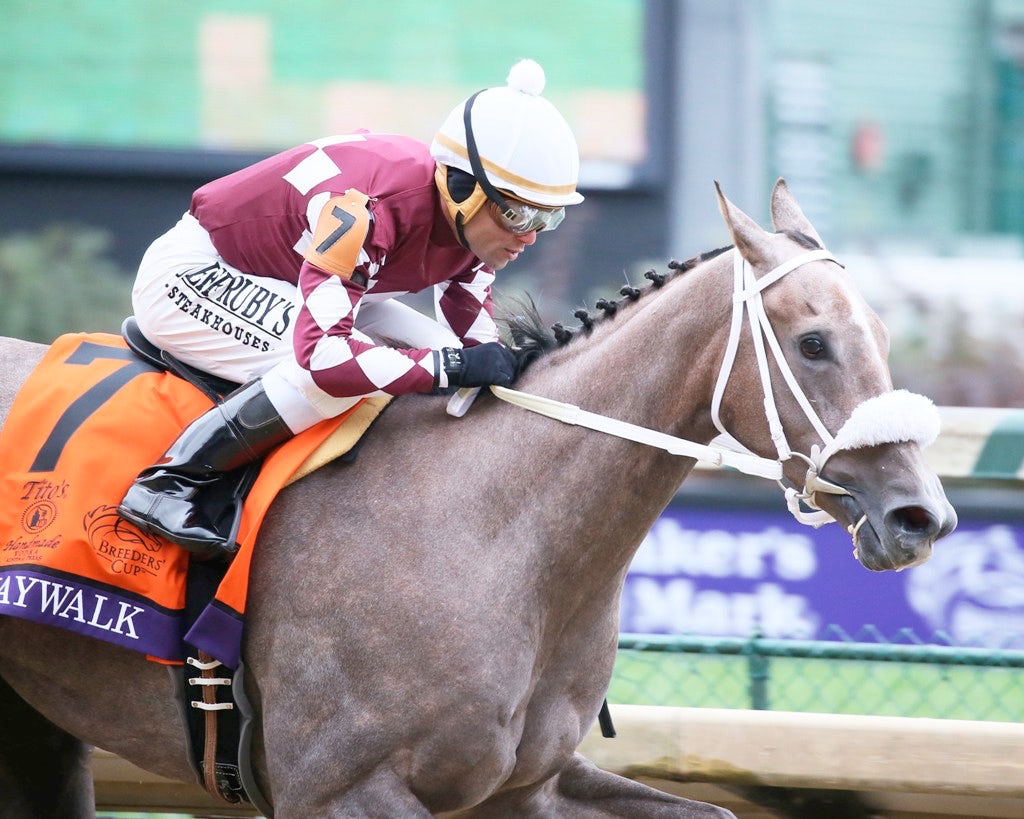 Once upon a time, an increasingly long time ago, a filly named Jaywalk demonstrated that she is indeed mortal by finishing second in her debut at Monmouth Park.

But since that day in June, Jaywalk has looked less and less like a typical racehorse and more and more like a top-notch talent in the making. And on November 2nd at Churchill Downs, Jaywalk brought her game to another level entirely with a resounding 5 ½-length triumph in the Breeders’ Cup Juvenile Fillies (gr. I).

To put it simply, Jaywalk never gave her nine rivals a chance. After sprinting straight to the lead through fractions of :23.23, :46.76, and 1:11.48—an easy pace for the daughter of Cross Traffic—Jaywalk briefly humored her rivals on the far turn, allowing the likes of race favorite Bellafina and the Grade 1 winner Restless Rider to loom up alongside while Jaywalk lost focus for a few strides and attempted to drift out.

But once Jaywalk got her mind back on running, she turned back her challengers with disdain, powering away in the blink of an eye to win by 5 ½ lengths while stopping the timer in 1:43.62 for 1 1/16 miles. Restless Rider fought on to finish second over longshot Vibrance, with Bellafina rounding out the top four, but none of them could claim to have really warmed up Jaywalk, who was much the best under jockey Joel Rosario.
Trained by John Servis, Jaywalk has now won four straight races, a streak that includes a late-running victory in the White Clay Creek Stakes at Delaware Park and a front-running 5 ¾-length triumph in the Frizette Stakes (gr. I) at Belmont that was essentially a carbon copy of her Breeders’ Cup win.

With victories in three stakes races, including two Grade 1s, Jaywalk looms as the most likely winner of the Eclipse Award as the champion two-year-old filly of 2018, while her pure speed and versatility in running style have stamped her as a force to reckon with and a clear early favorite for the 2019 Kentucky Oaks (gr. I) six months from now at Churchill Downs. If she keeps up this level of success—and for the time being at least, there’s no reason to think she won’t—we may someday look back at her first career loss and wonder how anyone ever managed to beat her.

They can chase her, they can try to catch her, but as her rivals discovered in the Juvenile Fillies, the chase is probably going to be in vain.
Racing